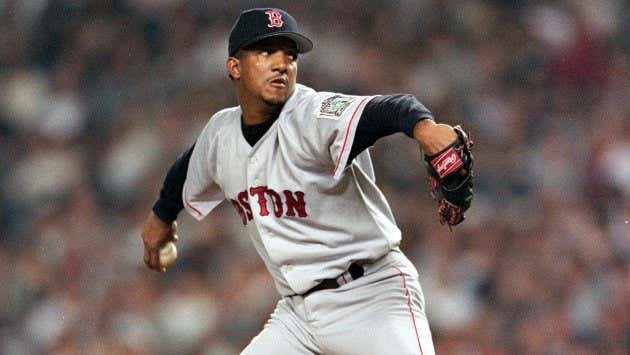 Pedro’s first complete game of the season came with some HEAVY foreshadowing as to how the Indians season was going to end. But we’ll get to that when the time comes.

Pedro was masterful in Cleveland to end his April. Nine innings up against the eternal Bartolo Colon, struck out the icon Manny Ramirez twice, one K for Country Strong Jim Thome, 10 total for Pedro – making this his third straight game with 10 punch-outs. 7 hits scattered throughout yielding only two runs. Against this lineup, on the road, for nine innings, this would be the best start of a lot of guy’s entire season. Maybe if this bum didn’t start off his season with two 9 K games he’d have a longer streak in the works. But I guess nobody’s perfect.

*Random sidenote of the game: it’s insane to me that the ’90s Indians didn’t win at least one ring. The collection of talent on this squad gets more and more absurd every time I look at it. David Justice hit fucking 7th in this game and had like a .900 OPS this year.