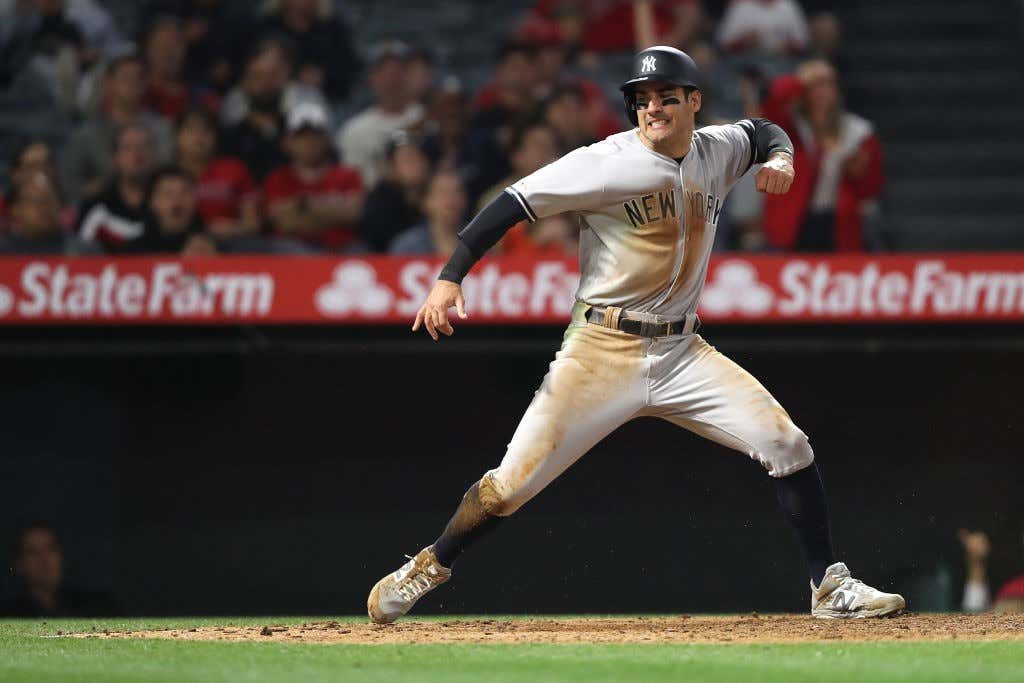 Gritty. Scrappy. Relentless. That’s exactly what the 2019 New York Yankees are. I’m going to get ahead of myself here, but this team through 24 games has that don’t quit mentality that the 2009 team had. It’s next man up, find a way anyway you can. It’s an addicting brand of baseball to watch and I cannot get enough of it.

The Yankees fell behind big early with CC not having it on Wednesday night. He fell three strikeouts short of the 3,000 milestone, which I’m happy he did because he deserves to hit it when he’s pitching well (hopefully in Arizona next week).

The team trailed 5-0 heading into the sixth and it seemed like it would be one of those “you can’t win every night” type of games where we just move on and get some sleep. Well they didn’t hear no bell. One of the heroes tonight, Tyler Wade, led off the 6th reaching on an infield single. He would come around to score on DJ LeMahieu’s double in the left field corner to get the Yanks on the board. DJ came around to score on a wild pitch later in the inning. Hey, 5-2 is way different than 5-0, especially with Felix Pena leaving the game finally. That guy has some NASTY stuff.

Luis Garcia came in relief in the 7th and I wish this guy pitched all the time. He’s just not a good baseball pitcher folks. He immediately loaded the bases with two walks and a looping Gio Urshela base hit. Known power hitter and grand slam threat Tyler Wade stepped to the dish. Garcia wanted no part of that danger and walked him on four pitches, cutting the lead to just 5-3. Genius move on Garcia’s part in my opinion. DJ LeMahieu then hit a sac fly to left center to bring in the Yankees’ fourth run. Phil Hughes brought up a great point with how Trout should have taken control and caught the ball instead of Goodwin.

As a result, both Tauchman and Wade tagged to get to 2nd and 3rd with one out. If Trout catches that ball, he probably gets the ball in quick enough to second and keeps the double play intact. Luke Voit proceeded to hit a tailor made double play ball to Simmons, but the shortstop had to come home to try and get the Sock Man instead of turning it.

His throw stood no match for the blazing speed and elusiveness that Tauchman delivered. I love how the Sock Man gets so fired up. Just like that the Yankees had scratched and clawed their way back to tie this ball game at 5. Incredible.

Gardner then sent a rocket to center but Trout made a Mike Trout play to rob him of a go ahead knock.

On the throw back into second, Simmons tagged Wade just as his foot lifted ever so slightly off of the bag. They reviewed it and called him out for the inning ending double play. Kinda bullshit and not what replay review is intended for, but we won so I’m not complaining.

That set up the Tyler Wade redemption story. With two outs in the top of the 9th, in a tie game, Wade singled through the right side. He immediately stole second and set up DJ to drive him home with a clutch two out knock.

DJ entered this game on a 3 for 39 slide, but came through in the biggest ways tonight. He’s such a gamer. As for Wade, he was huge tonight, especially in that 9th inning. Thank God he was able to redeem himself from that hidden ball trick.

A lot of credit in this one has to go to Johnny Lasagna who came out of the pen in relief of CC to toss three scoreless innings and keep the Angels at just 5 runs. He was nails.

The Yankees are now winners of six in a row and eight of their last nine. The resiliency of this team is fucking impressive, considering who we’re sending out there every night. It’s a true next man up mentality, with a different guy coming up big every night. I love it.

What I don’t love is ANOTHER guy going on the injured list. Clint Frazier’s MRI revealed a slight tear in his ankle and he’s going to miss about 14 days, Boone says. Of course this happens. That’s 15 guys on the I.L. this season. Ridiculous. Your starting outfield for the foreseeable future is Tyler Wade, Brett Gardner, and Mike Tauchman. Your 4th outfielder is Thairo Estrada or DJ LeMahieu, neither having played the outfield in professional baseball. Next man up. Keep taking punches and punch back.