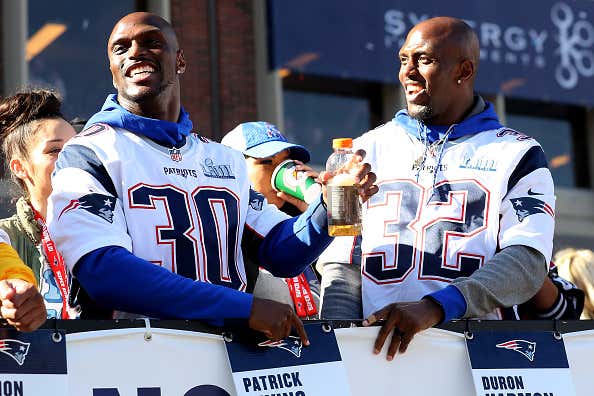 Positional overview: With the draft tonight, I’m doing one final position. Or two, actually, and grouping them together. Mainly because I don’t want to take too deep a dive. Fortunately, defensive back is the most talented, deepest unit on the team, apart from Tom Brady all by himself. Even accounting for the fact they play a base nickel defense and more dime than ever before, they’ve pretty much got it covered. The starting five all had good years and played better as the year went on. There are no looming contract issues as Stephon Gilmore and Pat Chung just got extensions and the McCourty twins came back. JC Jackson has room for improvement but definitely looks the part of the JJ Abrams reboot of Malcolm Butler, but with more reps as he heads into his second season. I successfully predicted they’d draft Duke Dawson last year as a slot corner, and am anxious to see what he can do when healthy. And Obi Melifonwu was a late addition to the roster and a physical freak that they can use in some creative capacity.

So while DB is a low priority, it’s never not a priority to some extent. Since 2000, Bill Belchick has drafted 31 DBs in all, with no less than 10 selections in Rounds 1 and 2 just since 2007. And at both the cornerback and safety positions, it projects to be a good year to be looking for the Patriots next gen secondary.

The Consensus No. 1 Cornerback:

The Defensive Back University that already gave the world Patrick Peterson, Tre’Davious White and Jamal Adams gives us the best DB of the 2019 draft. The earliest scouting report on Andraez Williams came from his grandmother, who recognized his talent for anticipating throws, jumping routes and picking off passes when she nicknamed him as a kid. When Kevin Tolliver was suspended for the first week of 2017, Williams got the start, had an interception, and started every game since. That year finished with 38 tackles, led the SEC with six picks, broke up 11 passes and averaged 1.3 passes defensed per game. He uses his length (31 1/2-inch arms) effectively as a trail technique corner, and has the straight line speed to keep up with vertical routes. The knocks on him are that he needs to add weight in order to be more effective in press coverage and fighting off blocks. Maybe due to his lack of strength he gets on his heels trying to jam receivers and has a bit of a “cover corner” mentality against the run. But he’s a plug & play isolation defensive back from Day One. I’d recommend he copyright “Greedy Island” right away, but I’m pretty sure the producers of “Survivor” already own it.
Compares to the other leading brand: Aqib Talib

Your Other 1st Rounder Corners:

Murphy is a different type of physical specimen from Williams altogether, three inches shorter and still five pounds heavier. And he might actually be better in coverage, with quick feet and a fluid hip turn and an instinctive understanding of route combinations. In his career he was targeted 87 times and recorded seven interceptions and 20 PBUs, which means he made a play on 31 percent of the passes that came his way. He was rarely asked to play press man at Washington, but excelled at it when he was. Against the run he displays a safety’s willingness to take a ride into the danger zone. He might end up as a slot corner in the pros, but has demonstrated he can play anywhere.
Compares to the other leading brand: Denzel Ward

The Jim Thorpe Award winner in his senior season finished with 40 tackles, two INTs and 10 passes defensed. He’s not a guy who’ll jam receivers at the line, opting instead to use his Flash-like metahuman play speed to mirror/match his assignments in off coverage. He might not be the guy you’d iso against an opponent’s No. 1 right now, but he’s played at a high level for three years against the best competition in the country, and is probably better equipped to handle complex pro-style coverage schemes than anyone in this class. He’d be a great fit for a system that relies on a lot of zone.
Compares to the other leading brand: Tre’Davious White

If there’s one common experience all of us share, it’s that we all remember where we were when we heard Presbyterian College disbanded its football program. Well as shocking and tragic as that day was for us all, there is one man who refused to let it deter him. Ya-Sin merely took his talents to another house of worship and turned himself into a legit NFL prospect. He’s a physical, press man-style corner, with his upper body strength making up for his lack of twitchy suddenness. He lacks experience, and tends to open his hips too soon, leaving him vulnerable to receivers breaking off their routes into the flats and curls. But he’s got the physical tools and body type coaches want to work with and develop. He might fall as far as the 3rd round and if so, he’ll be a steal.
Compares to the other leading brand: Nate Hairston

Two Corners the Patriots Met With:

The Pats held a private workout with Johnson. One look as his measurables and you can see why they’d swipe right. Corners with his size/speed combination don’t come along every draft. Johnson is a Juco transfer who had to sit out a year to stay academically eligible. Whether that’s an inspirational story of determination and notgivinguponyourdreamism or just a sign he’s not good at learning is an eye of the beholder thing. And the reason you hold a private workout. By all accounts he’s raw and draws a lot of holding flags. But he came a long way last season, with improved route-recognition and learning to bait quarterbacks, as opposed to just re-routing receivers. And by midseason teams just stopped throwing his way. He’s a project who’ll need time to develop. But he’s a rare specimen who’ll probably come off the board on Friday.
Compares to the other leading brand: Tharold Simon

If Johnson’s measurables had them swiping right, Williams’ had them sending photos with Snapfiltered animal faces. They went to his Pro Day and a held a private workout. His obvious trait is his size, and yet he’s surprisingly nimble and smooth, with the ability to flip and get into his deep coverage. His 40-speed probably won’t have him keeping up with the elites, but he’s got the length, strength and aggressiveness to match up against this generation of giant receivers. Another project who’ll probably be drafted Friday night just for his unique attributes. If he comes to New England, I’m pronouncing Joejuan “Wun Wun.”
Compares to the other leading brand: Xavier Rhodes

Bunting’s best quality is versatility, with experience playing both sides of the formation, inside and out, press and off coverage, man and zone. He might have benefited from another year in college, but declared for the draft after his coach was fired. He’s aggressive with his jam in the first five yards, with the arm length to break up passes when he appears to be beaten. And the ball skills to keep opponents under 39 percent when targeted. He’ll probably last until Rounds 4 or 5, but could be a productive depth corner.
Compares to the other leading brand: Levi Wallace

Potential Round 1 Safety The Patriots Worked Out:

Abram is the best strong safety prospect in this class, a bruising, heat-seeking missile as an in-the-box run defender. He’s more of a hybrid linebacker than someone you’d have playing over the top of deep routes. Though he’s adequate in underneath coverage against tight ends and backs. He plays with a nasty streak a mile wide, which is great. But 5-11 maniacs at that position don’t have the best injury history, and it’s doubtful the Pats will be in the market for one as high as he’s projected.
Compares to the other leading brand: Keanu Neal

If you’re into identity politics – and let’s face it, these days who isn’t? – Rapp is half Chinese and has dual citizenship in the US and Canada. More to the point, he’s probably the best tackler at his position, with an aggressive edge to him and solid fundamentals for coming downhill and breaking down ballcarriers that got him 59 tackles, six for loss and five sacks. Teams will be turned off by his 40-time, but he plays faster than that and was often trusted on the back end as the post safety.
Compares to the other leading brand: Pat Chung

First things first. His mother might have gifted him with the name of a precious Peter Sellers character from an art house film sophisticated people like to pretend they’ve seen, but then Chauncey regifted it by adding the hyphenated name of the man who helped raise him in his junior year. Carrying all those extra letters on the back of his jersey didn’t hurt his game at all, as he recorded 71 tackles, nine for loss, three sacks, four picks and two PBUs. He’s shown the range to play single high safety, but a lot of pro personnel people project him as a slot player who’ll match up against tight ends. He’s certainly got all the traits of an every down NFL starter.
Compares to the other leading brand: Nate Allen

Best Playmaker Among the Safeties:

Thornhill’s numbers last year were linebackeresque, with 98 tackles, 4.5 for loss, six picks (which was third most in the FBS) and seven passes broken up. He’s also projected to move to corner, where he used to play full time. But he’s got the versatility and interchangeable traits that basically defy position labels. You could play him on the back end, at the slot in nickel or as a coverage linebacker in subpackages.
Compares to the other leading brand: Ha Ha Clinton Dix

The Perfect Patriots: At cornerback, it’s hard not to love Deandre Baker for a team that plays as much matchup zone and pattern read concepts as they do. Plus Georgia is obviously becoming their minor league system. But he’ll be off the board long before they’re in need of secondary help. At safety, Taylor Rapp seems like the perfect fit with his skills, demeanor and position versatility. Again though, it’s a question of how big a priority they’re willing to make a spot where they already run pretty deep.

Let’s get Arizona on the clock, five minutes ago. The 32nd pick can’t come soon enough.