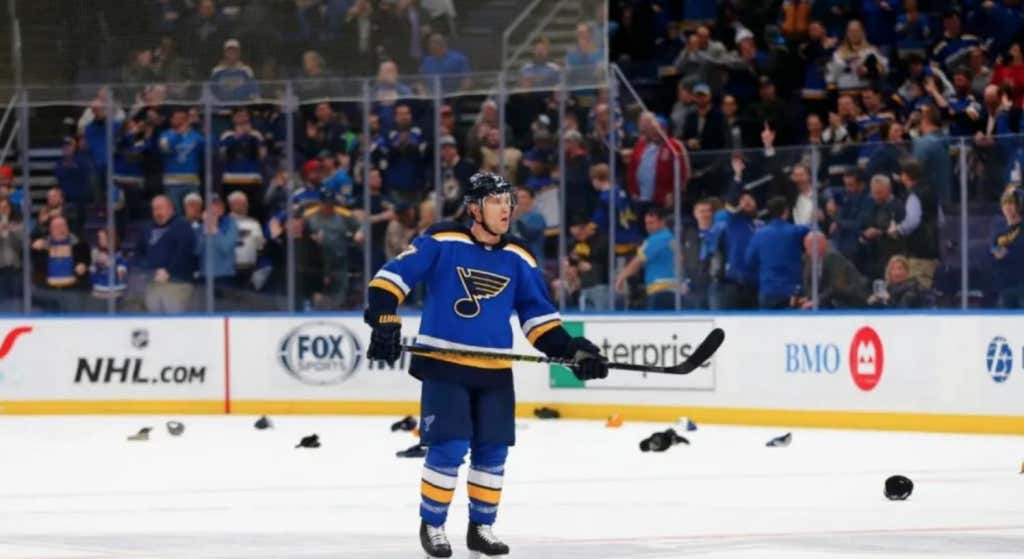 If you’ve been living under a rock for the past few days (or maybe don’t watch hockey) it might be news to you that the St. Louis Blues clinched a series victory against the Winnipeg Jets Saturday night in St. Louis. Not only did the get a victory, but Jaden Schwartz continued to be the same temperature as molten lava and scored the game’s first 3 goals by himself. I was saying hi to a friend who had unreal seats on the same end the goal happened, and after he cut across and buried and the hats immediately started FLYING down, it was nothing short of pandemonium.

LOOK AT THIS SCENE!

I’m dead serious, I still get chills down my back right now sitting in Manhattan hearing that crowd get excited when he cuts across and then erupt when the goal goes in. The goal is nasty, but the aftermath is the coolest thing in sports if you ask me. An entire building filled with 20,000 people sits and waits and continues going NUTS while a team of people skate around with XL trash cans and shovels to try and clean up the ice. Both the players and refs have to sit and watch for as long as it takes, all soaking in the fact that one dude is just dragging his nuts on the other team that night.

This specific Schwartz hat trick was more special of a moment given the fact that it was a playoff hat trick, in a clinching game, in the third period to go up 3-0 and give the crowd a pretty good indication that the Blues were going to move on to the next round. So goddamn cool.

There is something about the fact that a human being can do something that causes the entire arena to start raining solid objects that just makes it move for me. I can’t explain it, but its almost a primal feeling. Our entire society has decided that its so impressive to score 3 goals in a game, that we’ve all agreed to honor it by throwing our hats on the ice at the same time in tribute. Nowhere is it written or instructed as a rule, its just KNOWN.

Combine all of that with the fact that it is rare to even be at a game where someone pots 3, and it only makes the moment that much cooler. There were 1271 games last season and only 81 hat tricks. I haven’t taken a math class since high school, but according to my calculations, you have about a 6% chance of being at a game where someone scores a hat trick and that’s if you went to every single game.

One of my all time favorite hat tricks is Sidney Crosby scoring 3 against the Rangers on FREE HAT NIGHT. What are the odds?

Goddamn is playoff hockey the best thing in sports.