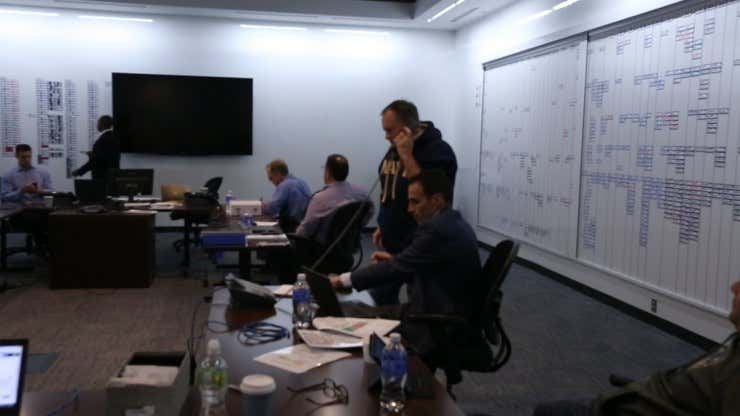 “Bill’s very cut-to-the-chase, as you can imagine. I’ve done three or four trades with Bill, and everything is just like, ‘Get to the point, let’s go. Are you in? Do you want to do this or not?’ He’s not going to sit around and wait. I actually loved that. He got right to the point.”

We are coming up on 48 hours before the NFL Draft, one of my favorite weekends of the year. As long as I live I will never forgive Ginger Satan for moving Round 1 from Saturday afternoon to Thursday night, thereby costing me and virtually every suburban husband a total blowoff day in the spring, but I digress. And one of my favorite parts of the weekend is trying to evaluate the dizzying moves Bill Belichick makes as he slides up and down the board.

Mark Dominik is no doubt right Belichick is the fastest dealer on the market. Sadly I’ve never gotten to actually see him in action. (Though based on my age, weight and conditioning I could probably qualify to ask Make-a-Wish to put me in the Pats War Room. Make a mental note for next year.) I’m sure on the phone he’s like one of Jordan Belfort’s sales crew selling Penny Stocks. But what Dominik didn’t mention is that no one does it more. And no one does it better.

At his best, Belichick is less like one of Belfort’s Telephone Terrorists and more like Dwight Schrute in “Garage Sale,” 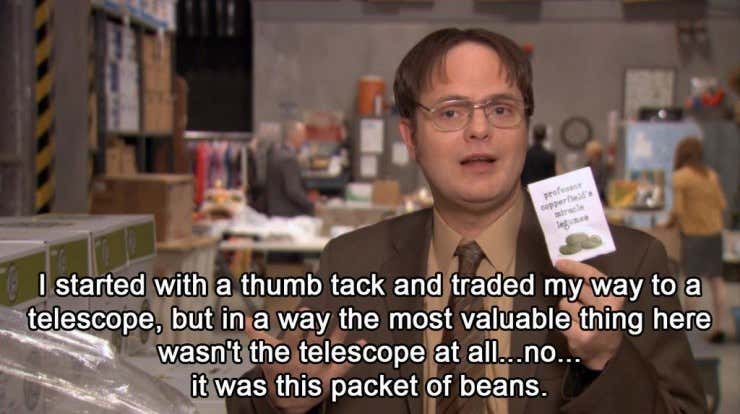 … trading a thumbtack for someone else’s semi-worthless stuff and working his way up until he has a $150 telescope. And yes, occasionally what he ends up with after using the draft pick is a useless packet of Professor Copperfield’s Miracle Legumes (I’m looking at you, Ras-I Dowling). But invariably he increases his assets as he goes.

It’s maddening to try to keep it all straight as he’ll move the same picks three and four times. And oftentimes it’s an exercise in delayed gratification as he’ll send picks this year for higher picks the following year. And so the whole history of where his picks came from and what they started out being is like tracing elements back to the Big Bang. But his very best, shrewdest draft trades stand out and should be remembered forever. And this year with him sitting on 12 overall picks and way less than 12 open roster spots, Bill’s Trading Post should be open and doing record business.

With that, here is one blogger’s list of the Top 10 Best Draft Day Deals of the Belichick Era:

The 49ers badly wanted tackle Joe Staley, who was a terrific pick up for them. But they finished 5-11, making that 2008 1st the 7th overall pick. They then used it to drop three slots while adding more picks before selecting future Pro Bowler Jerod Mayo. That 2008 3rd ended up being OLB Shawn Crable who could never stay healthy. But that 110th pick, in the 4th Round? They shipped that to Oakland. For Randy Moss. So essentially they used a late 1st to get the heart of their defense for 10 years and the most productive, game-changing wideout in team history. This one was actually almost better. The original deal with Oakland was a 6th Rounder for Moss, but Al Davis called Belichick back begging for mercy and he received it. Just so Belichick could continue to take advantage of the Raiders. Like they said in “Rounders,” you can shear a sheep many times, but you can only skin him once.

The Carolina Panthers had won 20 games over the two previous seasons and thought the guy who could get them over the top was receiver Armanti Edwards, who was objectively terrible  and finished with a career total of five receptions. And the Panthers instantly swam to the bottom of the league blowing bubbles behind them, finishing 2-14. So they had the top pick, making that 2011 2nd Rounder the 33rd overall. The fact it was squandered on Ras-IR Dowling, who couldn’t ever stay on field, should not take away from the fact they moved up 56 slots with one trade. I just wish they had traded No. 33 as well.

The Ravens wanted Kyle Boller, and the Patriots obliged. With that 41st, they moved up to get Eugene Wilson, a dependable, if unspectacular safety. That No. 1 pick the following year ended up being the 21st overall. And without having to move up or down the board at all, the Pats sat there and let Vince Wilfork considerable, 10-year, 2-time Super Bowl winning body fall into their lap.

This one is simplicity itself. Your classic Draft Day trade of packaging a late round pick to move up and get the player you’ve targeted. In this case, the Pats moved ahead of the Ravens, who were reportedly interested in the same player. Rob Gronkowski. Look up the career of Travis Goethel, whom the Raiders took with pick 190 and ask yourself if it was worth the price.

The Titans were all moist for Jared Cook, and in Belichick found a willing partner for their pick one round sooner, one draft later. And in thanks in part to Cook’s failure to ever throw a block, that pick ended up being the 47th. You might think moving up 42 slots would be satisfactory for anyone, but it wasn’t for this GM. The Pats moved that pick to Arizona for Nos. 58 and 89. No. 58 then went to Houston for 62 and 150, which were used on Brandon Spikes and  Zoltan “The Most Interesting Man Alive” Mesko. Leaving them with that 89th. Remember the No. 89 in 2010 I mentioned above? The one they turned into No. 33? This was it. So long answer … they moved up a total of like 98 spots with this one pick, plus added a run-force ILB and their long term punter. All for a late 3rd Round selection.

This was a shocker, not so much that they were willing to trade Bledsoe. As the NFL’s first $100 million player, and having found the Super Bowl winning franchise QB of their wettest dreams, everyone knew that there was no way they could keep him. In fact, the stunning thing was that they actually went through Day 1 without trading him. The Pats were holding out for a Round 1 pick, and trade partners who offered less because they thought they had the leverage were told to go piss up a rope. Finally Buffalo relented, albeit for a 1st the following year. The Pats ended up with the 14th overall, paired it with a 6th Rounder to move up one spot and take DE Ty Warren with the 13th. Bledsoe ended up playing 48 games for the Bills. Warren played 106 in New England.

Dillon was a devalued asset in Cincinnati, a malcontent who shot his way out of town and seemed like the total anti-Patriot. The Bengals got free safety Madieu Williams, who played for them for four season and went on to a 119-game, nine-year career. The Patriots got a franchise record 1,600-yard season and a Super Bowl. Both sides made out, but the Patriots got the better of the deal by far.

The 29th pick was traded to the Vikings, who took Cordarrelle Patterson. The Pats used the first three picks of their haul on Jamie Collins, Logan Ryan and Josh Boyce. They then took No. 229 and packaged it with Jeff Demps – who had just finished telling them he only wanted to play football part time so he could focus most of his time chasing Track & Field ribbons – to Tampa to land LeGarrette Blount. As the late, great Dan Jenkins once put it, the only thing more boring than Track is Field.

The Saints wanted Mark Ingram. The Pats were happy to slide back 28 slots and wait for Shane Vereen. They then took Stevan Ridley in the 3rd, who in his second season had over 1,200 rushing yards. Which is not only double Ingram’s production in the same season, it’s more than Ingram has ever had. That 2012 1st Rounder ended up being 21st overall, and they used it on Chandler Jones.

And, just to complete the thought, when they didn’t want to resign Jones, they traded him to Arizona for Jonathan Cooper, who didn’t work out, and a pick they turned into both Joe Thuney and Malcolm Mitchell. Who did. Thuney is a three-year starter who has yet to NOT end his season in the Super Bowl and without Mitchell’s six receptions on seven targets performance, they do not win Super Bowl LI.

Faced with having lost just their third starting left tackle since the late ’80s to free agency, the Pats made a move with San Francisco to pick up the biggest human being I’ve ever seen in person. He anchored the line as the starting left tackle on a Super Bowl team, playing every snap during the latter half of the season and through the postseason. For a fraction of what Nate Solder got paid from the Giants to put Eli Manning in harm’s way. All for sliding back 48 slots in the middle rounds of the draft. And with that 143rd pick, they picked up Ju’Whan Bentley, who was nothing less than their best rookie – and probably best linebacker – before he got hurt in Week 3.

I can’t wait to see who they draft, obviously. But I’m looking forward to the selections Belichick doesn’t make every bit as much. Let’s put Arizona on the clock and start the trading, NOW.