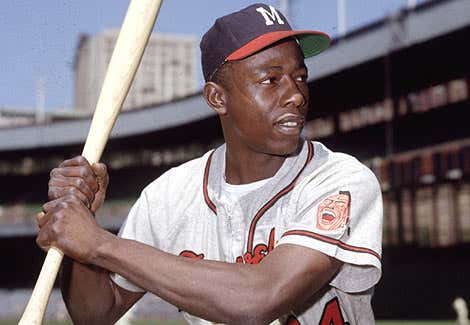 Hank Aaron of the Milwaukee Braves hits his first career home run, in a 7-5 win over the St. Louis Cardinals in 14 innings at Sportsmen’s Park. It was the seventh game for the Braves rookie, who would hit 13 in his first season in the majors. Two decades later, Aaron would become baseball’s all-time leading home run hitter, with 755 in a 23-year career.

Henry Louis Aaron was born on February 5, 1934, in Mobile, Alabama. As a youngster, Aaron fashioned his own baseballs and often used sticks to swing at bottle caps. In 1949, he got his first tryout with the Brooklyn Dodgers after drawing some attention for his power hitting with a local semipro team. Though he was not signed at the age of 15, his chance would come two years later when he got a chance to play for the Indianapolis Clowns of the Negro American League in 1951. After just three months with the Clowns, the following spring, Hank Aaron got offers from the Boston Braves and New York Giants.

Aaron would choose to play with the Braves because they offered more money and was assigned to play for the Eau Claire Bears in 1952, moving up to the Jacksonville Braves the following season. He experienced success in both seasons and had become one the team’s top prospects as he reported to spring training in 1954. That spring a chance to make the roster opened up when Bobby Thompson suffered a broken ankle. When the second began he went north with Braves, who were in their second season in Milwaukee.

Hank Aaron made his major league debut at the age of 20 on April 13th, going hitless in five at-bats as the Braves suffered a 9-8 loss to the Cincinnati Redlegs. Over his first ten days, Aaron had his struggles, batting just .217. However, he had his breakout game in St. Louis, going 3-for-7, this included the first home run of his career off Vic Raschi in the sixth inning of a 7-5 win that took 14 innings to decide. Hank Aaron would have a solid rookie season in 1954, finishing fourth in Rookie of the Year balloting, behind Wally Moon of the Cardinals, Ernie Banks of the Chicago Cubs and teammate Gene Conley. At the end of the year, Aaron was batting .280 with 13 home runs and 69 RBI.

In 1955, Hank Aaron became an All-Star for the first time, leading the league with 37 doubles while hitting 27 home runs and driving in 106 runs, with a .314 average. In 1956, Aaron won his first batting, title, batting .328, with 26 home runs and 92 RBI. A year later he had his only MVP season, leading the Braves to a World Championship while leading the league with 44 homers and 132 RBI. Over the next decade, Hank Aaron became one of the most consistent players in baseball. Though he never had 50 home runs in one season, he topped 30 in 12 of his next 14 seasons and moved up the all-time in a stealth fashion, as the Braves moved to Atlanta in 1966.

By 1973, fans could no longer ignore Hank Aaron, as he hit his 700th career home run, and went into the off-season with 713 career dingers, one behind the record of Babe Ruth, which was once considered unbreakable. Playing in Cincinnati to open the season on April 4th, Aaron equaled Ruth. Four days later on April 8th in the Braves home opener at Fulton County, a National Televised audience watched Henry Aaron hit #715 off Al Downing of the Los Angeles Dodgers, to become baseball’s Home Run King.

Hank Aaron’s career came full circle in 1975, as he was traded to the Milwaukee Brewers, to help extend his career as a Designated Hitter in the American League. Aaron would set one more record, becoming the all-time leader in RBI at 2,297.

Hank Aaron would retire after the 1976 season, with 755 career home runs. The record would stand until 2007 when it was topped by Barry Bonds. However, with Bonds’ link to steroids, many consider Hammerin’ Hank the true home run king as the San Francisco Giants star finished with 763 dingers.