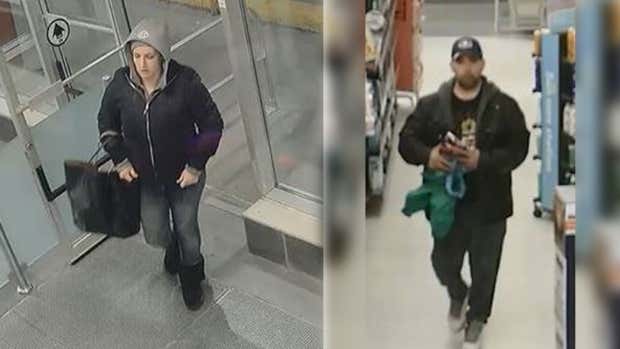 CTV News – Guelph Police are looking to speak to two people regarding a theft of $6,204.40 in toothbrushes.

The shoplifting incident occurred on March 25 at 10:30 p.m. The man and woman were seen leaving in a small, black, four-door vehicle. The make or model was not identified and the licence plate numbers were obtained. Anyone who recognizes the pair or has information about the incident is asked to contact police.

Before we even get started here, I have to put it out there that I believe this was an inside job set up by Big Dentistry. Think about it. Who in their right mind would ever steal a toothbrush? Only time I’ve ever heard of someone doing such a thing was when little Kevin McAllister freaked out at the general store and ran out of there with a TB in the original Home Alone. That was just one toothbrush, and it was already one more than anybody should ever steal in their life. You get that shit for free anytime you go to the dentist’s office. So my thinking here is that Big Dentistry plants these “thieves” to steal a shit ton of toothbrushes, that drums up some media attention, and then everyone starts talking about toothbrushes and buying toothbrushes. All of a sudden, Oral-B’s stock is going through the roof.

How else could you explain the fact that Bonnie & Clyde over here have managed to stay on the run for almost a whole damn month at this point after swiping all those toothbrushes?

I guess the only other reasonable explanation would be that even in Canada, the police have a lot more to worry about than to try to track down a couple of assholes who stole some Sonicares. It’s maybe the most pointless heist of all time. What are you even going to do with all of those toothbrushes? It’s not like there’s some high demand on the toothbrush black market. You think you’ll be able to just sell those off on your own? Or are you just stocking up for the next couple of centuries? Making sure that your children never have to buy their own toothbrushes and that their children after that never have to either. It’s just bizarre. I also have to imagine that if you’re somebody who needs to steal a tooth brush, you’re probably not brushing your teeth all that often in the first place. I don’t mean to judge or anything, but I just don’t picture criminals to practice the best dental hygiene. I could be wrong, but rarely have I ever seen a thief with a set of pearly whites.

I still think this was all Big Dentistry though. Don’t be surprised if Oral-B comes out with a new toothbrush at some point in the next month or so. Just seems a little too convenient for there to be no fuckery involved somehow.