Source – Badminton players may be at high risk for serious eye injuries, many of which can bring on permanent vision problems or blindness, according to a study of wounds treated at a Beijing hospital.

Whether inflicted by an errant shuttlecock or someone else’s racket … “More and more lay players in the badminton practice have been found injured . . . in recent years,” said senior study author Dr. Yi Liu of Capital Medical University in Beijing.

Eighty injuries were non-penetrating, but five were penetrating. … In addition, 36 cases led to secondary glaucoma, 23 had lens displacement and two extreme cases had retinal detachment. Surgery was required in nearly a third of cases, including the five penetrating injuries that led to irreversible vision impairment, with the worst resulting in blindness.

This is shocking news. I mean, we’ve always know that there are health risks involved in badminton, but only now are we finding out just how dangerous the sport truly is. How there is a direct correlation between badminton and crippling eye injuries that will have debilitating long term effects on the young athletes we send out onto that court.

Knowing what we know now, I would never sign my kids up for it. Frankly I think any parent that does is reckless and irresponsible. Just look at that data. The human body is simply not designed to take the punishment of the swinging racket and the speed of the shuttlecock, hit after hit after hit. And I think it’s time that we just ban the sport altogether at the youth level. Or at the very least let it only be played with soft, plush rackets and Nerf birdies. And we need a state level commission to oversee it at all levels in order to stop the carnage. We’re putting our kids needlessly at risk and it has to be stopped. At least until they reach high school. And why? Just to satisfy these parents who want to live vicariously through their kids? Because it toughens them up or something?

I say no. Enough is enough. Ban this dangerous sport and do it now. For the children. 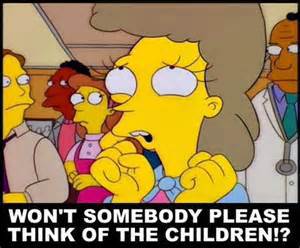