Considering there really wasn’t much of a competitive game to watch, the majority of the focus last night was placed on the Sixers’ bench. Especially so after somebody clearly sat on a duck and let out a stench so foul, it could wipe out an entire small nation. The only thing stinkier than Jared Dudley’s game last night was whoever’s ass this fart came out of.

Unfortunately, it would appear that many people have already unfairly placed the blame on Joel Embiid’s booty. Even some of my colleagues have put the guilt on that man’s tush without any physical evidence there to support their claim. But this is America, folks. And in America, you are presumed innocent until proven guilty. Which is why a full-fledged investigation is in order here to figure out exactly who dealt it.

So let’s set the scene real quick. We have 4 members of the Philadelphia Sixers (men’s professional basketball team) who were trapped directly at the Spray Zone. 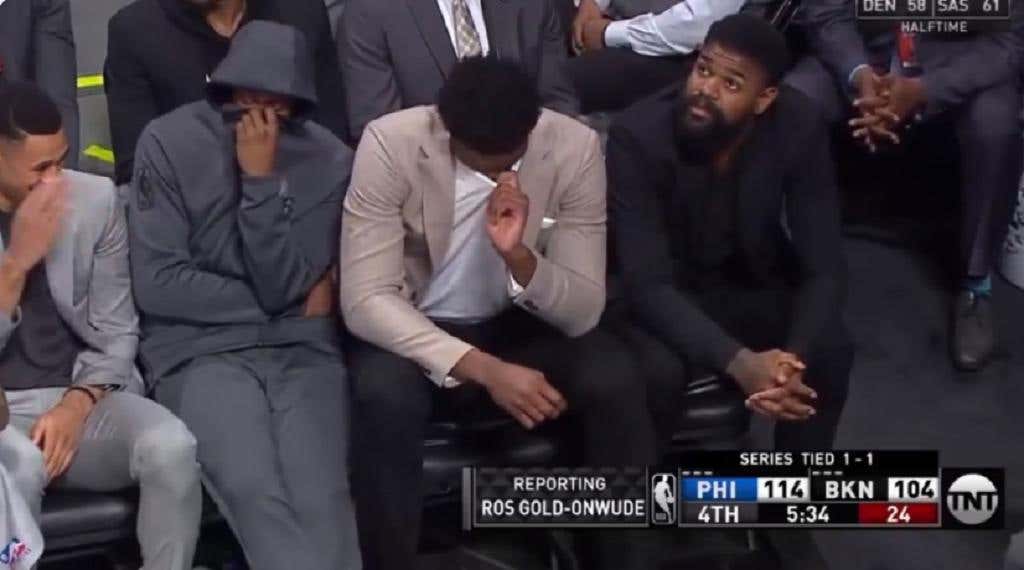 From left to right we have Zhaire Smith. Next up is, I believe, Jonathan Simmons. Then we have Joel Embiid and finally we have Amir Johnson at the end. Now let’s guy by one-by-one here to figure out who is guilty.

Now if you are going by the “Whoever Smelt It, Dealt It” code, it would appear that Zhaire Smith is guilty as all heck here.

Which would make sense considering Zhaire is a rookie. He probably doesn’t want to be known as the guy who rips copious amounts of ass on the bench during the playoffs. That’s something that can stick with you for your entire career. So Zhaire is doing everything possible right now to play it off as if this fart did not leave his booty hole. It’s an overly aggressive hand fan which is almost to say, “hey, guys, look at how much it wasn’t me”. We’re going to keep him locked in as a prime suspect here.

Now moving over to Jonathan Simmons. This seems pretty open and shut that he is not the culprit. This reaction here is clearly not his own brand.

Hoodie over the nose is a clear indicator that he is innocent. It shows that he is in need of smelling himself to get that putrid fart out of his nose. No guilt here.

But here is where things get interesting. Because I think the majority of the people out there are split on whether it was Joel Embiid or Amir Johnson. But I think that both of their innocence are tied together.

For Amir Johnson, most people are pointing out the fact that he’s just so calm, cool and collected about the entire ordeal. Almost as if he is so used to his own farts that this nasty one didn’t even phase him.

And that rationale makes plenty of sense. Play it cool and act like you don’t even smell a fart. Couldn’t possibly be you if you don’t even smell it, right? Is Amir Johnson actually just one of the best actors of our generation? It’s certainly plausible. But then how would you explain the fact that Zhaire Smith, who is sitting 3 seats down from Amir, smells this fart so much sooner and so much stronger than Joel Embiid who is sitting directly next to Amir?

It’s not like Amir Johnson farted off of a ramp that jumped right over Embiid and landed directly on Zhaire. That just wouldn’t make any sense. And it goes the other way, as well. How would Zhaire Smith be that theatrical about smelling a fart from Joel Embiid from 2 seats down, if just to his left Amir Johnson doesn’t appear to smell anything. They are indoors. It’s not like Zhaire Smith was down wind or anything and Amir Johnson was behind the line of fire. They are indoors. The first two who would have smelt Embiid’s ass would have been Amir Johnson and Jonathan Simmons. Then it would continue spreading from there. But it doesn’t appear to be that way. Which is why I truly believe that Joel Embiid was almost just acting as if he smelled the fart to make sure that people didn’t just assume it was him for not reacting at all.

Ladies and gentlemen of the jury, do I need to go any further? That right there is all the hard evidence we need. That right there, my friends, is about as clear of a crop dust as I have ever seen. It wasn’t Embiid. It wasn’t Amir Johnson. It was James Ennis III, of all people, who sat on a duck and then high tailed it straight out of there. I rest my case.