Look at the Arizona Cardinals continue to stir the pot straight Littlefinger style. While other teams were putting together INCREDIBLE must watch schedule release videos to make NFL Schedule Release Day actually cool for once, the Cardinals were either trolling the entire world or trying to get more value for the number 1 pick by excluding their current young QB of the future. Actually Rosen is in the video but you will miss him if you blink or don’t have the keen eyesight of Stoolies that play Photo Hunt whenever a Barstool blogger tweets a picture from their home. 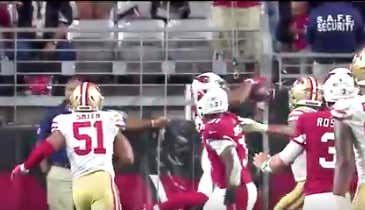 It’s not like the Cardinals are the Rams and have stars all over their roster. Off the top of my head, I can name three Cardinals stars: Larry Fitzgerald, David Johnson, and Patrick Peterson. Larry Fitz has been one of the most beloved NFL players forever, David Johnson turned in one of the greatest fantasy seasons ever a couple of years ago, and Patrick Peterson is a stud. But other than those three, you would think the Cardinals would focus on the guy currently manning the most important position in sports for them. And I don’t want to hear that Josh Rosen doesn’t have any highlights from last season. Trust me, he does. You know how I know this despite watching about 3 seconds of the Cardinals play last year? Because every time Rosen completed even a marginally decent pass, a billion Giants fans and media members that have made clowning the Giants their number 1 priority angrily tweeted out a video of it with their cum soaked hands. If the Cardinals social media team kept Rosen out of that video, it was because they are hoping some GM that fell in love with Kyler Murray will move up to the number 1 pick, not because they have already moved on from Rosen.

Or they are picking Murray number 1 and don’t give a shit about any smokescreens. I don’t fucking know. I hate the week leading to the NFL Draft, especially since my team’s GM is either trolling the fuck out of the fans or sincerely thinks Eli Manning may be the answer for another 3 years.

UPDATE: They just released a new video with Rosen in it.