From the Washington Examiner:

Democratic 2020 presidential candidate Pete Buttigieg was heckled for the second day in a row on Wednesday by anti-gay protesters during his two-day swing through Iowa.

Randall Terry, donning a Satan costume, was joined by two other demonstrators dressed as Jesus and the mayor of South Bend, Ind., as they hurled insults at the openly gay and married White House hopeful. They used a speaker system set up outside the house in Marshalltown, Iowa, where Buttigieg, 37, was expected to meet with supporters in the early nominating state.

Here’s the transcript that surpasses levels of cringe from that of even the smallest community theater script workshops:

“We got signs all over Hell! Beat your Savior! Beat Him! I hate this guy! Yes! More blood, Peter! Every vote is a lash on the back of Christ!”

“Abortion is above my pay grade!”

Homophobic-Satan-with-multiple-chins: ::evil laugh, as Satan is known to do::

“Your pay grade is gonna be great! We have a place for you Peter, you have no idea how important you are to us! Yes, yes, YES!”

According to Satan’s Wikipedia:

Randall Allen Terry (born 1959) is an American pro-life activist, politician and comedian. Terry founded the pro-life organization Operation Rescue. The group became particularly prominent beginning in 1987 for blockading the entrances to abortion clinics; Terry led the group until 1991. He has been arrested more than 40 times, most recently for violating a no-trespass order from the University of Notre Dame in order to protest a visit by President Barack Obama.

First of all, who wrote that & allowed ‘comedian’ in there? 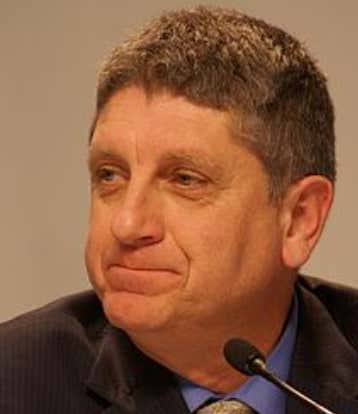 Second, going off the photo above alone, odds are good that much like the gay men he hates, Terry has never given a woman a real orgasm. Unfortunately that hasn’t stopped him from being a religious hardo-o with a passion for weirding out large groups of humans from all ends of the cultural/lifestyle spectrum.

On the plus side for Buttigieg, this strange, gross display brought more attention to his small campaign rally & he handled it in stride.