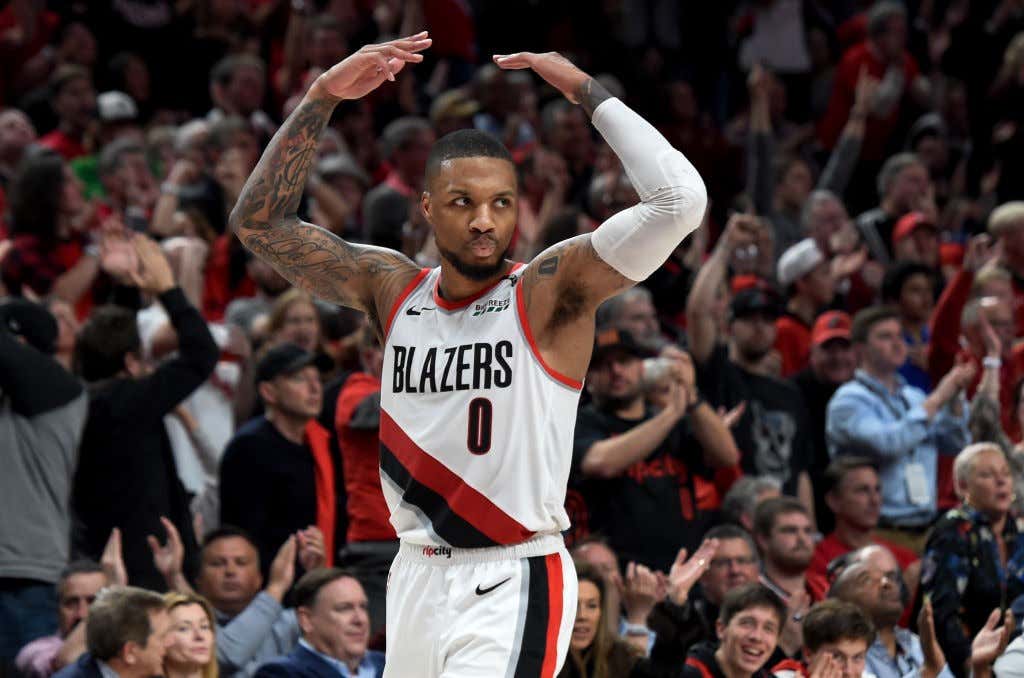 Good morning everybody happy Wednesday and welcome back to another edition of Last Night In The NBA where we bring you up to speed on everything that went down from the night before in the Association. So far this playoffs, Game 2s have been about restoring order. We saw PHI avenge their Game 1 loss, same with the Clippers, and Tuesday was more of the same. A number of teams were facing must win games and while some were easier than others, it was definitely another drama filled night of playoff basketball. We saw a couple seasons be saved last night through big time individual performances, and just like we all hoped this playoffs is certainly living up to the hype. If you missed any of the action last night that’s OK, here’s what happened.

You knew the Magic were in trouble once you saw the Raptors jump out to an 11-0 lead and never look back. I fully understand if as a Raptors fan you were a little nervous heading into this game given how Game 1 went and the Raptors playoff history, but last night was a nice reminder that ya know what? This team is actually pretty good. Sure they blew homecourt for the time being, but they still have Kawhi Leonard and last time I checked he’s still fairly unstoppable

You knew Kawhi was going to how up and do everything in his power to will his team to victory and save the season, but for me the story here was the bounce back effort of Kyle Lowry

That was certainly a better performance than the goose egg he threw up in Game 1, and it’s not exactly a reach to say if the Raptors get this version of Lowry or something close to it, they’ll be fine this series. The encouraging part about this Raptors wins is they didn’t shoot all that well from three, didn’t really get to the line, but only had 7 TOs and were never really threatened, Every time the Magic got it somewhat close the Raptors had an answer and they did it without really getting much from their second unit which is usually a big part of their recipe for success. It was mostly their two stars and the MIP in my opinion Pascal Siakam that carried most of the load

Seeing their defense get back to the level we all expected was huge for them, and they’ll have to continue that on the road if they want to steal back homecourt. I’m guessing they will.

For ORL, while you’re bummed because you had momentum after Game 1, it’s mostly whatever. You got the split you needed and there’s nothing you can really do when you go into that building and shoot 37/26% with 17 TOs. Outside of Aaron Gordon nobody could buy a basket, their starting backcourt combined to go 5-18, and unfortunately this thing was a wrap fairly early.

I don’t know how they’re going to win both in ORL, but I think even getting this series to go 6 would be a win for ORL considering everyone thought they’d get swept when this series started. You hope they shoot better in their own building, and maybe next time don’t get down 11-0 before you even know what’s going on. That advice you can have for free.

In my opinion, the best game of the night. It wasn’t always that way, given the fact the Spurs came out and had two separate 19 point leads, but anytime we can witness an epic collapse in the playoffs I am very much here for it. Two nights ago it was GS, well last night it was the Spurs. They had a prime opportunity to basically end the series by stealing both games in DEN, their stars did their part and scored over half their points

but offensively it was a tale of two halfs. Just 46 points over the final 24 minutes, they outside shooting certainly did them in coming in at 5-18, and getting absolute jack from their second unit ultimately did them in. For a majority of the night the Spurs did a great job of answering every Nuggets run, multiple times they cut it to 6 and the Spurs came down and immediately answered, guys like Derrick White had a lot to do with that

but once things started to unravel for them they couldn’t stop the bleeding, DEN started to get momentum and the next thing they knew their 19 point lead was blown. Sure they still got the split which is what matters most, but this was for sure a big time blown opportunity for a team that doesn’t really collapse like that all that often.

For DEN, they saved their season, no two ways about it. More accurately, Jamal Murray saved their season with a gigantic fourth quarter. Guy was horrendous for 75% of that game but then something clicked and he became unstoppable. You hear players talk about being in the zone, well that’s what it looks like in my opinion

What makes the Nuggets so dangerous is their ability to explode offensively, it’s something they did all year especially in that building and Game 2 was a perfect example of what this team can look like when offensively they are clicking on all cylinders

It was a big time move from Mike Malone to stick with Murray through all his struggles since he was doing more harm than good, but that’s just a coach that trusts his players will figure things out. The Nuggets spent 90% of this series missing pretty much every open three they took, and that’s a large reason why the Spurs were looking like a team ready to pull the upset. If they get back to making their shots at even a respectable level, they have too much firepower in my opinion. The challenge now becomes can they beat a team that’s 32-9 at home, who will most likely actually get production from their role players in their own building. The Nuggets steal one, I think this series might be over.

I’ll say this, Damian Lillard is one bad ass motherfucker. That dude is one of the most unstoppable guards in the league and I’m not really sure at this point it’s even remotely debatable. Matched up with Westbrook who is no slouch either, he’s completely dominated that matchup this series and last night was no different. If you watch a lot of POR basketball you know there are nights where their backcourt becomes unstoppable and carries them over whoever stands in their way, and that’s what happened in Game 2. The Dame/CJ pairing had 62 of the 114 and OKC had no answer whatsoever to slowing them down. Trapping, doubling, it didn’t matter. These two got wherever they wanted and were efficient, which is usually a deadly combination

After getting swept last year, being up 2-0 has to be huge for the psyche of this team and their fanbase. A lot of people had OKC as one of the teams that may be able to take down GS, well they may not even get out of the first round. They say a series doesn’t start until someone loses at home so we still have a long way to go, but there’s no denying the Blazers look a billion times better this postseason compared to last.

For OKC, did you know they are 3-13 over their last 16 playoff games? All that talent and they don’t exactly have the results you would expect. Paul George said he was 100% healthy and his play in my opinion showed that to be true

and then Steven Adams did his thing with 16/9 on 7-8 shooting, but it was a tough night for Westbrook who finished just 5-20, and then the bench wasn’t all that better. Chalk this one up to poor shooting, I mean 40/17% splits is just pathetic and the lack of outside shooting is really looking like it’s going to be the death of this team for yet another season. Jerami Grant is really killing the Thunder as they tend to need his secondary scoring and he went a brutal 1-7 (0-5). You normally can bank on him making a couple threes, but he’s mostly been a non factor this series.

This was a tie game at the break so to lose by 20 is pretty brutal, and for a team that prides itself on elite defense, you really couldn’t find it in the second half. They had no answer in that third quarter when POR started to pull away, and if they are going to shoot like dick and defend like what we saw, this is going to be a quick series.

And that’s it! You’re now all caught up on everything that went down last night in the NBA. We’re back tonight with three more Game 2s, and I have a feeling they’re going to be just as drama filled as what we got over the last two days. Have a great Wednesday!