I love when these old scouting reports pop up on players.  A few weeks back a White Sox scout’s scouting report on Bryce Harper leaked and it was a complete dud.  This one?  Well it basically says Timmy Anderson is going to be a perennial all star with 55+ grades across the board.

Here’s a (hopefully) enhanced version of it so you can take a look for yourself: 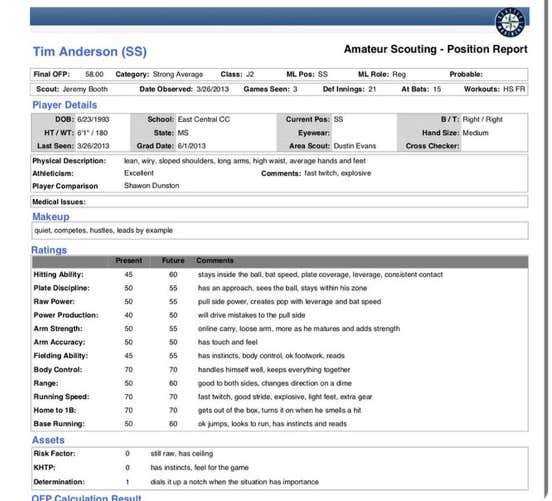 and the scouting report even attempts to predict his intangible tools; shit like base running and determination.  I don’t know this scout is, but he nailed it.  It took a few years, but it Tim Anderson was hardly a finished product when he was drafted.  He was also a high ceiling, low floor pick.  But goddamn! has he turned into just a fucking awesome player to watch.

He has hit everything in sight.  Literally everything.  He leads all of baseball in batting average, is 9th in OBP, 5th in wRC+, 6th in hits, 4th in stolen bases, all while playing premier defense… But my favorite part about him is that he has turned into the face of the Chicago White Sox.  And I mean that truly; he’s the emotional leader on and off the field.

He’s become a great quote in doing so.  Now don’t forget, these are all paraphrased

[In reference to the White Sox chase for Machado]

Manny Machado coming to the South Side?  Fuck that, he’s gonna have to earn SS.  That position is MINE.  We’re looking to win now.  You either ride with us or you get run over

Anyways I couldn’t be happier with our SS situation moving forward.  Tim Anderson has worked his ass off to evolve from an athlete masquerading as baseball player, and at this point he’s healthily in the Tier II of starting short stops, if tier I is reserved for players like Corey Seager or Franky Lindor.  He’s become such a good ball player and it’s a true joy watching him every day