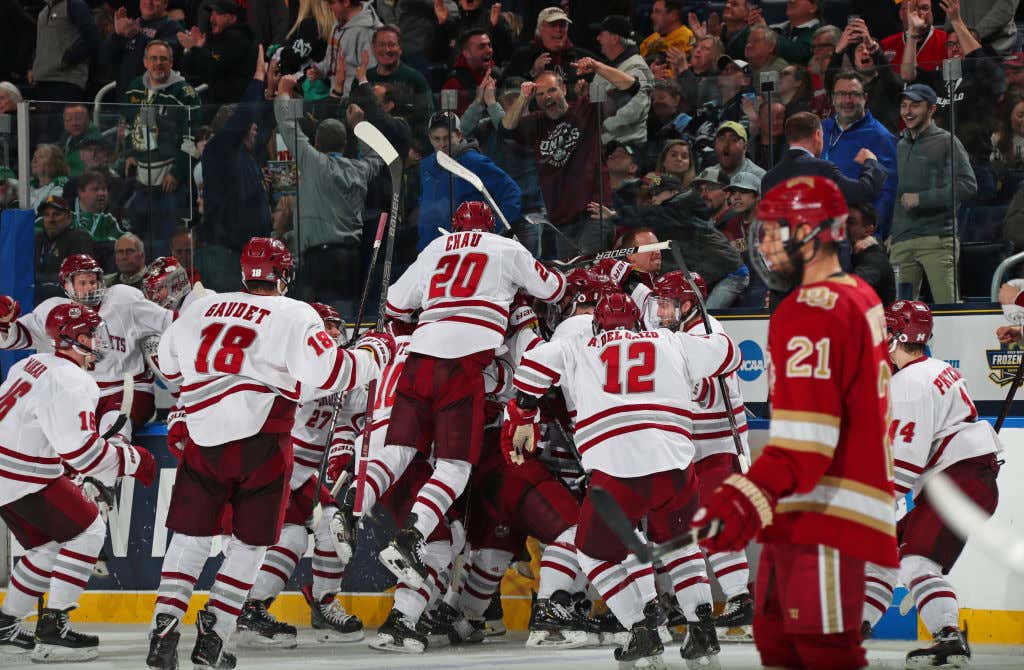 UMass is headed to the national championship for the first time in school history after a 4-3 overtime win against The University of Denver. The Minutemen will face off against the reigning national champs, Minnesota-Duluth on Saturday for the National Championship.

A crazy game from start to finish that saw three ejections, a two goal lead blown in the 3rd period and an overtime winner. It was defenseman Mark Del Gaizo who called game for the Minuteman in overtime. The New Jersey native is also a freshman, so it’s safe to say the next few years at the Zoo will be pretty fun for this kid being that he scored the biggest goal in the program’s history.

Duluth will be the toughest matchup of the year for Greg Carvel and his boys. The NCHC is a different breed of hockey and UMass saw that on Thursday night. Sophomore defensemen Scott Perunovich and Mikey Anderson hold down the back end for the Bulldogs and are as solid as they come. There is no question in my mind Perunovich will get regular minutes in the NHL, Anderson as well. UMD has depth, experience, skill and a ring on their finger, so it’s going to be an absolute battle on Saturday night.

Also – shout out to UMass. I made a bet with Rudy from Stool Scenes that if UMass lost I would have to get frosted tips and wear a puka shell necklace for two weeks. I don’t know if I could of handled that. The puka shell necklace I may be able to get used to. But no chance I could be walking around looking like a member of NSYNC…no chance.