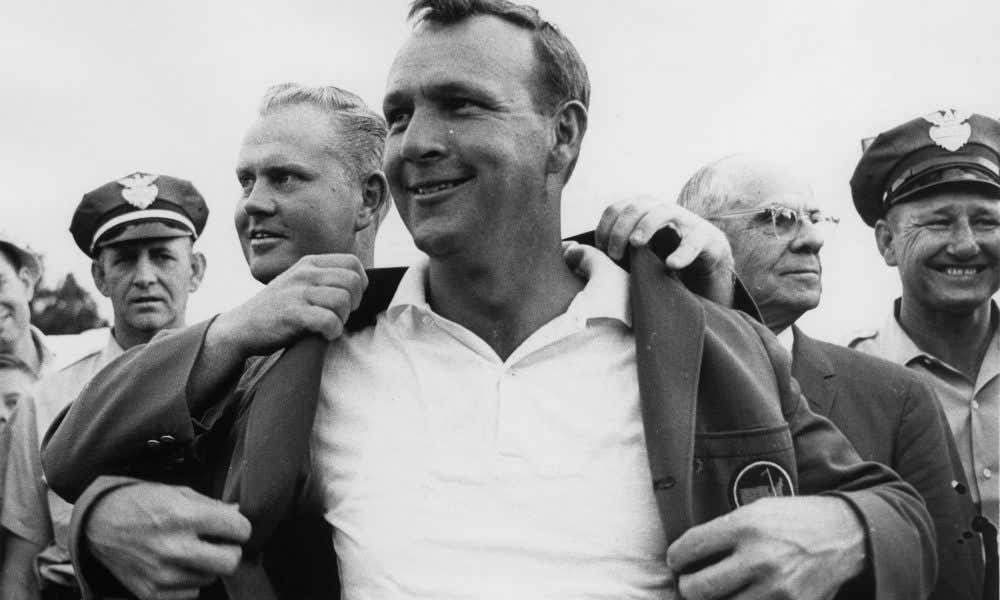 Arnaldo Palmer becomes the first to win four green jackets, beating out Dave Marr and defending champion Jack Nicklaus by six strokes, with a 12-under-par, 276. It is the third time in five years that Palmer, arguably the most popular player on the tour wins the Masters, bringing his total major titles to seven, which ranked third most at the time. It would be the final major title of his career.

Arnold Palmer was born September 10, 1929, in Latrobe, Pennsylvania. Palmer learned golf from his father, who worked as a green’s keeper at a local country club. The club would allow the young Palmer to follow his father at work, which allowed him to hone his skills at an early age. Attending Wake Forest on a golf scholarship, Arnold Palmer’s career was briefly interrupted when he served in the United States Coast Guard.

Turning professional in 1955, Arnold Palmer’s first tour victory came in the Canadian Open. His blue-collar background and personality quickly made Palmer one of the most popular players on the tour. In 1958, Arnold Palmer won his first major title, taking the Green Jacket at the Masters. Two years later he won the Masters again and added the U.S. Open beating out Amateur Jack Nicklaus, with a thrilling final round 65 at the Cherry Hills Country Club in Colorado. With large galleries that followed him on the course called “Arnie’s Army”, Palmer dominated the early part of the 1960s winning back-to-back British Opens in 1961 and 1962 as well as a third Masters in 1962. That Master title tied Palmer with Sam Snead and Jimmy Demaret for most Green Jackets at three.

Arnold Palmer started the 1964 Masters at Augusta National with a nice 69, to find himself in a five-way tie at three under par, along with Bob Goalby, Davis Love Jr, and Gary Player, Round 2 saw most golfers struggle with the course, not Arnold Palmer who shot a 68, and held a four-shot lead over Player at -7. The Third Round of any golf tournament is known as moving day, but Arnold Palmer remains steady atop the leaderboard with another 69, to reach ten-under-par. Behind Palmer, it was Bruce Devlin shooting a 67 to sit in second place at -5. Dave Marr meanwhile was third at -4, Gary Player with a second straight 72 was stuck at -3, in a three-way tie with Peter Butler and Jim Ferrier.

Holding a five-stroke lead, gave Arnold Palmer room for error heading into Sunday at Augusta. Bruce Devlin who was in second, struggled in the fourth round, shooting a 73 and lost a stroke to finish in fourth at -4. Jack Nicklaus, the 1963 Masters Champion had a big day, shooting a five-under-par 67. However, after struggling in the early rounds, it only left him at -6, tied with Dave Marr who with a 70 also ended the tournament at six under. Arnold Palmer meanwhile was cool and steady as he had two birdies and a bogey on the front nine and did the same on the back nine to card a 70 for the day and a 276 for the tournament to win easily at -12.

Arnold Palmer was the first golfer to win four green jackets as he won his seventh career major title. At the time only Walter Hagin with 11 and Ben Hogan with nine had more major championships. It would be the final major of Palmer’s career. Jack Nicklaus would eventually top Palmer’s record of four wins at Augusta taking home six green jackets. The only other golfer to win the Masters four times would be Tiger Woods.