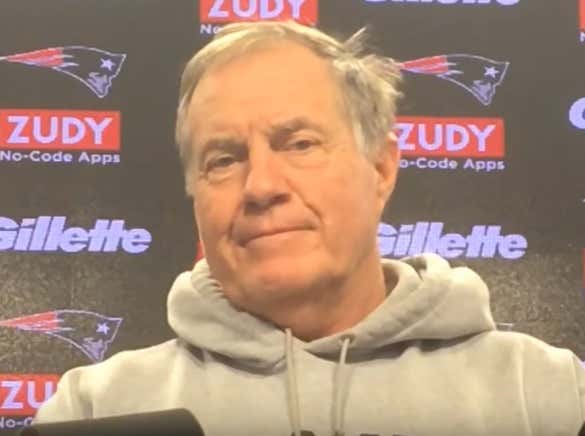 Granted the coach treats this event every year like I treat putting on a suit to go spend Easter with my in-laws. And without me there, the questions were lacking. And he was no doubt disappointed since he and I have that unmistakable soulmate connection that comes out any time I raise my hand and he calls on me. But even with me answering the call of duty, Belichick nevertheless brought enough to the podium for me to sift through like a prospector. And here are some of the biggest gold nuggets I’ve found:

Preparing a draft board is an insane amount of work.

Nick [Caserio] does a tremendous job. He sees literally every player, all of the pro players, all of the college players as well as being in all of the staff meetings and being a part of all of the things we do from a coaching standpoint. … I thought Dave Ziegler and his staff did a great job in free agency of, again, organizing all of that. They continued because of, again, the compression of the pro days, the college pro days, which has been going on but now this year it’s really got compressed into pretty much a two week period, so we had to rely on those guys to supplement our pro day activity as well in the spring. … . Monti [Ossenfort] and his staff, who have been working on the draft since the day after the 2018 Draft … compiled an enormous amount of information both from a football standpoint, character, medical and so forth on several thousand players, which gets whittled down to let’s call it 100 or so in the final analysis, but you don’t know what that number’s going to be until you go through the entire process and it’s a very lengthy and tedious one that Monti and his staff have.

Holy moly. I’m tempted to compare the job these personnel departments do to the Apollo Missions, but there were only a handful of those. This is more like the Golden Gate Bridge. Where they not only had to plan, design and then construct the thing, the job of painting it never ends. As so as they get to one side, they have to go back to the beginning and paint it again. But even the painters know exactly that paint they use. Caserio, Ziegler, Ossenfort and their staff have to evaluate 1,000 prospects not only for whether they can play football, but if they’re healthy enough, too dickish to coach, whether they’ll fit the system and a million other factors. That’s a billion factors altogether. Bear that in mind the next time some 6th rounder gets waived.

[M]many of our 2018 draft choices had partial seasons or minimal in some cases. We’re excited to see how those guys will do this year, obviously. It’s a hardworking group. Those guys are here on a very consistent basis and hopefully we’ll be able to get a much longer look at the 2018 draft class than we were able to get last year. Moving ahead to 2019, we have a lot of draft picks as we sit here today. I don’t know that that necessarily means that they will or won’t be there on draft weekend.

Simply put, he’s got an entire rookie class from last year that, due to injuries, contributed only Sony Michel to the Super Bowl champions. They’re all coming back as redshirt freshmen. Plus he’s sitting on 12 picks this year. And 12 rookies are not going to make this roster. Personally, I suspect we’ll see some of those deals where he flips a 3rd rounder for a bad team’s 2020 2nd rounder. Like he did in 2010 when he flipped the 89th overall to Carolina for their 2011 2nd rounder. And the Panthers ended up being the worst team in football, giving him the 33rd overall pick. Thus, he moved up 56 slots by giving up what amounted to the immortal Armanti Edwards. But for sure he’ll move picks for veterans because …

We have the different values that we place on future picks, current picks, the round values. … Veteran players, depending on their age, contract situation and level of play – again, we have comparables that we would look at on that, so a starter, rotational player, a backup, a player that has a certain amount of playtime or a player that has a certain amount of production, that there are comparables of those trades, whether it be player-for-player trades or player-for-pick trades. And again, certainly there are trades that fall outside of whatever the norm is, but we have norms that we look at it and that’s the norm. And you can do better than that, or you probably feel like that’s maybe about as good as you can do, assuming there isn’t an unusual situation – whether it’s a high demand for the player and it’s below that – then you decide whether or not you want to accept maybe a little less than market value for the trade, but you still feel like the trade benefits your team, so you decide to do it.

As we sit here two weeks before the draft, the roster has hole so massive NASA is still trying to capture their image. Just like it did last year, when the team was missing a left tackle. So during the draft they slid back back 48 slots – from 95 to 143 – in a trade with San Francisco in exchange for Trent Brown. Most famously, in 2006 their top receiver was Jabar Gaffney, so on Draft Day 2007 they picked up a 4th rounder from the Niners and sent it to Oakland for Randy Moss, and sent their 2nd and 7th to Miami for Wes Welker. Again, 12 picks will not make this roster, but some of them most definitely bring some veterans who will.

A proven veteran is a much safer bet, especially at receiver.

People who like to ask why the Pats can’t draft wideouts are asking the wrong question. It’s not why can’t they, it’s why don’t they. And here’s your answer. As I’ve said before, the bust rate on wideouts is off the chart. And the earlier you draft one, the greater the risk. Ask Matt Millen, who went through a poker hand full of Top 10 picks before he pulled Calvin Johnson out of the deck. And in doing so made history. By building the first 0-16 team. The more the college game goes to the Spread, the harder it is to project a college receiver’s success in a pro offense. Which is why they’ve only drafted 16 WR’s in 19 drafts, and half of those were in Round 5 or later. So keep whining about Chad Jackson or insisting they use No. 32 on a stud “weapon” for Brady. I’ll just keep talking about how they produced Julian Edelman and David Givens and wait for them to trade for the next Welker.

Belichick strives to stay ahead of the NFL’s evolutionary curve.

I’d say that, look, we have our standards at each position, so height, weight, speed and other criteria are a standard. So, some players are below that standard and are good football players, some players are below that standard and aren’t good players. Some players are above that standard and are good, and some players are above it and they’re not as good. So, that’s not the final evaluation, but it is a standard. So, as those standards have changed – I mean, when I came into the league when I was at the Giants, the standard for defensive tackle was probably 6-2, 285 pounds. I mean, offensive linemen – 6-5, 285, 290. I mean, those guys now would look like the midgets. … [I]f two-thirds of the league have running-type quarterbacks and quarterbacks that are athletic and are going to scramble and are going to be those kind of players, then you better be ready to defend them. And if teams are going to be three-receiver sets in the majority of offensive formations, then you better be ready to put five defensive backs on the field and be ready to have a slot corner. If you want to have a slot receiver, then you need to have a slot receiver if you want to put three out there. Somebody’s got to play in the middle. …

Usually you sit there at the end of the year and say, well, we had a lot of trouble blocking this player or defending this type of player or whatever it is, and then that kind of becomes a need for you. Either we have to change our scheme to do this, which probably isn’t that easy or you would have already done it, or we have to have another certain type of player on our roster that we don’t currently have that has a certain type of skillset. So, this is another year where there’s a lot of big receivers – 6-4, 225, 230, whatever they are – I mean, somebody’s going to have to cover those guys one of these days. I don’t know if it’s all going to be this year or not, and there’s plenty of them in the league right now that fall into that category, so it seems like there’s a little bit more of an emphasis towards the smaller, quicker slot receivers. So, better find somebody to cover those guys, too, and vice versa.

This is my favorite part of these comments. How the Pats try to be proactive instead of just reactive. To anticipate what the next huge trend is and be ready for it. Think how when WWI broke out, they were still trying to fight on horseback, but the machine gun made calvary obsolete. So they went to Trench Warfare, which produced a stalemate until someone invented the tank. Churchill was delighted by Pearl Harbor. Not just because it got a very pissed off United States off the bench and into the war, but because only our old, obsolete battleships were sunk. Our aircraft carriers were out at sea and that was the future of naval warfare. And still is, until someone invents the tankcraft carrier or whatever.

I’ve always believed that Belchick’s greatest miscalculation was how, after Bill Polian got the pass coverage rules changed in 2003, he gambled that the next generation of NFL cornerbacks would be small, super agile speed burners who could flip their hips, change directions on a dime and mirror receivers. So we ended up with the lost years of 5-9 and 5-10 disappointments like Ellis Hobbs, James Sanders, Jonathan Wilhite, Terrance Wheatley and Darius Butler. When the league in fact was trending toward big, physical corners like Richard Sherman and Darrelle Revis (who wasn’t huge, but always punched above his weight). It’s why defensively you see them now relying on fast, mid-sized defenders like Kyle Van Noy and Pat Chung to contain mobile quarterbacks,and pick corners like Stephon Gilmore to cover the big receivers he mentioned. Why offensively we’ve watched them pivot to more of a power run game as defenses like their own go small. I’ve heard Nick Saban say that someday, as defenses downsize and emphasize speed, someone’s going to come along and bring back the Wishbone and no team will have the personnel to stop them. It’s all about reading the trends and being ready to jump out ahead of them.

Belichick is still not putting up with Ben Volin’s bullshit.

I’ll entertain anything relative to the 2019 Draft.

Volin: Do you have any plans on how you’re going to replace the defensive coordinator moving forward?

Yeah, we’ll just kind of stick to the draft for right now, Ben. But I appreciate the question. I really appreciate you asking that.

Gold. This is the best time of the sports calendar and I won’t wish it away but the draft can’t get here fast enough.