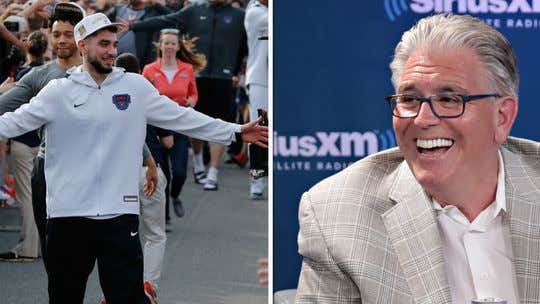 Francesa says Tony Bennett would never win a title at Virginia. He doubted their offense and said they would not get it done in the big spot

Ty Jerome sent Cold Takes Exposed the clip, and busted Mike’s balls. Virginia hesitated to do any interviews with Mike at all at first, and Mike was on the defensive:

Eventually Ty Jerome agreed to go on with Mike, where he snuck shots in the entire interview:

Now I dunno what to think. Ty Jerome is from New Rochelle. One town over from where I grew up. White boys from the 914 stick together. So I was happy for him when he won his title. And I’ll be honest he hits Mike with a few shots that are undeniably good.

But on the flip side, I’ve sworn allegiance to House Francesa. I’ve bent the knee for Numbah One. The Kay Slayer. The Rider of Snowblowahs, the King of Window Throwahs. And so now I have no choice but to fight Ty Jerome. I challenge you to Trial By Combat, you double dribbling son of a bitch. Mike Francesa forgot more college basketball (all of it. All of the college basketball hes ever known he’s forgot by now) than you’ll ever know, boy. You probably never even went to North Ave when you were underage. You were a twinkle in your father’s nutsack when Mike hit Numbah One. Put some respect on the Pope’s name, OK? Nobody cayuhs that you play in the ACC. Nobody cayhus that you’re top 5 in offensive efficiency. Congrats you won your title after 3 fake life endings. Why dont you go shovel an old lady’s wawk? Meet me at Lincoln Park, tough guy.