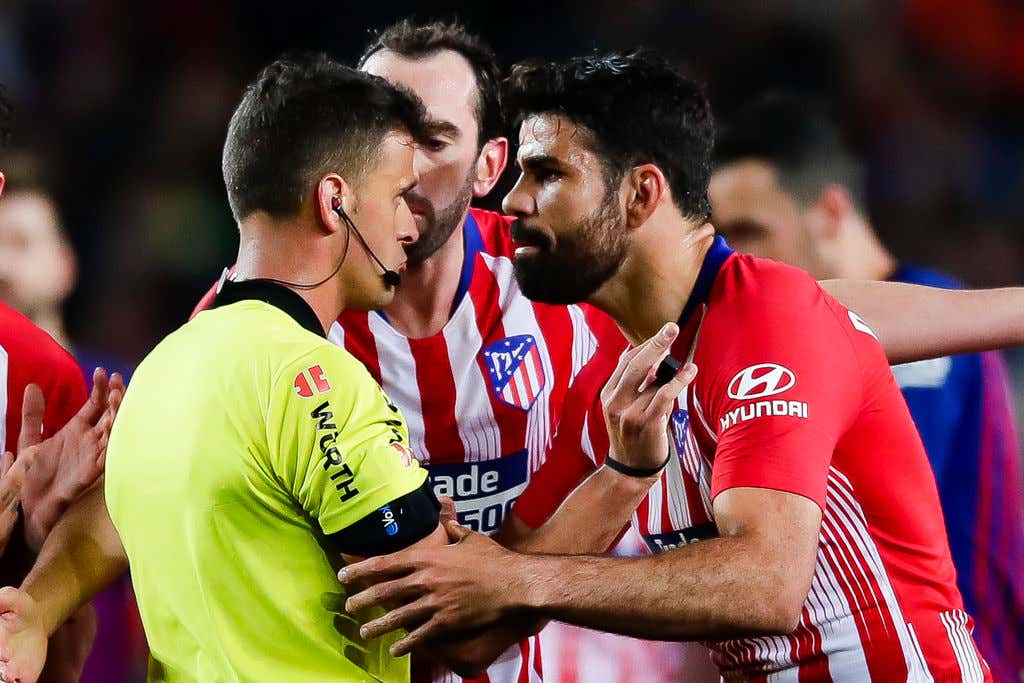 CBS – Atletico Madrid star striker Diego Costa could face serious punishment following his verbal abuse toward referee Jesus Gil Manzano in last weekend’s 2-0 loss to Barcelona in La Liga play. In the match, which all but assured the league crown will go to Barca, Costa was called for a foul when he went up to the referee and insulted his mother.

According to Marca (NSFW link), Gil Manzano allegedly said that Costa directed an expletive-filled insult at his mother. Atletico Madrid has claimed that Costa did not utter those words, and that he was directing the insult towards himself. In the ref’s post-match report, he also wrote the following according to Marca:

Costa could be set for a lengthy suspension according to Marca, one that could see him miss the last seven games of the league campaign. Putting his hand on the official likely makes it worse when it comes to a potential suspension.

Obviously the roles there are kind of reversed but you still get the gist of the reference.

Sooo yeah. As it turns out, you’re not allowed to tell a ref that you are going to “shit on [their] whore mother” and get to just suit up again for the next few games. I mean it’s kind of bullshit considering the fact that you can read the rulebook from the front cover to the back and nowhere in there will it explicitly state that you’re not allowed to tell the ref that you’re going to shit on their whore mother. But I guess this qualifies as one of those “unwritten rules of futbol”.

No here’s the biggest question. Would the suspension still apply if this wasn’t a threat made by Diego Costa? What if this was just a factual statement? What if he planned to defecate on the referee’s mother and the official’s mother was a willing and consenting participant in the act? I’m not here to judge. People are into plenty of different things. And if two consenting adults want to dabble in some feces play, it’s not my place in the world to tell them that they’re wrong. But does Diego Costa still get suspended here? Because from what I’ve been able to gather, it appears that the suspension is being thrown out there because this was considered to be a verbal threat to the official. Last time I checked, you can’t get suspended if you tell the ref you’re about to have a pizza for dinner and then you go out and have pizza for dinner. All I’m saying is that we just need to make sure there is no prior relationship between Diego Costa and the ref’s mom before we start handing out 7-8 game suspensions.

Now if that relationship doesn’t exist and this was meant to be a threatening statement by Costa to the ref? Well then surely he ought to be suspended. You can say whatever you want about the ref. But the moment you bring his mother into the equation? That crosses the line. If he just said that he was going to shit on the ref, well then I’d tell the ref to grow up and move on. But you can’t go around talking about people’s moms like that. Refs can be pricks, for sure, but just leave the moms out of it. Pretty simple. So again, we just need to make sure that this was a threat. And if it was, well then a suspension is justified.

P.S. – Can’t imagine Mrs. Costa is happy about this one.