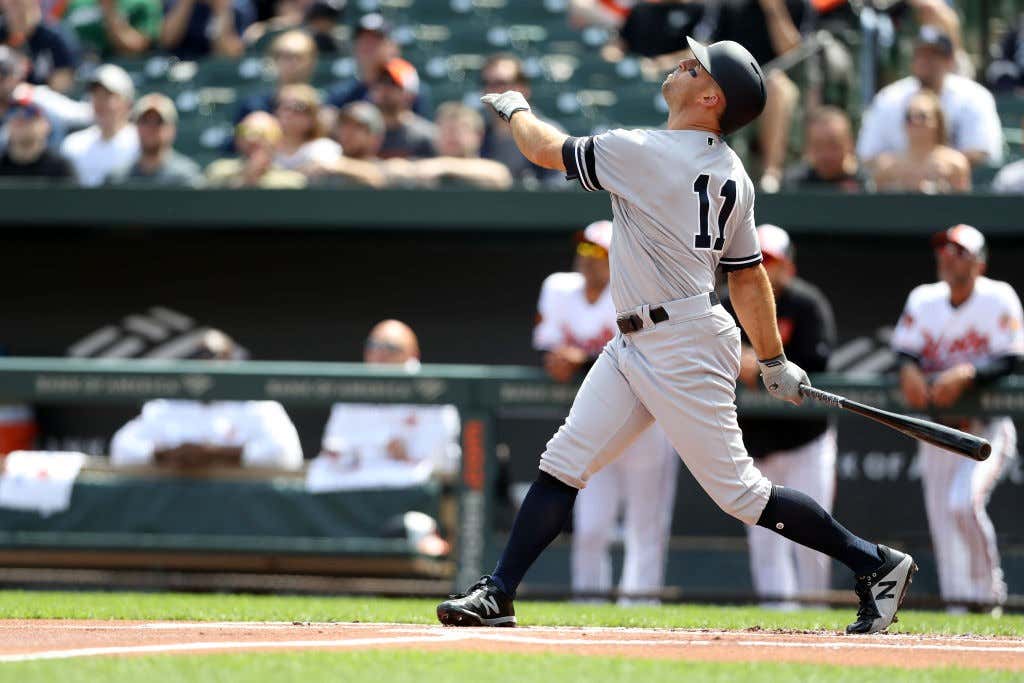 Oh whaddya know, the Yankees lost another game where they held a lead late. This has happened twice in Houston so far and it’s beyond frustrating. The Yankees have actually led in 10 of their 11 games this year, only to win 5 of them. I know they have a ton of injuries, but they should be no worse than 8-3, which is especially frustrating when you see how bad the Red Sox are playing right now. We’re not capitalizing on any of this and it’s going to hurt when the Sox start turning it on (they will eventually we all know that).

The Yankees are a fundamental mess. They don’t catch balls hit at them, they can’t execute a simple bunt play, they run into each other on the field. Watching the Yankees play baseball right now is flat out ugly. I had a little throw up in my mouth by the time the Astros scored their sixth run of the game. They without question should be going for a sweep in Houston tonight, instead of trying to avoid being swept.

I love Clint Frazier and I think his bat is what we need in this lineup, but goddamn I don’t know what the hell he was doing out there last night in left. My guy is diving for balls trying to be Jim Edmonds when he can simply just run in and catch them. The ball hit by Bregman absolutely could’ve been caught standing up.

Both times this happened, singles turned into doubles, which really should have just been outs. Then later in the game he became gun shy and pulled up short on a ball that Chad Green hoped would be caught. Chad was NOT HAPPY.

Then you have Austin Romine last night, who many of you herald as the second coming of Yadier Molina behind the dish when you compare him to Gary Sanchez. I like to think of myself as one of the bigger Gary Sanchez supporters out there. Did I think last year he should’ve been benched? 100% he needed it, 2018 was a disaster for him mentally. In 2019 I’ve been all aboard the Gary train way before the season started. I believe in Gary, and so far he’s been fantastic offensively and defensively. Yes, you heard me right, defensively. Sure his first week he had that weird thing with the throwing the ball in the outfield, but I think we all know that was an aberration. In terms of blocking the ball he’s been a different person. Guess how many passed balls he has this year? Zero. That’s right boy. Zero. As in less than one. Granted, it’s only been eight games, but you can see with your eye how much better and quicker he’s been behind the plate. So far in 2019 Gary has answered everyone’s criticism and been one of the biggest bright spots on the team.

Austin Romine last night was atrocious behind the dish. He looked like 2018 Gary Sanchez, and if I can be frank he really hasn’t been that good defensively since the second half last year. Could you imagine Gary making those plays last night? He would have been CRUCIFIED. Everyone NY Sports Talk Show would be talking about how Gary needs to be the permanent DH. This is exactly what Ryan Ruocoo was talking to us about on The Short Porch with how Romine never gets any blow back if he doesn’t block a ball or simply doesn’t catch a fastball down the plate (happened last night). Everyone looks to shit on Gary and ignore Romine’s miscues.

ENOUGH WITH GARDNER THE LEADOFF GUY

Brett Gardner needs to be gone from the leadoff spot. I don’t know what we’re doing anymore forcing this, but it has to stop immediately. Gardy is a shell of himself, and we knew this coming into 2019. I don’t mind him in the lineup as long as it’s the number 9 slot. He’s currently slashing .195/.313/.317. Yeah, that’s really bad folks and it’s not really a shock to anyone with a brain. Gardner leading off in front of Judge is killing this lineup. It’s so wildly unnecessary and makes zero sense. Have Gleyber Torres lead off, have DJ LeMahieu lead off. Anyone but Gardner. This is madness. In the 3rd inning with the game tied at 1, the Yanks had two on and nobody out. Gardner squared around to bunt and then just didn’t run. He thought it was foul and just didn’t run. The result? A fucking rally killing double play.

Lastly, the bullpen has not been stellar. To be fair, when the man holding the keys to the engine is Aaron Boone, backed by his analytics team and Larry Rothschild, there’s going to be some severe mishandling. That being said, lately the bullpen just hasn’t gotten it done. Two nights ago Zack Britton just has to do his job and get through the 7th inning without being lit up. Last night it was Chad Green. When we saw these names on paper before the season people (myself included) were saying “best bullpen ever.” Through 11 games they sit 12th in ERA with a 3.70. giving up 17 runs in 11 games. Last night Green just didn’t have it, walking two, giving up a leadoff single, and then Springer’s two run double which gave the Stros the lead for good. Should Boone have pulled Green after the two walks? Well yeah no shit, but Green just has to pitch better than that, bottom line. Will things get better when Dellin returns (whenever that is)? Absolutely, but until then these guys have to be the relievers we know them to be. That sounds so vague and Aaron Booney but it’s as simple as that.

Tonight you have Paxton on the bump to avoid the sweep. He looked shaky in his last start in Baltimore, but settled down to give the team some length. Let’s hope he’s lock down tonight and gets us back home on a positive note for the White Sox. Clean this shit up. Last night was a night where this team needed a maniac to threaten lives after the game. Someone needed to go nuclear and hold people accountable. Boone ain’t going to do it, someone like CC has to, but he’s not here yet.