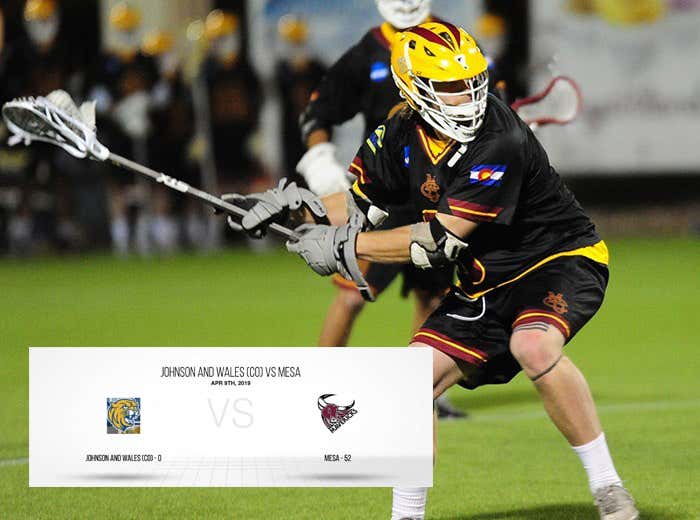 So yesterday we had the 5-6 Colorado Mesa Mavericks taking on the 1-9 Johnson & Wales (CO) Wildcats. If you’ve never heard of either of those programs, welcome to the party. They are both NCAA DIII teams out in Colorado who…I mean…I don’t know. It’s DIII lacrosse in Colorado. What do you want me to say? (UPDATE: Apparently Colorado Mesa is a DII school. Doesn’t really change much about the story, however, considering they have a loss to a DIII school on their schedule this year)

But keep in mind here that Colorado Mesa is 5-6 on the year. They are a sub .500 team. It’s not like Salisbury accidentally ended up scheduling this random ass team in Colorado and then proceeded to put up 52 on them. This is a team that has been on the receiving end of 12 and 13-goal losses already this season. And they beat this team FIFTY-TWO to zero.

Now I know there are some people out there who are going to think that it’s a dick move to run up the score 52-0. And yeah, I mean it’s definitely a little overkill. But keep in mind here that there is an 80-second shot clock in college lacrosse now. I did the math here and scoring 52-goals in one game comes out to roughly a goal every 69 seconds. What would you have rather this team done? Just throw the ball around in a circle for 80 seconds and then throw it out of bounds so the other team can have a chance with the ball? Get out of here. In no way is that better and the only thing it really does is increase the chance of somebody getting hurt because the other team decides to start slashing the shit out of you to take the ball away.

The real dick move here is even putting out a team that is capable of losing 52-0 in the first place. That’s not fun for anybody. It’s clearly not fun for the team getting shit pumped 52-0 and it couldn’t have been fun for this Colorado Mesa team after already being up 14-0 in the 1st quarter. If you can get beat 52-0 by a team that isn’t even .500 on the year, well then maybe your school probably shouldn’t have a program anymore. At least not at the NCAA level.

Fans of lacrosse are constantly talking about “Grow The Game”. But maybe…just maybe…the game has grown a little too quickly. There are probably a few schools out there that probably don’t need to have NCAA lacrosse teams. So maybe there should be some sort of relegation process put in place here. If you ever lose a game by 30 or more goals, you should have to sit the next season out and play club or something. Then that way, the NCAA can give some of the best club teams in the country a trial run in the NCAA. Maybe a team like Michigan State should be allowed to take Johnson & Wales’ place for a year and see where they’re at. I bet Michigan State ends up beating Mesa by at least 7 or 8 goals.

I don’t know. Moral of the story here, however,  is that these are college kids. They are grown enough to where nobody should have to care about their feelings getting hurt if they end up getting the score run up on them. Was it a dick move to put up 52 in one game? Maybe. But it’s even more disrespectful to show up to a game that underprepared and end up losing by 50+. At that point it’s pretty much entrapment and you’re just setting the other team up to look like a bunch of dickheads.