What a little shit eating grin from Stan there. Laugh out loud funny. Last night was an ENORMOUS break for the Blackhawks in the rebuilding process. No, they’re not getting Hughes or Kakko, probably the only two guys that will be ready to step in right away next year, but they’re going to get a truly top end player. A guy who you can pencil into your top 6 or top 4 quickly and then for years to come. Last night, I reacted quickly with the guys who I would want to see the Hawks select and after a solid 6 hours of sleep and some thought I’ve got three guys I would be happy with 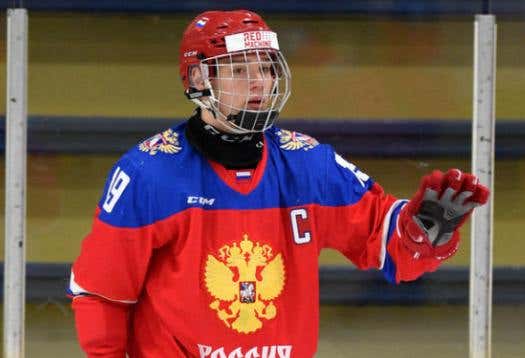 So here’s the deal…Podkolzin might very well be the 3rd best player in the class. All the reports about his talent and demeanor are what you want to hear. Ideal size, speed, skill, and very competitive on the ice. I have an agent friend who told me last night that NHL scouts are saying that the gap between Podkolzin and Hughes/Kakko isn’t even that big. Some scouts have him ahead of Kakko.

You can’t trust Russians though and you certainly can’t trust players who are own by SKA St Petersburg. SKA is short for “Sporting Club of the Army”. Meaning that it’s Putin’s team. The team that Putin allegedly rigged the entire KHL playoffs for last year to ensure that they would win. SKA owns Podkolzin for another two years and then who knows how long after that. If Putin wants him to stay then he will probably stay with a contract that ensures some Natural Gas rights near the Black Sea. And if you’re picking in the top 3 for hopefully the last time in a long time you can’t roll the dice on a kid with an X-factor as big as a Vladamir Putin. Podkolzin is out.

Which brings us to.

Size, speed, and an ELITE shot. Best of all… he is responsible defensively and plays with a mean streak. When you read about and watch all of the highlights it’s hard not think of Ryan Kesler and Ryan O’Reilly. Cozens seems to be cut from that kind of cloth. And while he may top out as a #2 center on a contending team…that is more than okay in Chicago where the Blackhawks have Toews and Strome locked up. Cozens doesn’t have to be a franchise center. He just has to be really really good while other players carry the main offensive load. And then who knows, eventually when there may come a time when the Blackhawks ask Toews to do a little less. Maybe they have three truly equal centers and can roll lines.

Drafting Cozens might also change the Blackhawks plans this summer. I think there is mutual interest between the Blackhawks and Kevin Hayes. If you draft Cozens and plan to re-sign Strome then signing Hayes to a 6 year deal doesn’t make a ton of sense. Perhaps now the Blackhawks don’t try to trade Anisimov this summer and instead put their free agency dollars towards signing a top 6 winger and/or a top 4 defensemen.

I know, I know, I know…another defenseman, really? I think when you’re picking this high it is important to just get the best guy. Whoever it is, regardless of position. These kids are 18. Who know what the organization is going to look like when these guys are in their prime in 5-7 years. Byrum is a left-shot defenseman who can run a powerplay but also logs BIG minutes for a really good team with the Vancouver Giants. Scouts say he’s not far away from being ready for the NHL. Maybe only a year. So in a year the Blackhawks could have their top 4 left shot defenseman to go with all the talent they’ve stockpiled on the right side. AND…maybe this frees the Blackhawks up to trade some of that prospect capital in Jokiharju, Boqvist, Mitchell, Krys, and Beaudin for forward help.

When you’re picking this high you can’t have a bust. I can guarantee that Turcotte won’t be a bust. I saw him play in person a couple of times last year and without knowing anything about anyone on that team I kept being like “who the fuck is that kid”… and almost every time it was Turcotte. He does everything at an elite level and I bet if he were 6’2 instead of 5’11 he’d be talked about more commonly in the same breath as Kakko. He’s probably a year away from playing a major role in the NHL. Another guy who can play center, but might come into the league innitially as a wing to ease the transition. The Blackhawks obviously need some help at forward in their pipeline and Turcotte would certainly bring that and in short order.

We will definitely be running the draft party back at Declans