My flight left New York City at 2:50 aka 14:50 in the more cultured way of saying the time which ether implies your in the military or living in a country that were probly going to invade at some point so you better get used to saying the time our way. To get there you literally have to fly straight up in a pattern that takes you over western Greenland and the north pole then back down through Russia, China then finally landing in Hong Kong. Its the most north/south flight in the world which means no one flys coach we all fly coach’s son.

They dont have wifi on the plane so all I had to entertain myself during the exurson was books, movies, TV shows, podcasts, and anxiety medcation used to knock myself out for 10 hours of it. I started the flight reading the autobiography of nat turner and finished it by watching green book so I saw the impact of racism and solved it in less than 12 hours which has got to be a record. The rest of my movie reviews are as follows:

2. First Man- Ryan Gosling flys to the moon to get away from his nagging kids, forgets his American flag.

3. The Lobster- what the fuck? I wish Eternal Sunshine was real so I could use it on the part of my brain that tried to understand what the hell was happening. Always very dispointing when theres a Collin Farrell movie that dosen’t involve a phone booth.

4. Bohemian Rhapsody- Freddie Mercury gets divorced because hes too creative, Brian May looks like someone playing teenage Howard Stern, they break up but then get back together to solve once and for all the famine in sub-saharan Africa.

Upon my arrival to Hong Kong, I googled “what is hong kong.” And let me tell you, theres so much you can learn about a culture by googling what it is while your in its airport. One of the first things I found out there was that Hong Kong wasnt actualy owned by the British it was mereley on a 99 year lease after the opium wars before it was turned back over to the Chinese in 1997 kind of like a Bobby Bonilla type deal that was made back in 1898. Hong Kong keeps getting regifted and getting better and higher in value. it’s like a patriots draft pick. Its been owned by the Chinese Communists, Japanese Imperialists, Chinese Nationalists, British, and now back to Hong Kong/Chinese again. Its now the worlds 7th largest financial market

The georgraphy there can best be described as a big bunch of rocks that is part Times Square and the other part looking like if you moved the east village to the agro crag. They also have a Jurrassic Park/Mickey Mouse island with a Disney Land on a self contaned strip of lush jungle in the middle of the South China sea which is pretty bad ass we need more theme park islands like that in the US not just itchy and scratchy land.

Public transportation there is super fast like it was designed by if Elon Musk’s brain was connected to the body of a goverment with the means to actualy contuct any of the stuff he dreams up when hes smoking midgrade with his girlfriend. I got from the airport to the city center in like 30 minutes where I was greeted by my new best friends Donny and his intern Chef Donny. 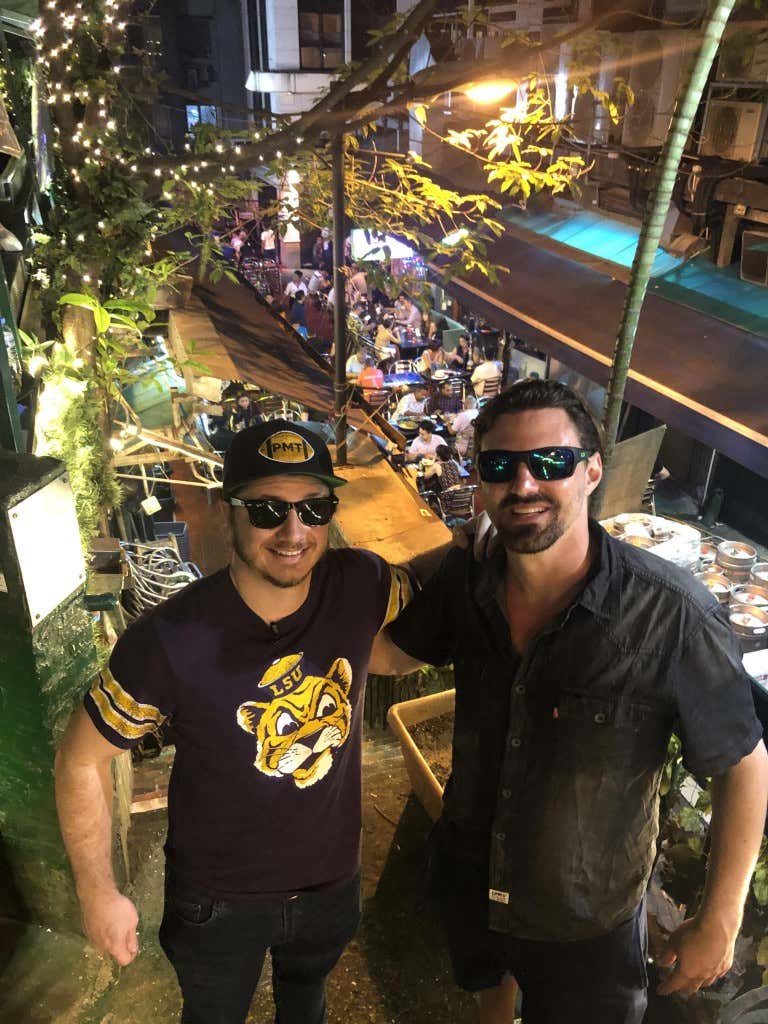 Saturday we went to Hong Kong Stadium at about 630 AM which is just a bizarre time to be granted admisssion to a ballpark. Heres the thing about a country that is technicaly controlled by communists is they dont even name their stadiums after loan companies which left a real bad taste in my mouth.

The stadium crowd was like a diverse costume party mixed with the Superbowl so you couldn’t tell where every person was from. We were all so dressed up that depsite about 50 countries being represented in the stands we forgot about our diffrences and partied as one. If I could impart one valuable lesson from this its that there are no atheists in foxholes and no xenophobes in a spirit Halloween store. 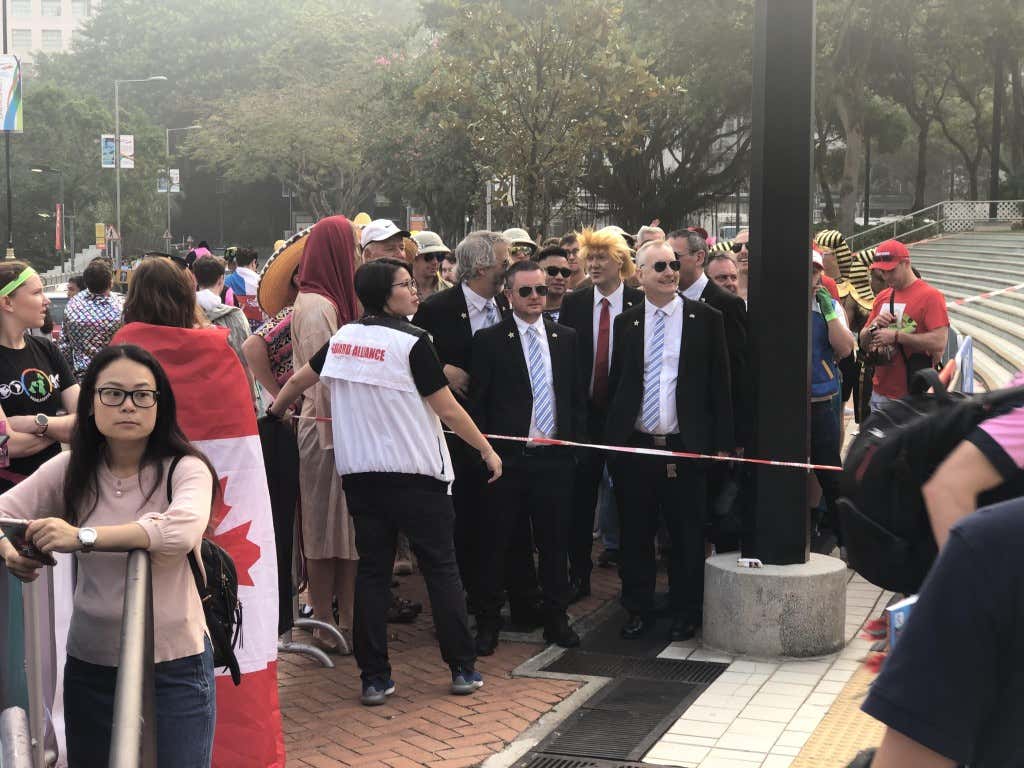 The stadium itself fits 40,000 people, about 10,000 of which are in the south stands- and that my friends is were the magic happens. This place is so notorous for all the partying they have a rule where if you buy a refillable beer cup for unlimited beverages throughout the weekend, they dont let you bring that into the South Stands because Carlsburg would go bankrupt.

On Saturday morning you coud tell the fans were big supporters of the United States because they started drinking beer to honor us at 5pm Friday night, US time. Serving exessive amounts of alcohol allows stadiums to save valuble money on BMI music licensing rights and assocated DJ costs since you can play the same three songs all day and no one remembers. In this case it was the “I Would Walk 500 Miles” song and David Hasselhoffs “Hooked on a Feeling” which has lyrics that are mainly grunts from a Tim Allen stand up routine allowing for a easy singalong.

It was a blistering 80 degrees (not sure what unit of measurement they use but just assume its celcius or fahrenteid, whichever one makes this story seem better to you), and the only sunscreen Donny had was 110 SPF which is basicaly a hijab in a bottle. No thanks Im tougher then the sun pal. Thats right, the fucking sun.

The food situation looked like it was designed by Gordon Rameys goth brother and consisted mostly of porridges, currys, and meat pies. Basicaly someone sat down to create a menu of the least practical stadium foods and then made you drink a fifth of jack daniels before you had to eat it upside down. Meat pies are great the only thing is they raise your internal body tempreture when taken orally by like 20 degrees and cause similar symptoms to H1N1 from varous other orifices later, leading to bathroom stalls like this: 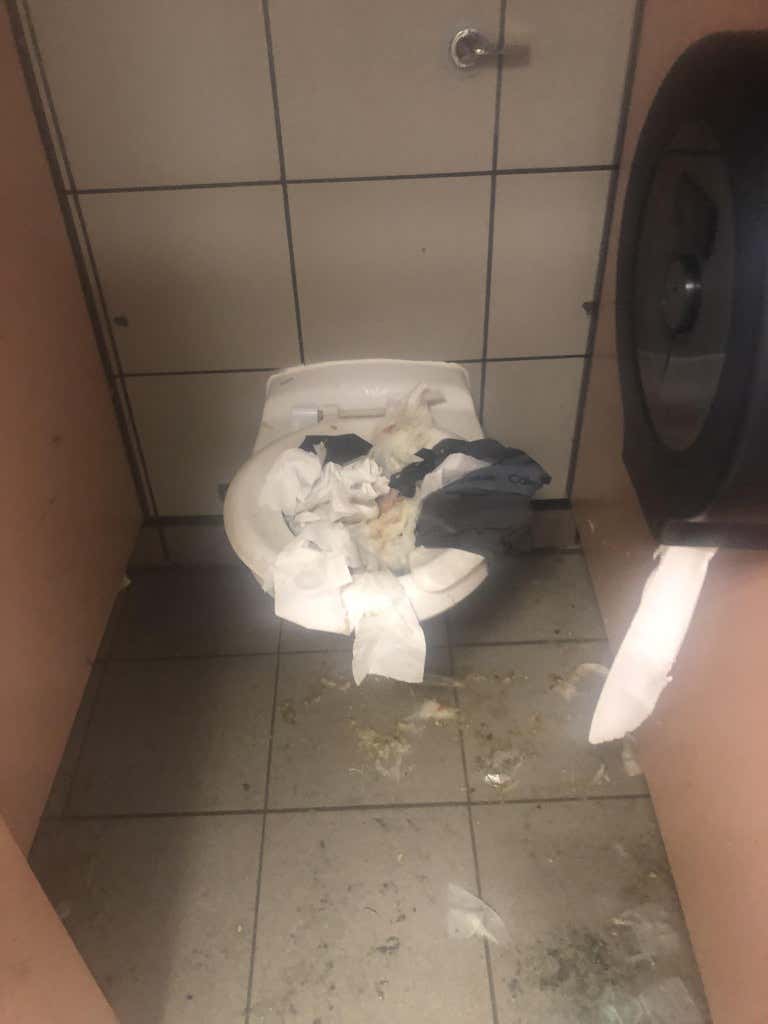 Decided to just not eat anything else at that point.

Our first game was US verse Spain- and we kicked their ass so thoroughly they were elimnated on firday evening at 8 pm giving them enough time to make it home to Madrid in time for dinner. Next up was Wales and we defeated them in a 30-28 loss for the US that gave us enough points to qualfy for the second round. England beat us, whatever. Revenge for when we beat them by tying them 1-1 in the 2010 worldcup.

We hit the stands to get some intervews with fans all of whom were especially kind except for the guy who tried to punch Donny in the face for waking him up, which in retrosepect is fair. You know your not doing man on the street stuff hard enough if your not getting physically attacked by your interview subject.

After qualfying for the Cup championship we deicded to hit the town (expect videos coming next week). Highlights included telling a HK vicecop my favorite joke in the world, and witnessing 20 HK police officers walking out of a bar after shutting it down for prostution, getting a full rundown on teen slang from British and Australian youths, and saving a young mans life as he was about to fall off a cliff not to brag. Also a Ryen Russillo look-a-like conventon was in town so that was a real treat.

Sunday is a day for rest so I opted to not indulge in as many alcohols and instead tone it down by taking MDMA for the first time. You know your cool when your googling “how to take (the drug youve just acquired) so I was feeling pretty good about myself. We mixed it with half a beer each and sat back and waited.

Heres what I can report stream-of-consciousness style about taking MDMA in a packed foreign stadium filled with drunk people in costume:

-These drums are so great

-The David Hasselhoff song is on again

-Carlin Isles is so fast he made me cry again. someone asked me if i was upset. No the man on field field made me cry because hes fast. Try to keep up

-I found out that someone has my shirt but I forget who said it. So now my shirts still lost

-im crying again because im real happy and its beautiful

-Saw myself on the jumbotron Ive gotten fat its diet time 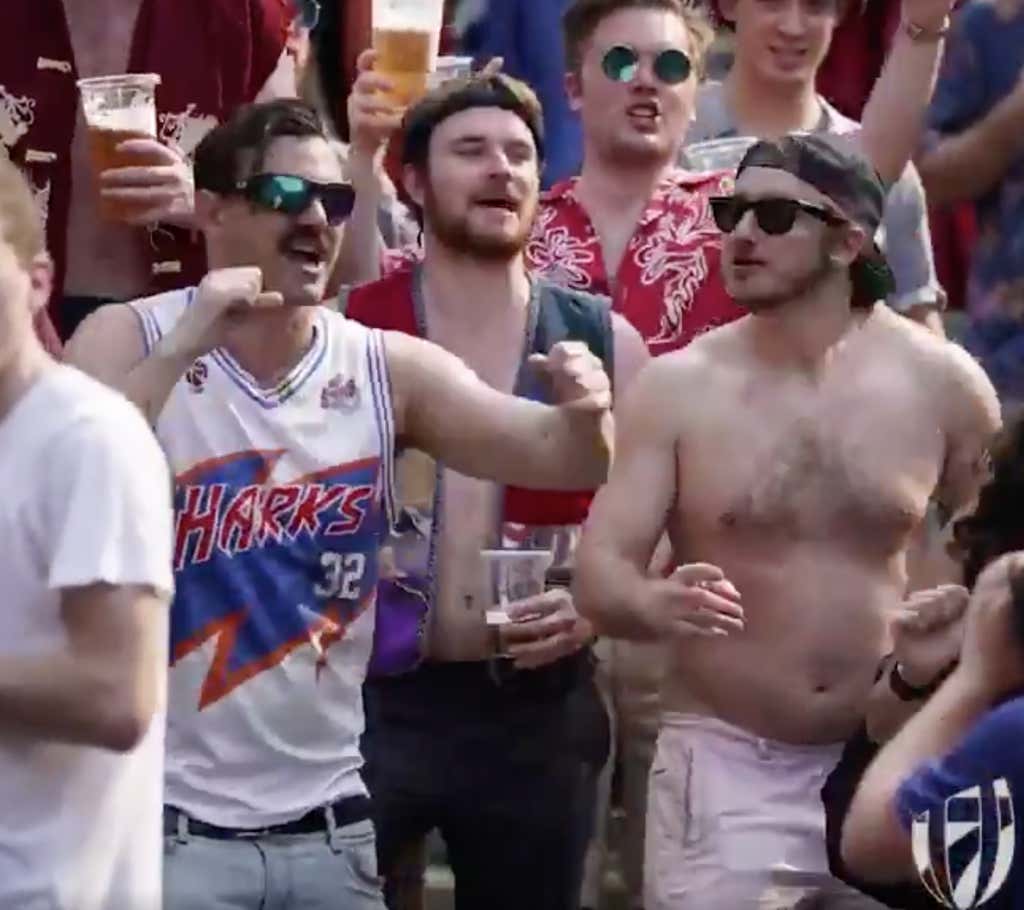 -this Australian just taught me that when your saying bye to friends dont say “I’ll see you later”. Say “I’ll see you next time I’m looking at you”. Pretty sure this is just a Australian translation of confucius and this is plagerism

-Since Hong Kong is 12 hours in the future, after taking the drugs I can report with absolute certanty that there are flying cars, David Hasselhoff is back, and global warming must be very real because I am sweating my back off the entire time 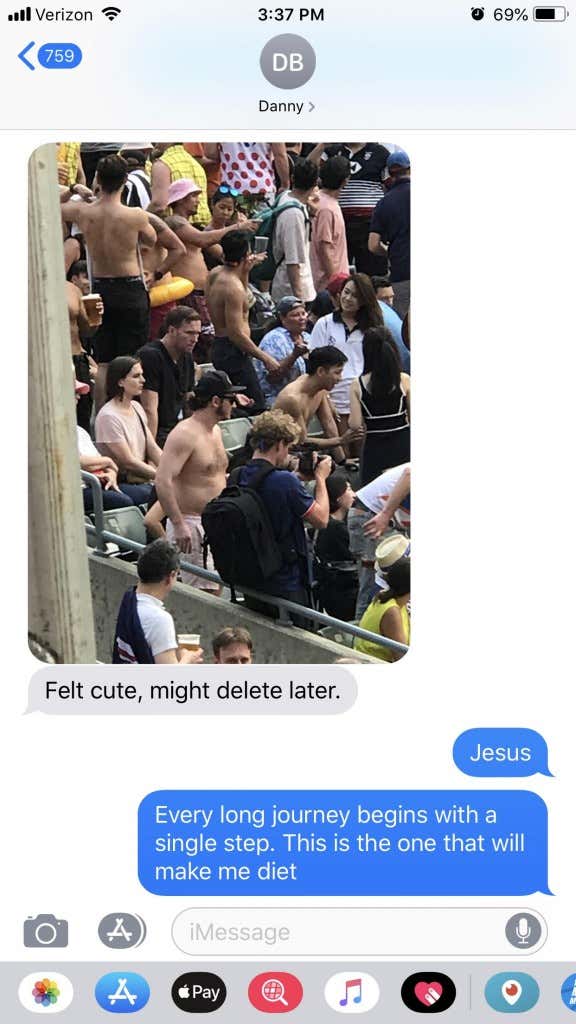 -Positive vibes only. Need my shirt. Gotta put that sucker back on post haste

-It feels like i’m getting electrocuted with a new good kind of electricity. Im the new Benjamin Franklin

-The David Hasselhoff song is playing one more time

-We lost to Fiji in the semi-finals.

-Traditional Islander tattoos are so boss. I want to get one but I dont think Im aloud

-I just got hit by a cup of piss from the top of the stadium. There body is a part of mine now. Its kind of beautiful but it would be kind of cool if it wasnt piss though

-Remember Beezin’? I’m gonna teach all these foreigners about Beezin

At this point the effects wore off and I got to enjoy the USA beating Samoa in the 3rd place match. US is back baby. The piss was flying left and right while France lost in a important battle as is tradition, and Fiji took home their 5th consecutive Hong Kong Sevens champsionship, leaving the USA at the top of the world standings for another week while we head into Singapore.

After the tournment me Donny and Chef Donny went out for Dim Sum which is Chinese for “stuff you eat and figure out what it is after you bite into it.” Donny and Chef Donny are awesome people and it was a absolute blast spending this whole weekend with them. All in all one of the greatest times of my life. There will be multiple videos coming soon of our entire travels including highlights from our Sunday that I detailed above. I for one, cant wait to see it again for the first time.