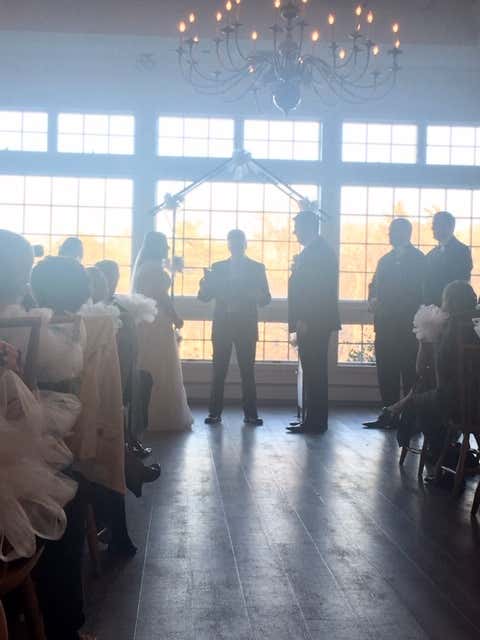 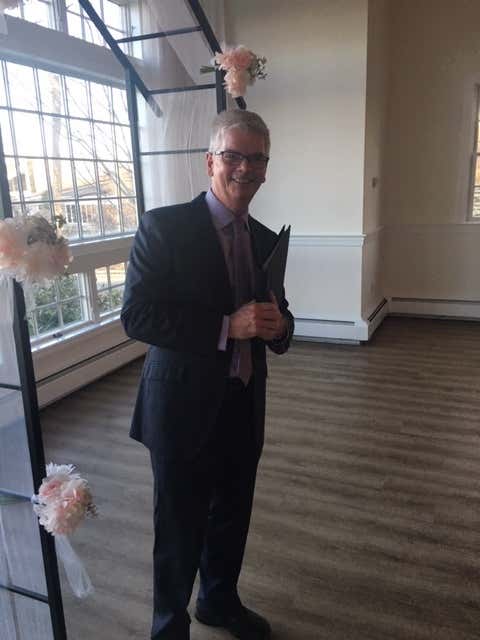 Over the weekend, I was the minister who officiated the wedding ceremony you see above. If that sounds weird coming from a guy who spends most of his life burping the alphabet into a keyboard about pro football, celebrity hijinks, nerd culture and sex scandals or telling dick jokes in comedy clubs, you’re not alone. It’s weird to me too.

And yet this was not my first. As a matter of fact, it was my third official wedding. And I’ve got a fourth scheduled for next year. I’ve also performed an unofficial one for some neighbors who were renewing their vows on their 25th anniversary. And I’ve emceed two. I think I was going to do one this fall, but that was never confirmed because apparently the groom is a Steelers fan and was expressing some reservations about injecting a Patriots writer into his big moment, I guess. But it’s a moot point anyway because the couple split up. Which is fine by me because I don’t want a divorce spoiling my perfect record to this point.

So how did this turn into a side gig for me? I’m not entirely sure. The first one I emceed was the most unlikely just because it was years before I’d ever done comedy and the last public speaking I’d ever done was the final in my college Speech class, which was entitled “What Makes Women Think?” and included visual aids like a rendering of the parts of the female brain that makes them love refrigerator magnets of koalas and hate The Three Stooges. (I aced it.) But after visiting my sister who was living in Honolulu, her best friend asked if I’d come back out to be the MC of her wedding. Either because she thought I could do it or because she wanted to entertain her guests with the spectacle of a pale, sunless, almost translucent Irishman with a Masshole accent trying to pronounce names like Kaihuopalaai and Kaukonahua.

The first actual time I was legally given the power to unite two human beings in matrimony for the rest of their lives, the bride was one of the original Stoolies. From back when we were just a bi-weekly newspaper with a Message Board of people who formed a social circle. She and I became friends. She started dating a guy. He and I got along. Since I knew them well and had been doing stand up for 20 years by then, it made sense I guess. And once you’ve done one, people who don’t want a religious ceremony tend to ask someone with some experience, I guess. So since hers I’ve done two more actual weddings. The son of that couple who’s vows I renewed. And my friend’s sisters down Cape Cod this past Saturday. Next year I’m doing one of the bartenders at my favorite local townie bar.

And in between, I emceed one for a couple of my own Enchanting Irish Rose’s musical theater friends. Which was especially compelling for me because it had a Star Wars theme. So I rewrote the First Letter of Paul to the Corinthians (“Love is never boastful, blah blah blah”) that you hear at every wedding entirely in Obi Wan and Yoda quotes. “Love is what gives a Jedi his power. It’s an energy field created by all living things. It surrounds us and penetrates us. It binds the galaxy together,” etc. That was a proud moment. My worlds coming together.

So with that as preamble, here are some of the basics I’ve learned as I try to get better at this with each successive wedding:

Rule 1: Becoming a wedding officiant is a simple process.
As a practical matter, it’s as simple as getting ordained from one of the online services. It’s good for one ceremony. After that you have to renew. So while I’m ordained, you don’t want to be asking me to deliver your last rites because I will leave you to die in sin. The one I use costs nothing. But if you want a nice certificate to make it look official (but probably has all the authenticity of the diploma the Wizard gave to Scarecrow), that’ll cost you $8.99, plus shipping and handling. You can also order any number of their accessories, including a $50 kit that includes everything from sashes and decals for your car to handy cups for carrying around the Eucharist, if that’s your thing. So far I’ve stuck strictly to the certificate. But I did splurge on the same t-shirt that Ian McKellen wore when he did Patrick Stewart’s ceremony: 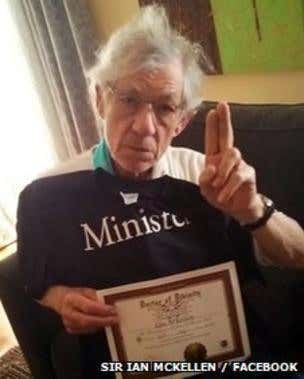 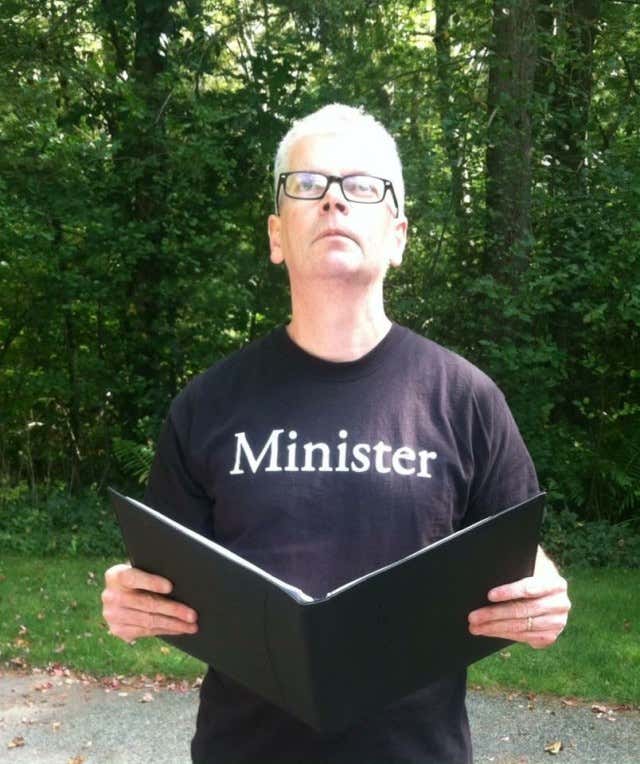 The rest of it is junk I don’t need. But given the choice I’m not going to not show up dressed like Gandalf/Magneto when he did Picard/Xavier’s wedding.

Rule 2: This is the biggest day in the bride’s life and it is 100 % about her.
This should be common sense. Confirmed by the approximately 25 hours of TV my own lovely wife watches per week of psycho brides shopping for wedding dresses. This point was driven home best when my older son graduated from Parris Island, and one of the first things he said was his COs told the new Marines not to wear their USMC gear around like dildos. Especially, they said, don’t wear your dress blues to weddings. The day is all about the bride and no one else. And showing up in your uniform is just taking attention away from her and therefore a dick move. When you’re doing the ceremony, you’re not there to work on your tight five for Open Mic Night or tape your Netflix special. A joke helps. It’s even essential. The bride from this past weekend told me after she was super nervous and making her laugh broke the tension. A later joke is also welcome. I don’t have an exact number but I’d say if you’ve added a fourth laugh line, cross it out. Three is your limit.

Rule 3: It’s Pass/Fail. Success is simply not failing.
Years ago on my WEEI podcast, my buddy Uncle Buck and I got to talk to Boston TV legend Bob Lobel about the live hour long interview he once did with Ted Williams, Larry Bird and Bobby Orr, who had never been in the same room together. And he said it’s the most scared he’s ever been because he said with a once-in-a-career opportunity like that, he couldn’t make it great; he could only screw it up. To the point that he has never once watched one of the most historic programs in Boston sports history that he hosted. That is what standing there calling the shots in the biggest moment in two people’s lives is like. So don’t overdo it.

Rule 4: Don’t think about Rules 2 and 3.
Relax and don’t think too much about what’s at stake or you’ll start listening too much to your own head voice and you’re cooked. I’ve have comic friends make it to Conan and The Tonight Show and I can’t imagine the pressure of having your whole professional future come down to a two-minute set. To the people walking down the aisle toward you, those are the stakes and it’s your set. So block that out and be in the moment. Just don’t be a Tryhard. Once everybody hits the bar and sits down for the salad course, they’re not going to be reciting your pearls of wisdom. There won’t be any colleges hosting panel discussions debating the philosophical points you made. Twenty years from now the bride and groom are just going to remember how much fun they had, not the way you touched their hearts. The only way anyone is going to remember what you do is if you freeze up, pee yourself or burst into flames. So don’t do those things.

Rule 5: Keep it positive.
Here’s another one that sounds like common sense but if you’ve gotten married yourself you know exactly what I’m talking about. Tell someone you just got engaged – and I mean anyone, your brother, your best friend, the girl at the drive through window, the homeless guy furiously pleasuring himself on the 5:15 train – and they’ll immediately start with the negativity. Marriage is a lot of work. It’s not easy. There’ll be tough times ahead. You have to learn to work through your problems. For some reason, telling someone you’ve reached out to another human soul and the two of you have vowed to legally codify your love into a bond of commitment that will last until the end of your days turns people into the filling station guy who warns a carload of teenagers not to go to that cabin in the woods. We got married in the Catholic Church and they make you take Pre-Canae classes in which a priest lectures you about how hard marriage is. Like he’d know. I mean, I’ll take all the advice on faith and life he wants to give. But I’m sure that when I’m looking for guidance on the challenges of married life, a man with a steady income, free housing and a vow of celibacy is my go-to voice of authority. There are give-or-take 150 Irish songs with metaphors about how marriage is a relation “ship” you sail through troubled waters or whatever. So while I’m wearing the mic standing between two people in the last few moments of their single life, I try to say nothing that makes it sound like they just volunteered to help clean up after a natural disaster. To tell them what it would’ve been nice to hear when I stood in the groom’s rented shoes 25 years ago. That marriage is fun. It’s not fricking drudgery. Done correctly, it’s enjoyable. So knock off the Dr. Phil. Is it work? Sure. Sometimes. But so is work work. But no one congratulates you at the end of a successful job interview, says you’re hired and then launches into a tirade about how there’ll be days you’ll hate your job and want to pull the vending machine in the break room down on your own head to end your suffering. And why just assume the couple standing at the front of the hall proclaiming their commitment to each other in front of everyone they care about will make each other unhappy? Stop projecting. Be happy for them. And make them happy they chose you.

P.S. I suppose I’m available for anyone who wants someone with experience. So long as you don’t mind a Pats fan.