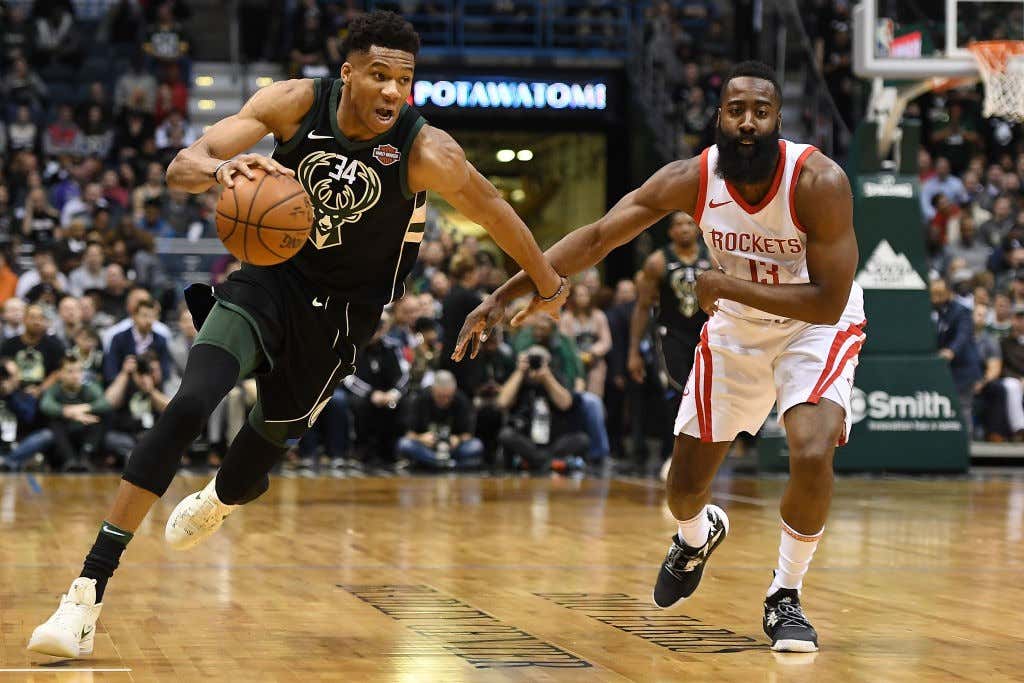 I LOVE anonymous NBA player polls. Love em, can’t get enough of em. So when I saw that The Athletic put one out after polling 127 players , I couldn’t have clicked fast enough. Combing through the results there were some surprises, some choices that made me legit laugh out loud, and others went about as you expected. After combing through, here’s what stood out

We may as well get this one out of the way early. Who do players think is the MVP?

If there’s one thing we know, it’s that players respect the hell out of James Harden. Remember when he got robbed of an MVP during Westbrook’s year but then also won the player’s choice for MVP in that fake award show that happens every year? The media may hate James Harden and his game, but the players know what’s up. In fact, the surprising part to me was that it wasn’t as close as I thought. Everything you read/hear these days is that this is a neck and neck race, but according to players it’s pretty clear who the MVP is and I imagine Rockets fans whole heartedly agree. 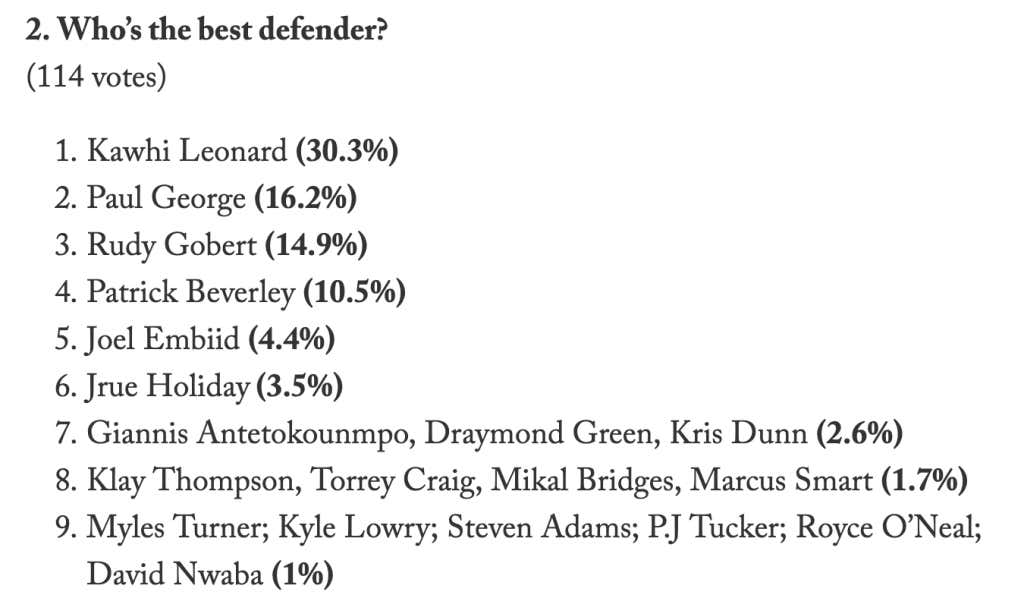 This I find shocking for a couple reasons. Not because Kawhi was the overall choice, that’s expected. But how can Giannis be so low? The man legit should win the DPOY award this season, yet he got just 2.6% of the votes? I don’t know how he doesn’t finish this top 3 at the very least, like how does someone think Kris Dunn is every bit the defender that Giannis is? Also, a little low for Myles Turner and PJ Tucker too, one of which leads the NBA in blocks and the other may be the most underrated defender in the entire NBA.

This is hilarious for a number of reasons. First, I’m not convinced any of those 47 players actually knows who Semi is because he barely plays. Unless they are factoring in Celtics Twitter, I don’t know how anyone could consider him overrated. Is that because he’s a Giannis stopper? That’s not me talking, that’s science

Also, is KAT overrated? People really think he’s not one of the most devastating young bigs in the league? It’s not his fault his team forgets he’s actually on it for long stretches, he puts up monster numbers and is young as shit. I feel like that’s a stretch too. 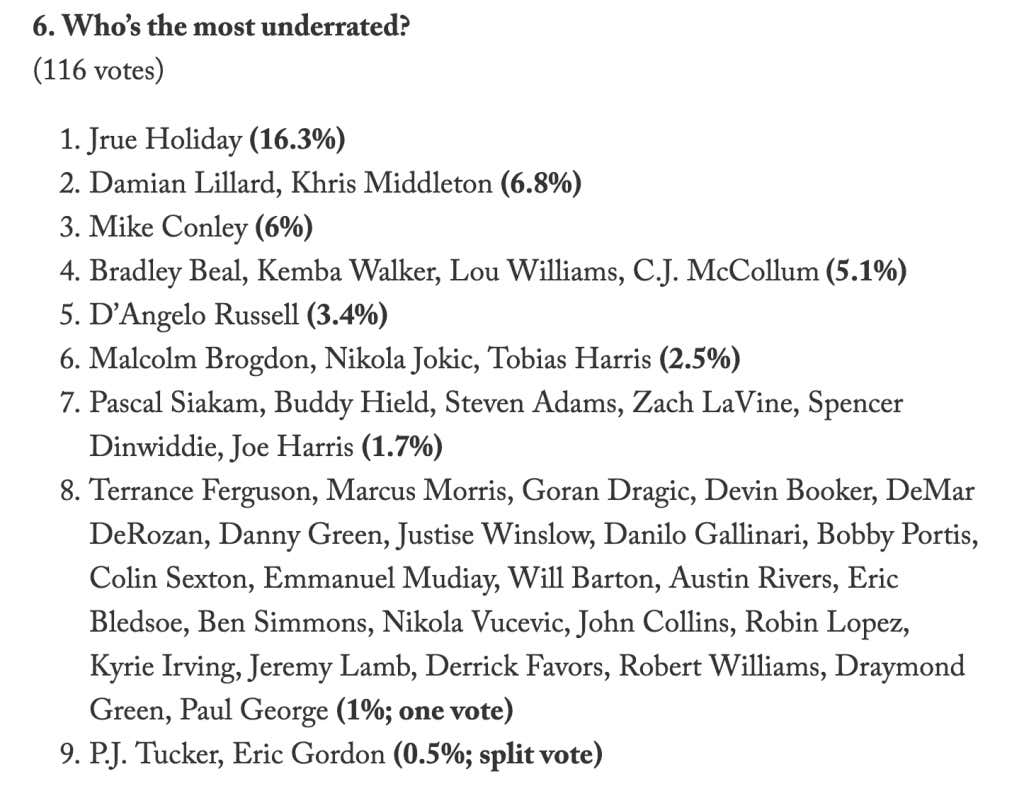 This list is much more accurate in my opinion. All these guys are underrated as shit. Well, maybe Middleton is slightly overrated if only because he’s been so underrated if that makes any sense, but I think the players nailed this one. 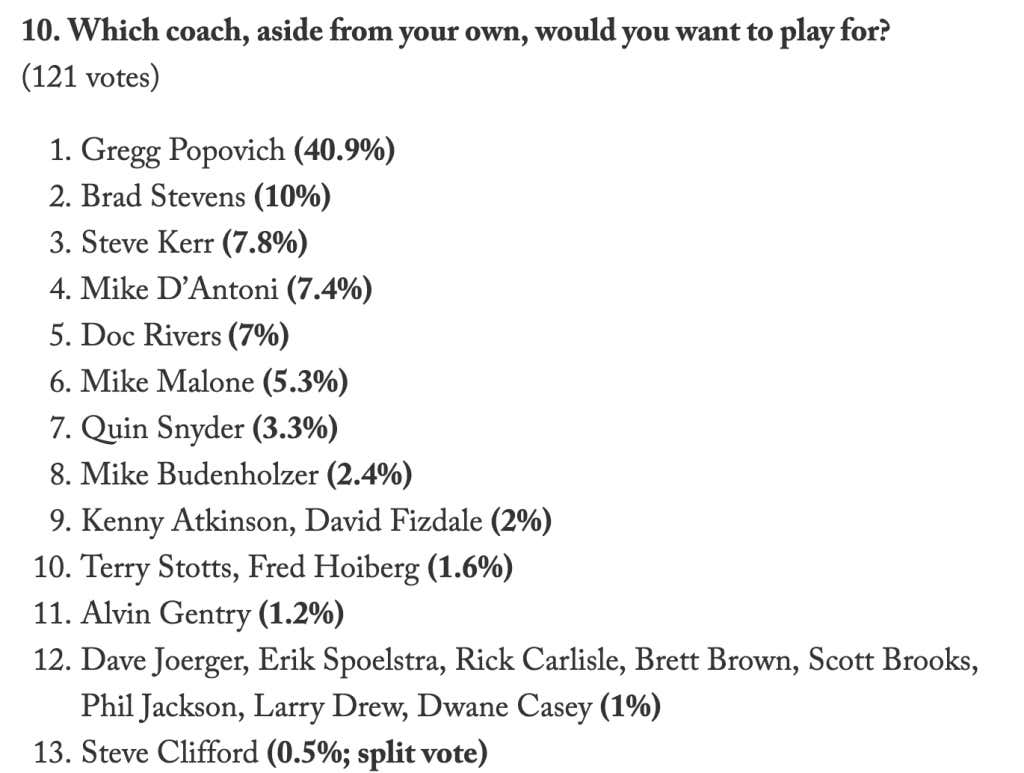 I wonder if Kyrie was asked this question and what his answer was. Interesting that both New York teams come in 9th, considering it’s being reported that everyone and their mother wants to go to either BKN or the NYK. Also hilarious that Phil Jackson got a vote, who does he coach for again?

Hilarious. Everyone hates Tony Brothers and Scott Foster just like us fans do. Maybe it’s because they’re shady as shit and the NBA clearly uses them to push a certain outcome. Everyone knows it and while the more fitting answer is probably #4, I don’t know how you could be surprised by the top 2 answers. Those guys STINK. 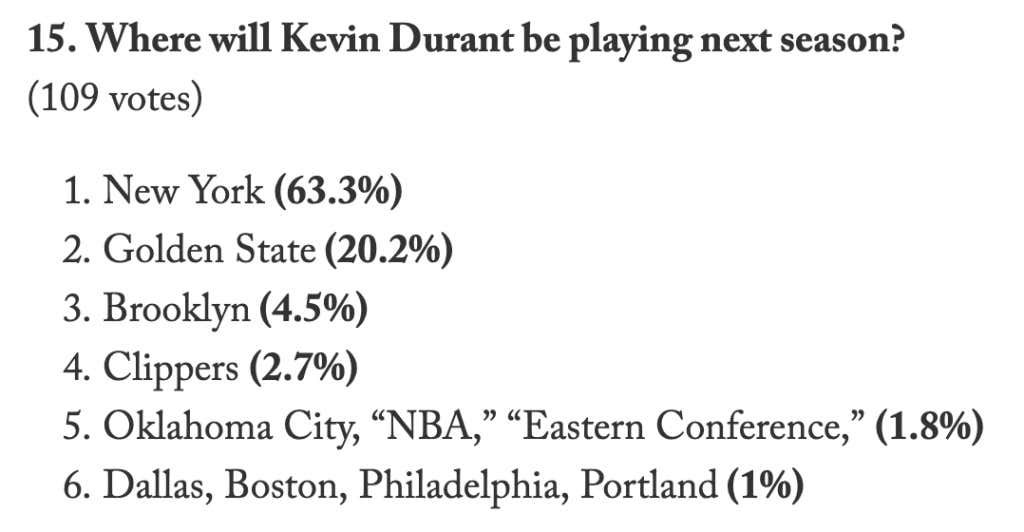 You know what they say, players talk. That is an overwhelming percentage right there that Durant ends up in NYC, and maybe that’s why Dolan sounded so confident about their summer a few weeks ago. Where there’s smoke there’s often fire, and it would be the most Knicks thing ever for there to be this overwhelming assumption that KD ends up a Knick only for him to end up somewhere else. Knicks fans are used to being cock teased I’m sure, but we’re reaching dangerous levels here. Imagine he turns them down and stays with GS? That first game at MSG would absolutely be must watch.

There’s a couple other interesting poll results, so go ahead and read through it, but to me these stood out the most.