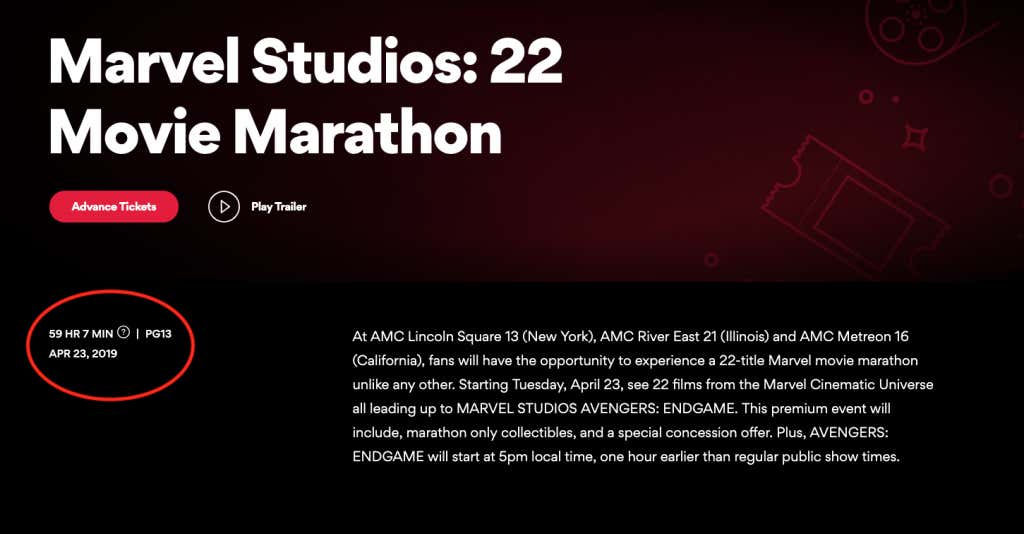 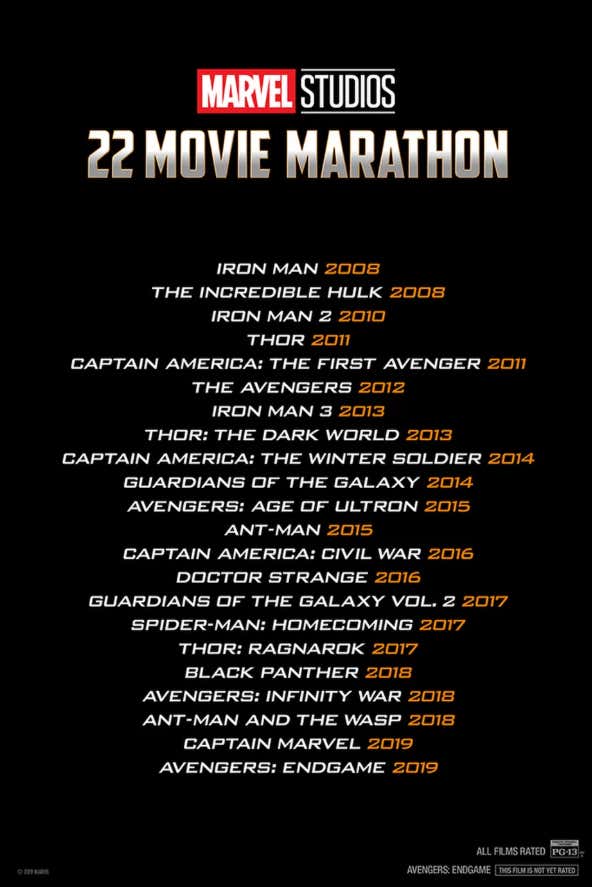 First of all, seeing a runtime of 2.5 days is flat out preposterous. It’s almost like someone at AMC put hours where minutes is supposed to be and minutes where seconds is supposed to be, which is something we would do here at Barstool. But if you want to be a supernerd in 2019, get your sleeping bag ready, because this is how you do it.

Everybody loves nerdy shit these days. The biggest TV show in the universe is a show about dragons, knights, and zombies while the most anticipated movie by a LONG SHOT is the dramatic conclusion of more than 20 comic books movies more than 10 years in the making. Normal people with lives, friends, athletic ability, and sexual partners are spending their free time looking up theories about Thrones and Avengers. So if you want to stand out as the Alpha Avenger fan, you have to pretty much subject yourself to life as a crafty homeless person that spends his days at the movie theater. I wrote this last year when AMC did a 31-hour marathon before Infinity War, which I thought was absolutely ridiculous:

Look, I love going to the movie theater. Out of everything I miss the most from my life before I became a parent, going to the movies is easily number 3 on my list behind sleeping 8 hours and having friends. Nothing beats the rush of going to the theater, getting hit in the face with the smell of fresh popcorn, sitting through a few awesome previews before they start to drag, forgetting what movie you are actually there to see, and then being reminded once it actually starts.
But you have to be an absolute savage to sit through a 31-hour movie marathon, no matter how good the Marvel movies have been. Going to the movies is fun, it is definitely one of those things that is good in small increments. Sitting in a movie seat, peeling your feet off of the sticky floor, or breathing the movie theater air is one of those things that should only be done for like 3 hours at a time, max. Once you hit the other side of that 180 minute mark, your body starts to break down like a 15 year NFL vet and breathing in 31 hours worth of stale air can’t be good for your lungs. I would say that sitting the dark for 1.5 days and staring at a screen can’t be good for your health either. But lets be honest. It’s 2018. We are all doing that shit every minute that we aren’t sleeping anyway.
The capper to all this is the food though. If you are in a movie theater, you know you are going to hammer the fuck out of some popcorn. You may dabble in some candy for fake “real” food that the theaters sell like hot dogs and pizza. But that popcorn smell when you walk in the theater is Pavlov’s bell for humans. It doesn’t matter if you haven’t eaten yet that day and know a large tub of corn will give you a massive case of Popcorn Belly. You are going to eat it. Multiply that by roughly 15 for this marathon since that’s the amount of movies you are sitting through, and you will likely be more popcorn than man by the time you leave the theater. Buckets on buckets on buckets. While I love this marathon in theory, in execution it has to be a real nightmare for the audience’s digestive systems as well as the short term and long term smell of whatever theater gets tabbed to host a bunch of people that look like Comic Book Guy for 31 hours.

Well now add a full 28 hours on top of that. One DAY and four hours more. I was scared about the state of my sore ass after it came out that Endgame was more than 2.5 hours long. Going to the theater for 2.5 days doesn’t even register as possibly in my brain. Sure you can sleep during some of the lamer movies and you can probably buy anything you forgot for only the typical 1000% movie theater markup. But the worst part of going would be the smell. I can feel my stomach turn just thinking about the stench of the theater and that’s coming from someone that has smelled the indescribable smell of a homeless person that has been on the subway for hours and may actually be dead. If you want to end this era of the MCU with a bang, go for it. But the phrase “Too much of a good thing” definitely applies here and you will almost definitely get the same feeling in your stomach every time you see/hear the MCU opening scroll that people who got sick drinking Rumple Minze get when they get a whiff of it at a bar.

Nonetheless, I cannot fucking WAIT until this movie comes out. Less than three weeks!

P.S. I wrote this blog mostly in hopes that Robbie or one of my other Marvel-loving coworkers would prove how much they love Marvel by signing up for this marathon since I can’t do it because of my dumb, stupid family. #BarstoolConfessions