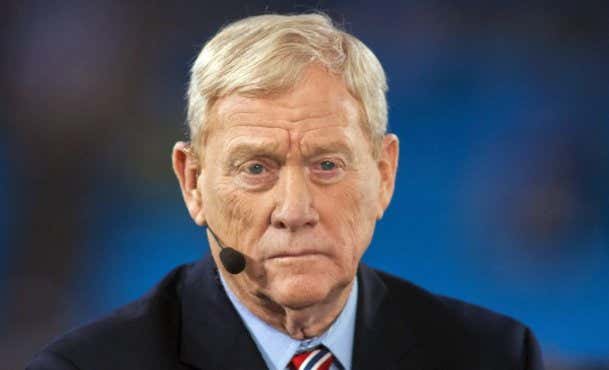 PFT – The Alliance of American Football has taken a lot of criticism in recent days. AAF co-founder Bill Polian admits some of that criticism is warranted.

Polian said on SiriusXM NFL Radio that there were a lot of problems that came up when AAF chairman Tom Dundon decided to pull the plug, and that they’re in the process of fixing those problems.

“We had lots of hiccups,” Polian said. “It came so quickly — some of it was a little bit expected but a lot of it was unacceptable. But we’ve rectified that and I’m glad to see that’s been done. Myself and many of the GMs, even though we’re not on the payroll, we’ve been working all day to try and rectify those problems.” …

Polian seems to be suggesting that Dundon is the one who dropped the ball, but it’s also fair to question why Polian and co-founder Charlie Ebersol didn’t have a better plan in place for the AAF, which needed Dundon to swoop in and save it early in the season, and then fell apart as soon as Dundon decided he had lost enough money.

It’s par for the course for Bill Polian to make himself out to be the hero of his own story. He’s been doing that ever since he fielded the worst team in football so Peyton Manning fell into his lap and has been revising history ever since. From using his spot on the Rules Committee to stop the way the Patriots were playing defense in 2003 to lying about having a 1st round grade on Tom Brady 15 years after the fact to claiming Jimmy Garoppolo was his second highest graded QB ever after only Manning, there is nothing this guy won’t do or say to make himself out to be the greatest football mind in the history of the human race.

But that doesn’t mean he can get away with painting himself as the victim of the cataclysmic failure of the AAF. He wasn’t a shift manager of the Radio Shack that got put out of business by Amazon and Best Buy. This was his league. Nothing was just sprung on him. He had all the inside info. He knew the data and the numbers. He knew this thing wasn’t viable.

One major issue was that Reggie Fowler, slated to be a $170 million investor in the AAF pulled back, committing only $28 million to the league and leaving the AAF in a lurch.

How was a league in this much trouble, this quickly, considering its early ratings were promising and people were excited? NFL insider Benjamin Allbright said on the radio show Pushing The Odds that the AAF wasn’t making any money off its broadcasts, no matter how many people were tuning in. Part of its partnership with CBS called for the AAF to provide CBS with programming, free of charge, for the first year. This was designed to be a proof of concept, engendering goodwill with broadcasters in the hopes of cashing in for the second season. This ensured the AAF would get plenty of exposure, but did nothing to actually keep the league afloat.

It’s here where billionaire Tom Dundon enters the picture … committing a reported $250 million to ensure operations could continue, but in reality only gave $70 million to the AAF and was operating on a weekly basis. The result of this investment was that Dundon became chairman of the board — and had full control of its future.

How dare Dundon only be willing to set fire to $70 million of his own money for a league with empty stadiums and no TV revenue? The unmitigated gall of the man. And before we congratulate Polian for his tireless effort to help the people left in the aforementioned lurch, keep this in mind:

So Polian not only opened that electronics store between the Hot Topic and Payless, he hired the staff, convinced them they’d be paid, promised to reimburse them for all hotel and medical expenses and stiffed all their suppliers. He started the business knowing full well they’d never be able to pay their bills. And now is so utterly without shame he’ll try to make the guy who lost 70 million bucks out to be the bad guy.

That is just the most Bill Polian thing Bill Polian has ever done. Imagine for a second how badly the AAF would’ve cratered if they didn’t have a Hall of Fame genius running things.