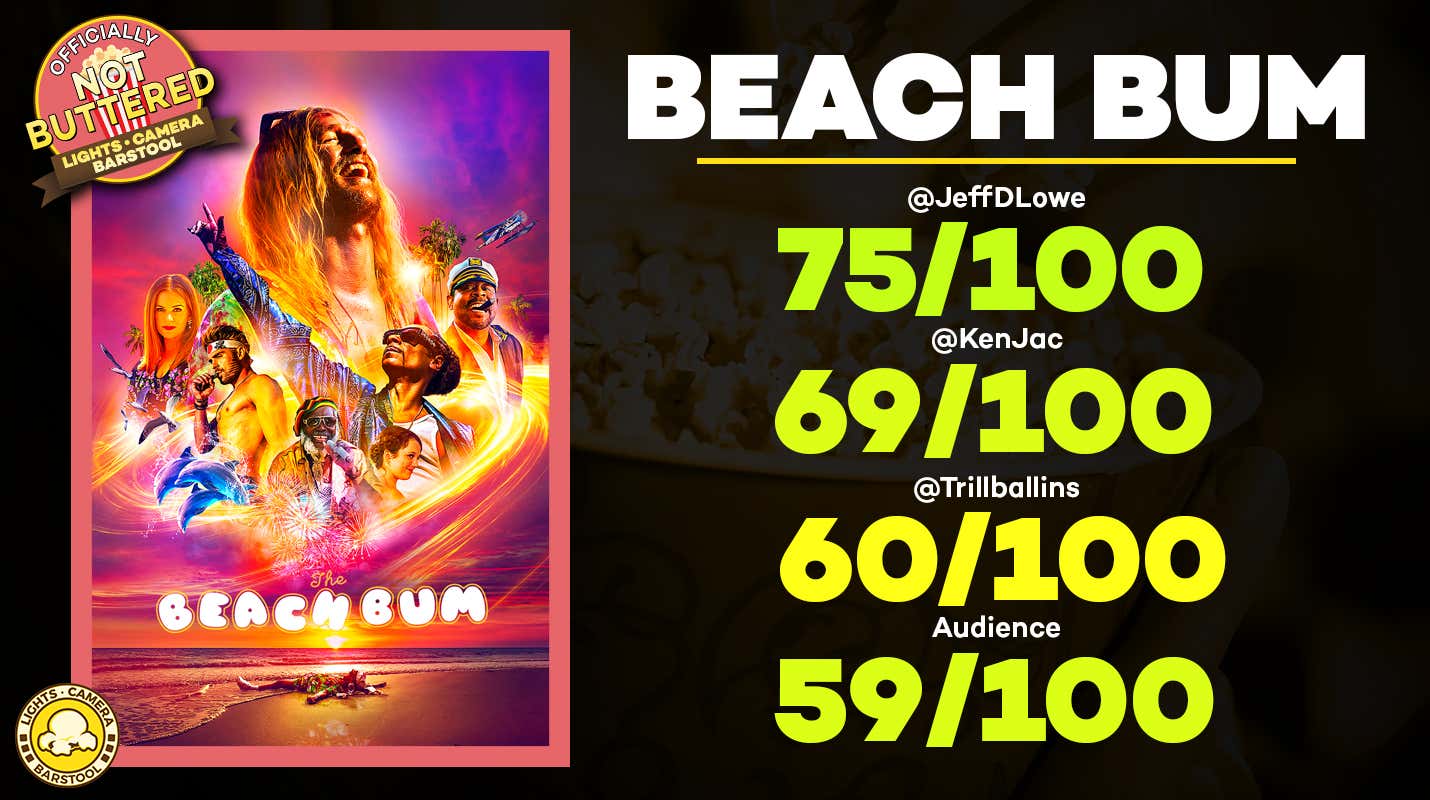 Jeff (75/100): ‘The Beach Bum’, carried by an outstanding performance from Matthew McConaughey, might be a classic bizarre entry from Harmony Korine, but is packed with a wildly entertaining story and fun ride from start to finish. This movie is aggressively not for everyone, but for those it appeals to, will likely have a good time.

This is the role that McConaughey was born to play. He won’t win any Oscars for it, and it might get lost in history as we get further and further away from release, but this role is a classic for the actor. He’s loose, easy going and free to really be that wild self we all love to reference when shouting “Alright, Alright, Alright!”

There are other actors with fun, albeit short, roles in the movie, including Zac Efron, Jimmy Buffett, Jonah Hill, Isla Fisher, and Martin Lawrence. One scene involves Efron playing music from a band that defines “1990’s music” that I absolutely loved. The legendary Snoop Dogg gets a ton of screen time and was a delight in his role. While the characters were all, for the most part, pretty crazy, the small tastes we get of each one of them helps in Korine’s ability to not overplay his hand with the script.

The movie is certainly not without its faults, as the story goes a bit too far and over-the-top in some areas. At tims some moments, bits or gags seemed a bit forced. It worked a lot better than Korine’s other movie in ‘Spring Breakers’, which felt forced and awkward from start to finish.

Is ‘The Beach Bum’ perfect? No. Some moviegoers might be turned off by the movie within the first few minutes. But as someone who went into this with major low expectations, I walked out surprised and wanting to even watch it again.

KenJac (69/100): “Alright, Alright, Alright” The Movie! This movie is a weird, off-putting and goofy slow burn, but I enjoyed it! It’s visually appealing with a perfect beach soundtrack, (some) good cameo roles and a truly irreverent plot. If you have time to kill or are high as hell, this is the film for you.

McConahey essentially plays a fan-made script version of himself that somehow worked perfectly. Moondog is the most ridiculous character that you just learn to accept as part of the movie along with his weird friends. The next biggest role came from Snoop Dogg as Lingerie, which was also a weird pseudo-parody of his real-life personality that just worked. I enjoyed Martin Lawrence as the inept Captain Wack, but I didn’t really understand the Zac Efron or Jonah Hill appearances. Their fit with their respective characters, or lack thereof, made me feel like Korine sent out the roles on a BCC list to every actor he was friends with and cast whoever responded. Folks, FOLKS! Can we talk about Isla Fisher still being the GOAT, though?

Like I mentioned before, it’s a crazy slow burn from a pacing standpoint. If you’re a patient person, that shouldn’t pose a problem. Conversely, I could see anyone who is impatient hating this top to bottom. I was pleasantly surprised with how beautifully it was shot, and the bright/colorful aesthetic Korine used. It actually made me want to visit Florida which is basically the biggest endorsement I can give this movie. It also made me want to drink PBR (I’m still not sure if the insane overexposure of the brand was product placement or not). Overall, you get a fun, but slow stoner comedy that doesn’t feel too full of itself. 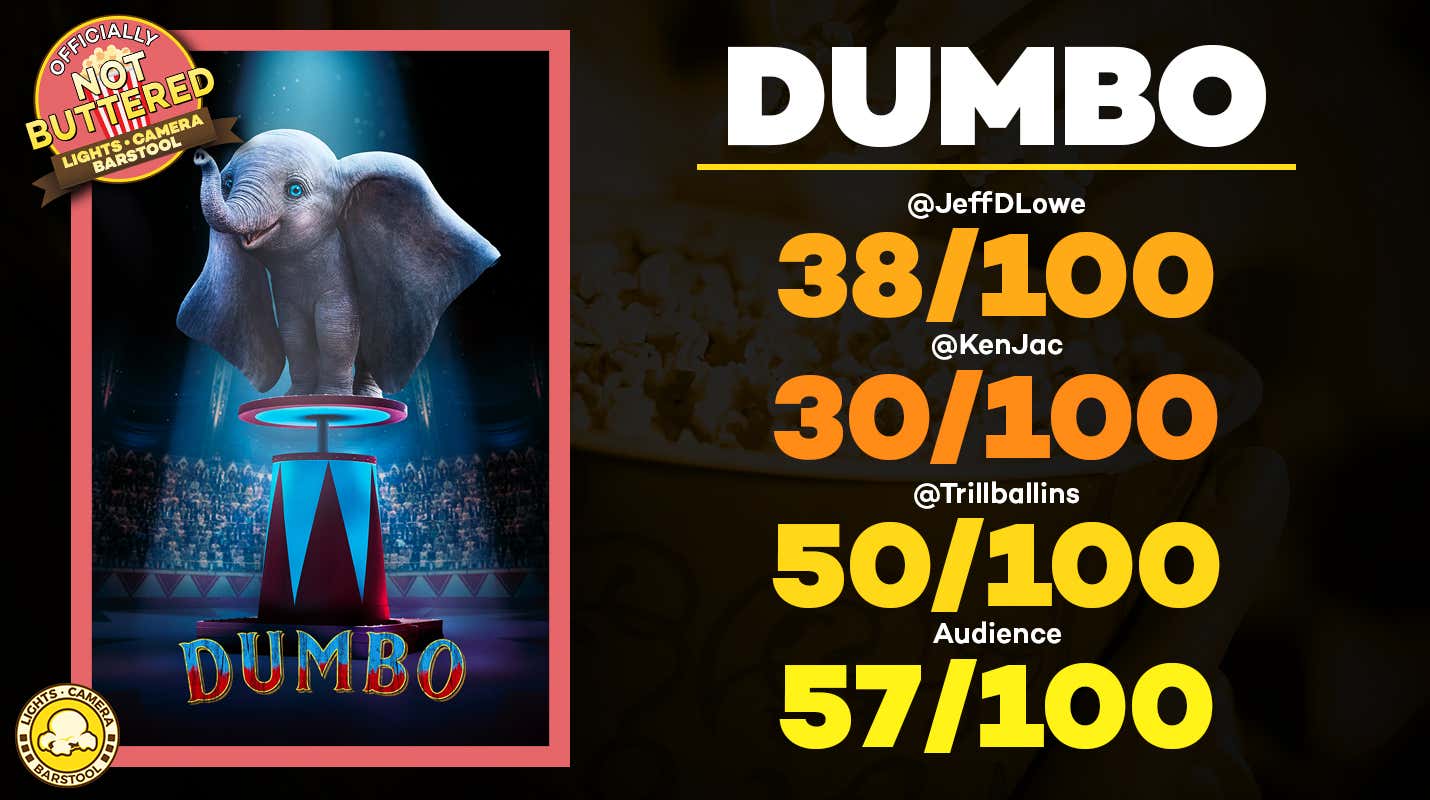 Jeff (38/100): Off-putting and at times unpleasant, ‘Dumbo’ is a rare “swing and a miss” for Disney with a weird mix of Tim Burton-isms and a bland paint-by-numbers studio-influenced style. The live-action revivals from Disney have ranged from “okay” to “very good,” but ‘Dumbo’ falls a bit farther down and doesn’t have the charm and heart you’d expect.

Let me be clear, I don’t know if there was a struggle between Burton and Disney, but it felt like there was at times. Producer Derek Frey has discussed that he told Disney they needed to trust Burton, which I believe. But Burton’s quotes during a studio visit lead me to believe he didn’t have the free-range ability to give the movie his usual twist and vision. Some scenes were cut together weirdly and jarringly jolted around in tone and storytelling. It was all just bizarre as to watch unfold and I don’t totally blame Burton for the finished product.

A lack of heart also plagued a movie packed with solid actors (Colin Farrell, Danny DeVito, Michael Keaton, and Evan Green). The fairly grim original movie was re-told in a much different manner with the live-action version and I didn’t have much of a problem with how it all played it out structurally. But the charm wasn’t there, and any uplifting energy was reserved for the few moments of Dumbo flying, which wasn’t enough to carry the movie.

While I didn’t expect this new telling of ‘Dumbo’ to blow everyone away, I certainly was thinking we would get a very solid. Not every Tim Burton does lands perfectly for the majority of moviegoers, but it was safe to assume he’d put his mark on this classic story. Unfortunately, what we got instead was a movie that in fact missed the mark and lacked any identity at all.

EDIT: The fourth wall break of Michael Buffer saying “ARE YOU READY FOR DUMBOOOOOO!” was so absurd.

KenJac (30/100): It’s a conflicted, dark and hollow reimagining of a story I don’t think a lot of people care about. People who loved Dumbo growing up are too busy posting impact font political memes on Facebook now to care, and a flying elephant just doesn’t draw in Gen Z like I think Disney imagined it would. What you get out of this movie is a decent, albeit overused lesson wrapped in a hollow package.

I don’t have a problem with any of the performances, in fact, I sort of dug Colin Ferrell’s Kentucky accent. Keaton and DeVito had a decent rapport as well, but the film just never found a good rhythm or clicked. Jeff and Trillballins both pointed out on the pod how it felt like Disney and Burton were at war over the final product and it turned into a by a committee-type project which is always a guaranteed flop in cinema. I’ll never be in the camp of “Stop making remakes and just make original projects!!!” camp of people, but this is definitely a valid example for them to pull from.

—
So both movies are Not Officially Buttered. Subscribe to Lights, Camera, Barstool where we reviewed the movies more in-depth. Also, remember to rate all 2019 and 2018 movies below.