Does anyone remember who Gandhi was?

Mahatma Gandhi was an activist who was the leader of the Indian independence movement against British colonial rule in the early 1900s.

His real name is Mohandas Karamchand Gandhi, but the widely used moniker of “Mahatma” was an honorific title bestowed upon him by the residents of Gurukul Kangadi.  Mahatma is actually a Sanskrit word meaning “high souled” or “venerable“.

— Similarly, my real name is Mike McCarthy, but “Large” is an honorific title bestowed upon me by an old friend of mine named Sam that is actually Gaelic for “obese” or “diabetic”. —

Employing nonviolent civil disobedience, Gandhi led India to independence and inspired movements for civil rights and freedom across the world.  He is one of the most widely revered figures of the 20th century, a peaceful protester who is often mentioned in the same breath as Nelson Mandela or Martin Luther King.

On January 30, 1948, at the age of 78, Gandhi was assassinated by 3 gunshots to the belly fired at point-blank range by a political rival named Nathuram Godse.  At the time, Gandhi was on his way to a prayer meeting in New Delhi, India.

— Speaking of New Delhi… I am in the market for a new Jewish deli.  I have been going to the same two or three spots for quite some time and could use some other options… Hit me up with any suggestions. —

Hollywood made a movie about Gandhi in 1982 that was lazily titled “Gandhi”, and the film won every major award that year, including the Oscar for Best Picture, Best Director (Richard Attenborough), Best Actor (Ben Kingsley), and somehow Best Costume Design even though the whole cast wore virtually nothing but different colored bedsheets and cheap glasses throughout the production. 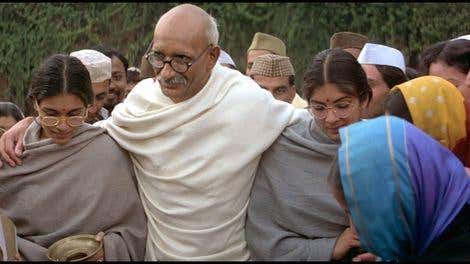 And they won that award over TRON!

But my real gripe (and the underlying reason for writing this blog) has nothing to do with the Academy and their overt bias towards Indian fashion in the early 1980s.  No.  I am writing this to let you all know a little fact about the man they called the Father Of A Nation that you may not already know.

Mahatma Gandhi was an asshole.

Typing that sentence automatically reminded me of the blog I wrote last year where I insinuated that Princess Di was a bit of a whore.

If you’d like to read that again, help yourself to this link…

But back to Gandhi… More specifically, what made him an asshole.

1. He didn’t hold certain black people in high regard. – During the two decades he spent in South Africa, Gandhi repeatedly expressed contempt for the native population, claiming they were no better than the “untouchables” of Indian society.

In 1896, he was quoted as referring to black South Africans as the “raw kaffir, whose occupation is hunting and whose sole ambition is to collect a certain number of cattle to buy a wife with, and then pass his life in indolence and nakedness.” I will not re-type the word I highlighted in that last quote but know that the k-word is oft looked upon as being worse than the n-word and Gandhi used the k-word more than once when referring to the blacks in South Africa.

There are a handful of other equally racist remarks to be found, and please feel free to Google the shit out of them.  But for now, I would like to move on to the sex part.

2. I call “BULLSHIT” on Gandhi’s commitment to celibacy. –  Mahatma fell victim to wet dreams, and would become incensed every time he suffered “involuntary discharges.” (great band name, by the way).  He was so eager to rid his body of its propensity to accidentally ejaculate that he took up the practice of sleeping naked, surrounded by nubile young women… Including his 18-year-old grandniece, Manu. 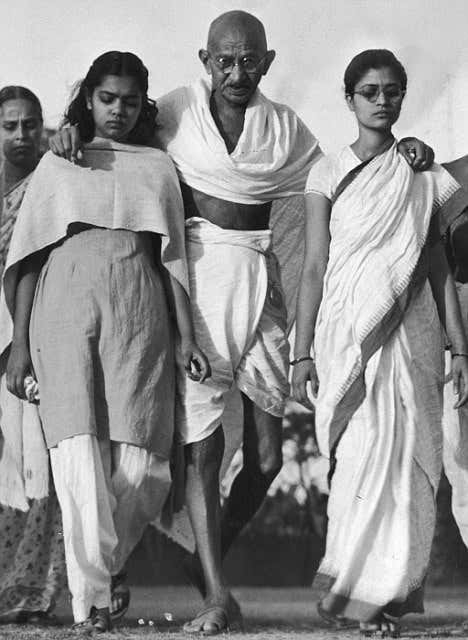 He would also take baths with young naked women, and receive massages from them… All of this wonderful shit was to test his Hindu vow of “brahmacharya“… Which invokes a spiritually focused life centered around celibacy.

– Here’s my own quick celibacy test…

If your willing to give Gandhi a pass on his decision to battle orgasms with nudity, then perhaps there have been other great men who recently have been wrongfully scorned for attempts to test their celibacy also…

3. He was a hypocrite, and not a good husband or father. – He refused to educate his sons, ordered them as young men to abstain from sex, and disowned the eldest, Harilal, for wanting to get married… That son eventually attacked Gandhi in print, converted to Islam, and died an alcoholic.

He once wrote about his illiterate wife – “I simply cannot bear to look at Ba’s (Kasturba Gandhi’s) face. The expression is often like that on the face of a meek cow and gives one the feeling as a cow occasionally does, that in her own dump manner she is saying something.”

(not sure why I used this GIF)

When his wife was sick with pneumonia, British doctors told Gandhi that a shot of penicillin would heal her, but Gandhi refused to have alien medicine injected into her body, and she died soon after.

Fast-forward to years later and Gandhi had become sick with malaria and, forgetting what he made his wife go through, allowed doctors to save his life with an equally-alien shot of Quinine.  He also allowed British doctors to perform an appendectomy on him which I assume involved some pretty alien shit as well. 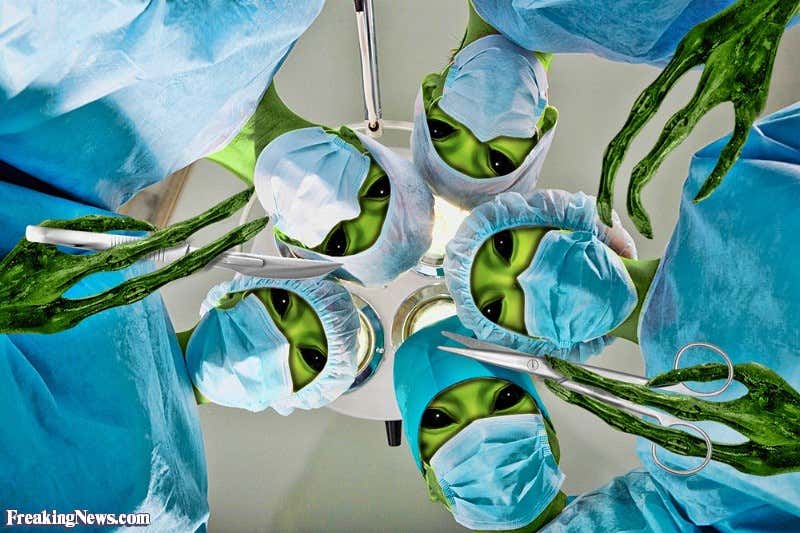 Does all this stuff I just gave you make Gandhi’s achievements any less relevant?… Not at all.

The reason I wrote this is because somewhere along the way, much like Princess Di, you are going to hear Gandhi’s name.

Maybe your kid will learn about him in school.

Maybe India’s fight for independence will come up in small-talk at the office water-cooler or some fucking random backyard barbecue.

My point is, however his name comes up, I want to put a little bullet in your conversational revolver that could potentially turn a Gandhi discussion on its ear… I don’t have much else, so shit like that makes me happy.

Have a good weekend.

*I don’t think that’s true about Momma T, but I’ll do some legwork. 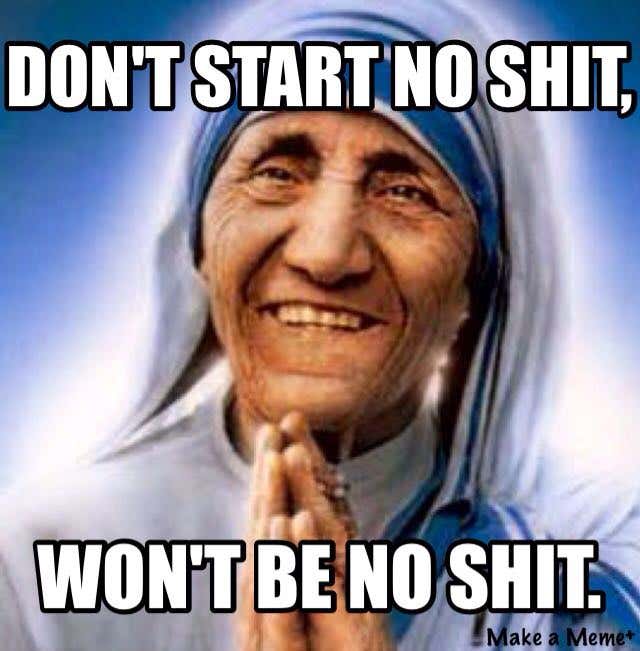 Next episode of EXTRA LARGE on BarstoolGOLD drops at 10 AM today, and me and my fellow co-hosts of Barstool Breakfast now do a bi-weekly video for GOLD called “Welcome On Back”… Check it out, if you have the means and/or desire to do so.

— Oh, and I had another Celibacy Test hanging around…