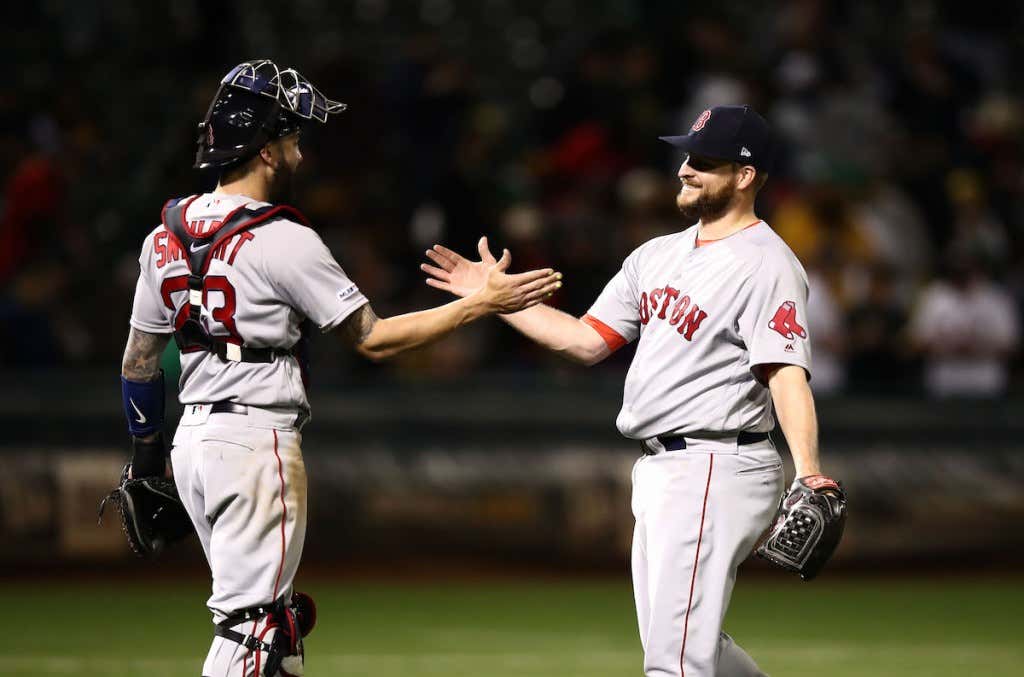 Well, I’ll be dipped in shit and rolled in breadcrumbs! We got some fuckin’ runs on the board out here in Oakland! And not only did the Red Sox score runs, plural, but they went on to win the whole damn game!

If you’re the type of baseball fan who checks in and out over the course of a 162-game season, that’s fine. Nothing wrong with that. But there are many of us who live and die on every single pitch for the entire season. We’re sick people. We know that. We also wouldn’t want it any other way. We don’t want a cure for this sickness, either. We just want to see our team win every single night. We know that’s impossible, but that’s the expectation in our sick, twisted little minds.

So, spare us the whole, “It’s the seventh game of the season, bro” stuff. Don’t care. A four-game losing streak? What’s that? The 2018 Red Sox did that zero times last year. Not familiar. Waiting damn near a whole week to see a win is like crawling through the desert with no water for twice the timespan. Gimme that dub and let me chug that shit. I’m dying over here.

Coming into Wednesday night, the Red Sox hadn’t won a game since last Friday, hadn’t scored a RUN in 22 and two thirds goddamn innings, and hadn’t had a lead in a game since the top of the third inning on Sunday. Every game felt like the same script being played out over and over again. I felt like I was losing my damn mind. In the third game of this four-game set, Nathan Eovaldi got the ball, escaped a bases loaded, nobody out situation by only giving up one run in the second, but then served up a two-run bomb to that motherfucker Ramon Laureano in the fourth. And I say that with respect because he’s so damn good.

A 3-0 deficit shouldn’t feel insurmountable, but it’s not exactly easy to feel optimistic about your team’s chances when they haven’t scored a single run since the Lord’s day. They needed all the Christ they could get in this one, and they finally got it when Blake Swihart snapped the scoreless streak with a solo home run in the top of the fifth. On his damn birthday.

The offensive drought was so bad that I almost would’ve been okay leaving the ballpark with a loss and a consolation prize of having actually scored a run. Call me pathetic, but that’s where I was at. Just a hopeless piece of shit wandering the streets of Oakland. Thankfully, the Red Sox scored more than one run. They actually tied the ballgame thanks to a bases loaded double by Mitch Moreland to drive in a pair of runs. You could legitimately make the case that the Red Sox would be winless on the season through seven games without Moreland. Guy picked right up where he left off in the World Series, ripping game-winning homers and game-tying two-baggers all over the place.

Still, my pessimism got the best of me. Tied at three entering the ninth inning, the Red Sox put two runners in scoring position and had Mookie Betts at the plate with two outs and a full count. Outside of that one homer he hit in Seattle, Mookie hasn’t really gotten it going just yet, so I was like, this is going to be one of those “we had ‘em” moments that we look back on after the A’s walk off in the bottom of the ninth or in extras. But then something happened. Something went the Red Sox’s way.

Mookie stings a grounder down the third baseline, but that’s where Matt Chapman hangs out. Oh, you’re not familiar? That glove of his ain’t gold, my man. It’s fucking PLATINUM. You hit a ball on the ground anywhere near this dude and you can mark it down as a whatever he chooses type-putout. The Baseball Gods decided that they were either done with or taking a break from torturing Red Sox fans, as the ball kicked off the third base bag, shot up in the air well above Chapman’s head and into left field, bringing in a pair of runs. It’s a miracle in Oakland.

Andrew Benintendi knocked in Mookie with an RBI, standup triple for good measure and things were feeling like the Red Sox of old again. That breath of fresh air, that drink of water in the desert. Felt really, really good. Ryan Brasier came on in the ninth and got all three outs unscathed to collect his first save. And if you’re wondering why Matt Barnes wasn’t called upon in the ninth as the presumed heir to Craig Kimbrel’s throne — well, that’s because he got Alex Cora four outs earlier in the night. One out to end the seventh — a Khris Davis swinging punchy — and three more outs to complete the eighth.

It was a good win. Wasn’t an easy win, but you knew it wouldn’t be after the way that this season has started out. Eduardo Rodriguez gets the ball in the series finale, who has historically pitched really well in Oakland. The lefty has a 1.69 ERA with 13 strikeouts in 16 innings over two starts at the Oakland Coliseum. If the Red Sox could get the hell out of northern California with a split in this series, then that would be quite impressive after getting blanked over the first two games.