The world awoke to some earth-shattering financial news this morning – no, the Dow didn’t crash (yet), no we’re not in a new Depression (yet), no the NYSE wasn’t invaded by a masked supervillain and his evil henchmen (yet).

Patagonia has taken a stand against branding Wall Street with their ubiquitous Power Vest.

Business bros be warned: A key part your workplace attire is in jeopardy of going extinct.

Patagonia, which has become a staple of the “Midtown Uniform” (slacks, a dress shirt and a fleece vest), is no longer in the business of branding Wall Street.

The American clothing company recently decided a requirement of new companies it works with will be that they align with Patagonia’s values of being environmentally conscious and prioritizing the planet.

…Kim told Business Insider she had reached out to a certified reseller of Patagonia apparel making branded clothing for a client. The reseller, which is required to get approval from Patagonia, told Kim it couldn’t fulfill the order because Patagonia was focusing on co-branding with “a small collection of like-minded and brand aligned areas”.

“Due to their environmental activism, they are reluctant to co-brand with oil, drilling, mining, dam construction, etc. companies that they view to be ecologically damaging,” the reseller told Kim via email, which she posted to Twitter. “This also includes any religious group/Churches, food groups, political affiliated companies/groups, financial institutions, and more.” [Business Insider]

You wanna talk about IRRESPONSIBLE, Patagonia?

How about stripping the finance world of their staple power outfit?  How about thrusting our entire economy into chaos? 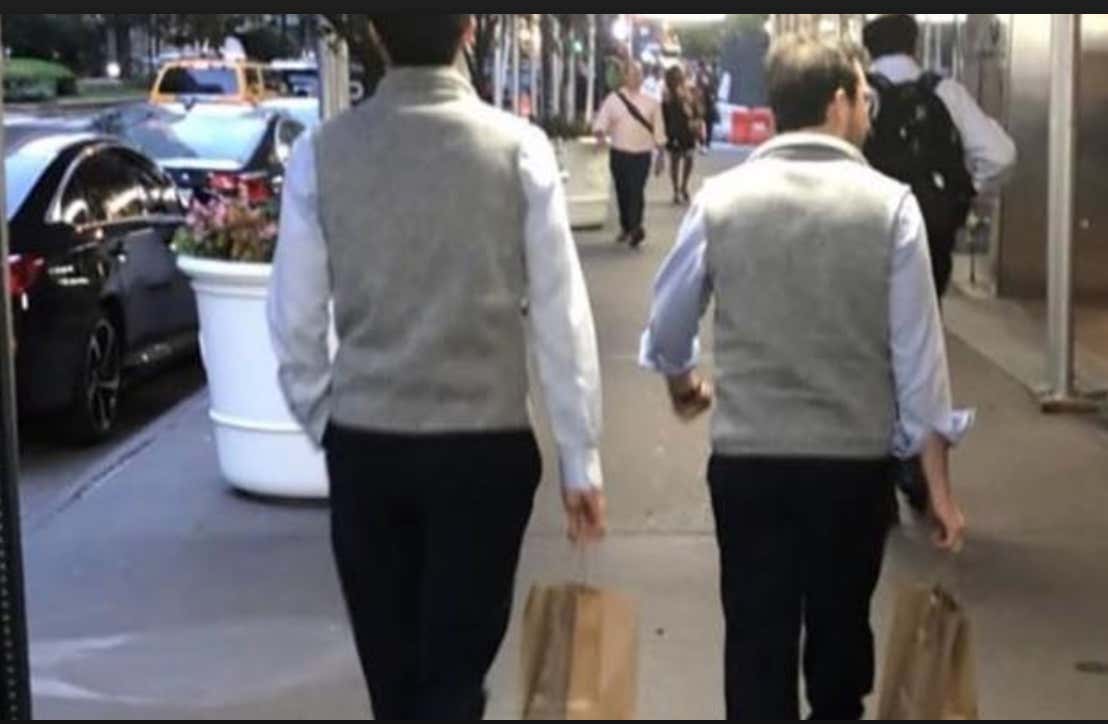 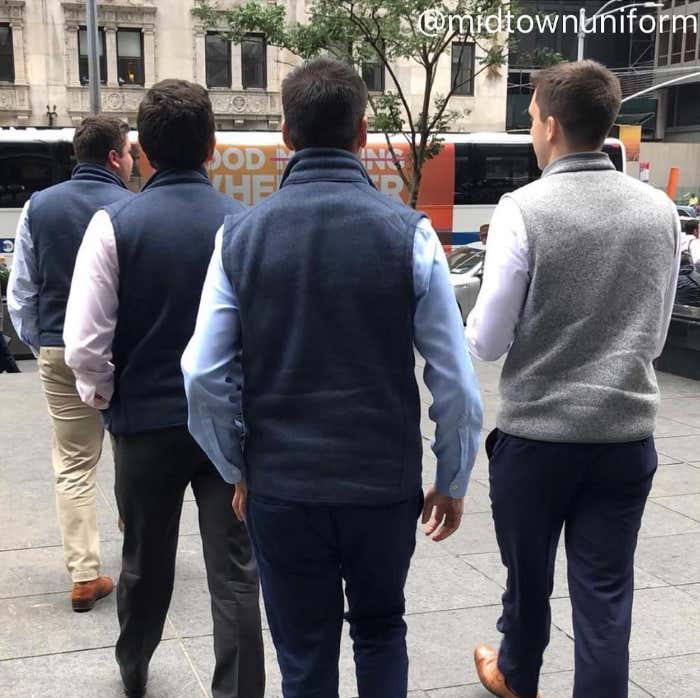 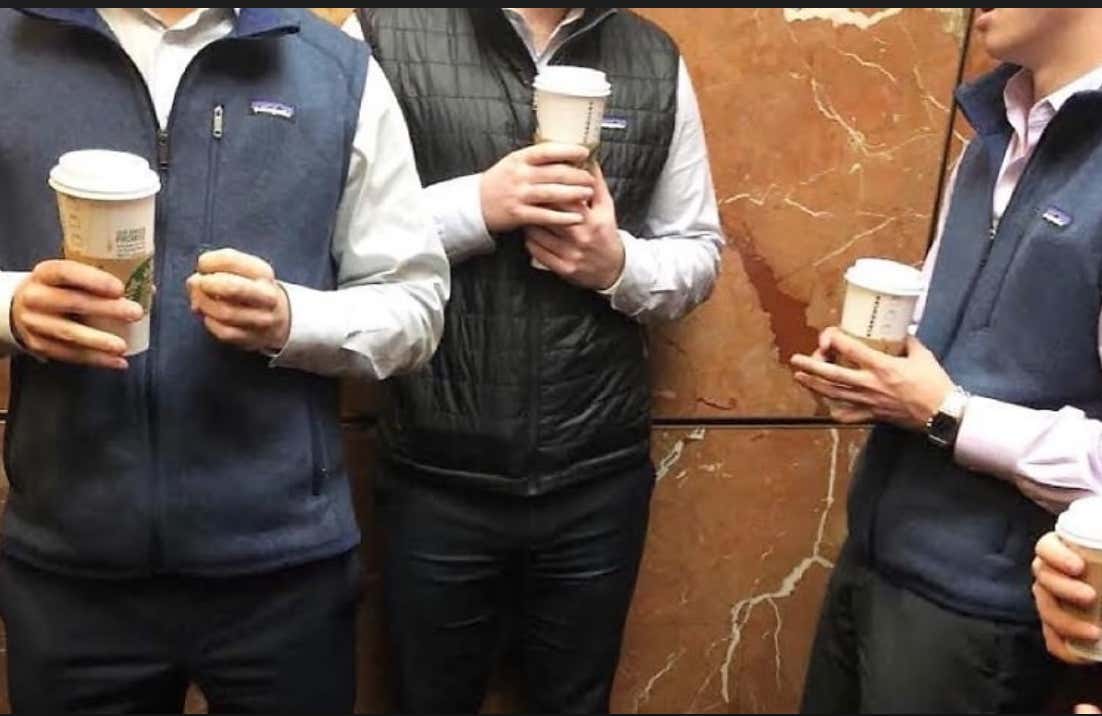 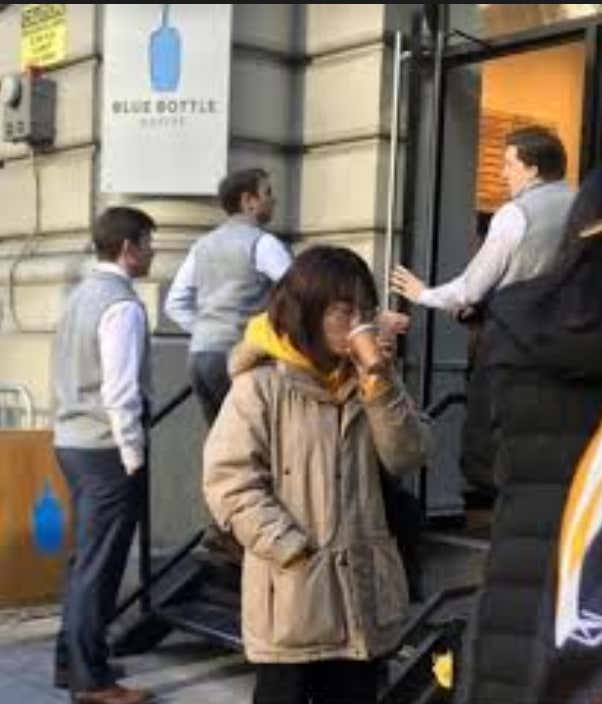 Look good, play good is a cliché for a reason – because it’s true.  It’s true across every professional spectrum, from NBA athletes to the lowly blogger (when I worked at home for 7 years, I would wake up, shower, and get dressed in real clothes – including shoes – just to get myself in the mindset that yes, I was a real person, working at a real job, trying to earn a real living.)  How you look may not define you, but it certainly defines your work performance.

People thought that Trump and the US/China Trade War and rising interest rates would be the crushing blow to our economy.  Who knew it would be those trail mix eating, rock climbing hippies at Patagonia?

Kim, president of the communications agency Vested (the reference is to the finance term, not the sleeveless layer), attempted to place an order for a client, something her firm had done in the past through a reseller for Patagonia’s corporate sales.

But she got back a rejection email from the reseller saying, “Patagonia has nothing against your client or the finance industry, it’s just not an area they are currently marketing through our co-brand division. While they have co-branded here in the past, the brand is really focused right now on only co-branding with a small collection of like-minded and brand aligned areas; outdoor sports that are relevant to the gear we design, regenerative organic farming, and environmental activism.” Patagonia, the person said, is “reluctant to co-brand with oil, drilling, dam construction, etc. companies that they view to be ecologically damaging” and while orders are approved on a case-by-case basis, this includes “financial institutions.” [BF News]

CFOs are already warning of an economic downturn coming sooner rather than later.  3/4ths of the top ones say we’re heading for a slowdown, and 15% say we’re looking at an outright recession. The Conference Board says CEOs view recession as “their biggest external concern” for 2019.

And now Patagonia is pouring gasoline onto the fire by stripping the biggest financial power players from their entire look.  You want to worry about the environment?  Well how about an environment where everybody is homeless without 2 nickels to rub together because the banks have run dry and our GDP has plummeted to $0 because 25-55 year old finance bros fell into such a deep depression they stopped going to work without the comfort of fleece warming 50% of their upper body, from the mid-torso to the neck, but not the arms?

Didn’t think about that did you.