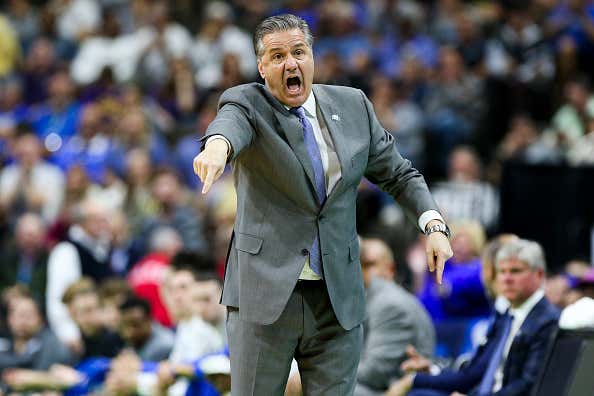 [Yahoo] - Early NCAA ousters did more to force Tubby Smith out at Kentucky than anything else. If Tubby was run off for losing as a No. 1 seed in 2003 and ’04 and missing the Final Four for nine straight seasons, then what happens in March should be the standard for all UK coaches.

So I’m not surprised by this take at all, especially where it came from. Kentucky fans have long had a thing with Pat Forde and his takes on Kentucky. The article itself wasn’t the worst. That is until the Tubby Smith line.

What in the living shit is this comparison? I legit read the article 3 times to make sure it wasn’t just a random thought or I was reading it right.

Tubby was at Kentucky for a decade. He won a title that first year, which I know everyone points to ‘Pitino’s players.’ But, he still won it. After that? Three Elite Eights and two more Sweet 16s. That’s fine and all. But, to say that’s comparable to Cal is outrageous. Cal has made 4 Final Fours. Tubby made 1. Cal has made 7 Elite Eights in 10 years. Tubby had 5 10 loss years in what a weaker SEC at the time. It’s not the same.

It wasn’t just the lack of Final Fours (1 in 10 years). Kentucky lost its edge under Tubby. I was there for the last two years of his career. He had talent. He had Rondo, Patrick Sparks, Joe Crawford, Randolph Morris, Jodie Meeks and Ramel Bradley over the last two years. It wasn’t like he was close either. Cal is legit 2 shots away from two more Final Fours. The Luke Maye shot and literally a free throw or made last possession against Auburn. Now, yes, you want to make a Final Four again, but it’s reasonable to see the differences here.