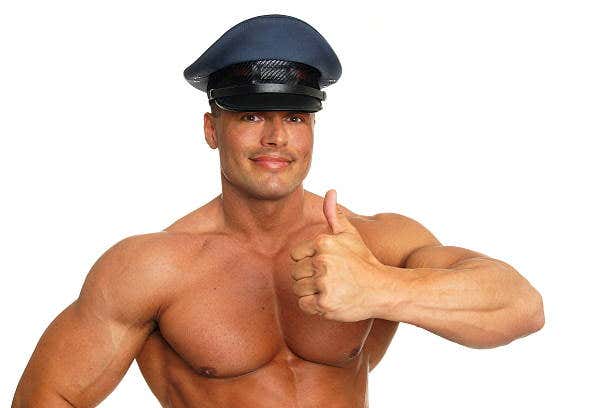 Yahoo – There’s no escape from the long arm of the law in Sweden. Not even sitting naked in a sauna.

Police spokewoman Carina Skagerlind says an off-duty police officer found himself sitting in the same sauna in Rinkeby, a Stockholm suburb, as a fugitive who had dodged a jail sentence for aggravated assault, among other offenses.

Skagerlind says after recognizing each other, “the naked police officer calmly told the man that he should consider himself arrested.”

She said Tuesday the officer called colleagues to pick up the fugitive, adding “the arrest was undramatic and the wanted man didn’t try to flee.”

I’m not gonna sit here and act like I can’t understand why some people break the law. I get it. There are people out there who just cannot abide by the rules of society. Whether it’s theft or assault or whatever. I don’t agree with it, obviously, but I’m not going to act like I can’t mentally comprehend what would drive somebody to ever break the law.

With that being said…

I cannot mentally comprehend what would drive somebody to ever break the law but then allow themselves to get arrested by a cop who has his dick and nuts out in a sauna.

BUDDY,,,,,, you’ve already broken the law. You already dodged jail once. Just fucking take off and see if you can dodge it again. What’s the worst that’s gonna happen? They’re going to arrest you? No shit. They’re arresting you right now anyway. Only this time, Officer Cock & Balls is tying your hands behind your back with his unit just flapping in the wind. At least if you take off and run there’s a chance that another cop, fully-clothed, will be there for backup and make the arrest. At least that way you’re not getting cuffed by a dude who is butt ass naked and sweaty from the sauna.

If you’re going to break the law, you gotta go all in. You have to be a full blown outlaw. Because if you’re not, there’s a chance that you’re going to bitch out and end up getting arrested by a man who is hanging full dong right in your face while reading you your Miranda rights. And as if that’s not punishment enough already, your next stop is a jail cell. Was the crime worth it? I don’t think any would be.

Sidenote: At least this happened in Sweden. I bet the cop was at least decently in shape. Could you imagine getting arrested by some fat greasy naked American cop? I guess if you’re going to get arrested by a naked man, it might as well be in Sweden.