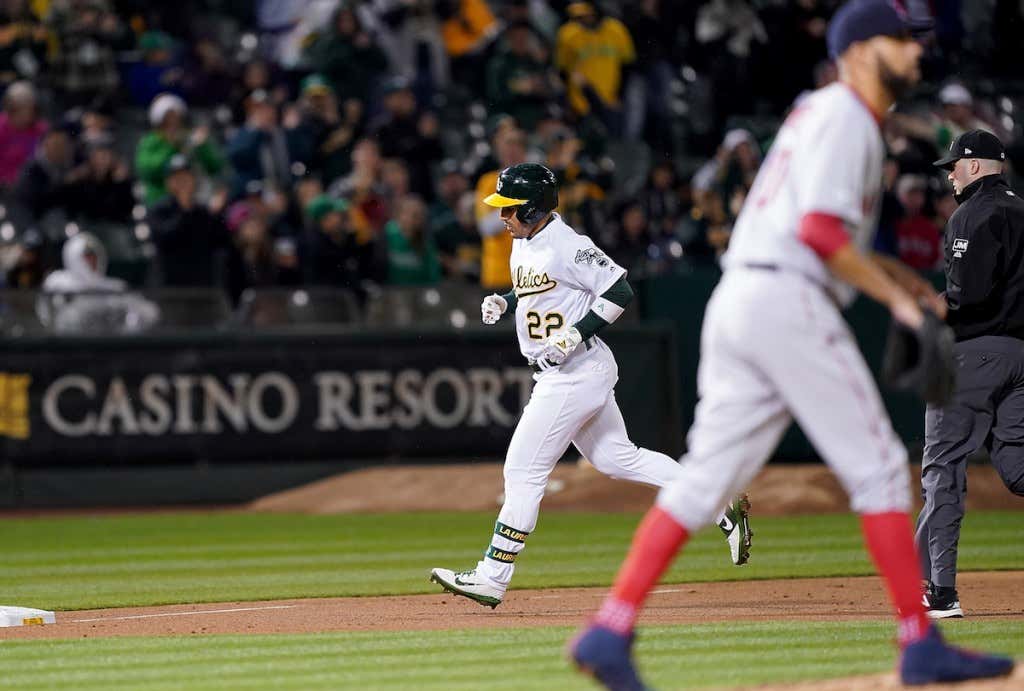 So, the Red Sox got their asses kicked in the series opener out here in Oakland and another Red Sox starter got their lunch handed to them. Wash, rinse, repeat.

A 1-4 record to start the season ain’t great. In fact, I believe I read somewhere that it’s the worst start in baseball history for a defending World Series champion. But let me make one thing clear — it mostly sucks because of the timing. Sucking in five straight games some time in June does not feel as bad as sucking in the first five games of the season. The 2018 Boston Red Sox had a stretch where they went 1-4, believe it or not, and I don’t even remember it. I will, however, remember this start to the season because it is really, really chapping my ass.

The focus will be on David Price and how he got taken deep three times, allowing four earned runs in six innings. In reality, he was actually one strike away from a pretty damn good outing. He went to 3-2 on Mark Cahna with two outs in the sixth, walked him and then gave up the two-run shot to Chad Pinder on a first-pitch changeup. Again, he was one strike away from finishing six innings of two-run ball with 10 strikeouts. Instead, we got what we got and then Heath Hembree gave up three runs of his own in the eighth for good measure.

If you’re keeping score at home, that’s 41 runs allowed in 41 innings for Red Sox pitchers thus far, 11 homers served up in 21 innings by the starters. For as bad as the pitching was yet again, the Red Sox bats went ice cold, getting blanked for the first time this season. The A’s bullpen is a nightmare, but the Red Sox were up against a starting pitcher in Aaron Brooks, who hasn’t pitched in a big league game since October 2, 2015. Tip your cap if you want, but there really aren’t any excuses for not lighting this guy up like a Christmas tree.

After announcing in October that Mookie Betts and Andrew Benintendi would be flip-flopped in the lineup, Alex Cora had Betts back in the leadoff spot on Monday night where he went 0-for-4 in front of Benintendi, who also went 0-for-4. Rafael Devers also went 0-for-3 and committed his third error in just five games. Eduardo Nunez hasn’t hit at all yet this year, and neither has Jackie Bradley Jr. or Christian Vazquez. Circling back to the pitching being the main focus of the Red Sox shit start to the season, it would be nice to see somebody other than JD Martinez or Mitch Moreland do something offensively.

It’s still early, yes. But this is not how a team with this much talent should play at any point in a season. They look underprepared, while their competition looks ready to kick their teeth in every night, quite simply unfazed and not the slightest bit intimidated that they’re playing the defending World Series champs. That’s now one complete turn through the rotation with one win to show for it, which is flat out unacceptable.

Time to panic? No. Time to get your shit together? Yeah, I’d say so.