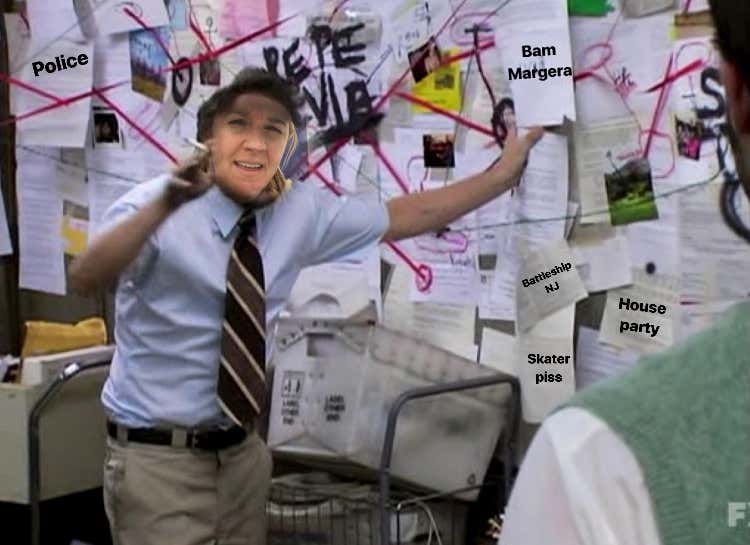 Welcome to the third part of my open-ended series on former pro-skater/Jackass’s Bam Margera, which quite frankly, has left me more mixed up than Charlie Kelly solving a mystery at the ‘ol cork board. This chapter has it all… Bam, battleships, biker gangs, and bad news…

I may not be winning that $100 for sitting in a hot tub full of skater piss now, and as I’ve been writing several big changes have taken place.

For quick background, my obsession started over a month ago as I detailed Bam’s struggle with addiction & his plan to host a massive April Fool’s Day party at his house (AKA Castle Bam) following a successful one he’d thrown in December 2018. This time around tickets were going between $100 – $500 for VIP.

I had a cameraman lined up & the ‘ok’ to go back to my home turf to document this spectacle, but an altercation in NYC & news that Margera had returned to rehab gave me pause. There was no way this party was still going to happen, and if he was getting help that was fine by me.

But each time I looked, the party was still in the works. The latest update on the party from the official Castle Bam Events site was 11 days ago & said,

On Sunday the Stage is being built so Skaters should show up on Monday from 2pm-5pm for Skate Session followed by the Movie Premiere , then Yelawolf!

Please bring a Copy of your receipt to show at gate check in.

VIP’s are welcome to attend both days and enjoy the property.

And then there was nothing until yesterday when this popped up… it would no longer be at his home:

LOCATION IS THE BATTLESHIP NEW JERSEY
If we can’t Party on my land, we will go to the SEA!

TODAY (SUNDAY) IS CANCELLED, POLICE ARE AT THE GATE AND NOT ALLOWING ANYONE TO ENTER.
WE APOLOGIZE FOR THE INCONVENIENCE AND ARE PURSUING OTHER ARRANGEMENTS AND WILL COMMUNICATE ANOTHER UPDATE ASAP.
THANK YOU!

Today (Monday – day of the party!) I still wasn’t sure what was happening, so I called the Battle Ship New Jersey (located about an hour from the original Castle Bam location, across the Delaware River from Philly in Camden, NJ). They informed me everything was cancelled and also posted it on Twitter, but when I asked for more details they directed me to speak with the Camden County Police Dept.

Camden Police Public Affairs then informed me that Margera’s team hadn’t completed any of the permits necessary to throw a large event, let alone one on a battleship. After asking them if they knew why the original event had been cancelled on Margera’s own property back in Pocopson Township, PA, I was sent through a few more sources.

Now, I couldn’t find anything backing this up, but one person told me ‘off the record’ that a main reason was that Bam’s security plan involved the Warlocks & Pagan biker gangs?? No April Fools joke, I was genuinely told that by a professional person.

And now, before publishing I went to check Bam’s instagram one more time and, lo & behold, the location has changed yet again. This time, he swears it’s set at Neshaminy Creek Brewing in Croydon, PA.

When I called the brewery there was a flurry of activity in the background. They’d just gotten out of a meeting where a logistics scramble was underway after a friend-of-a-friend-of-Bam’s type thing had taken place. Now they’re expected to host a party/Yelawolf concert in a matter of hours, while also worrying about not pissing off the neighbors in their small, tight knit community. Despite Bam confirming on his social media, the gent I spoke to on the phone said they could not 100% confirm this was happening yet.

In less than 24 hours this party has moved to two new locations over the span of 60 miles. With starting time listed as “sunset” that gives them a couple more hours to figure it out for those who have paid for those $100+ tickets. Interested to see how it turns out (because I’m weirdly, overly in to this whole saga now). 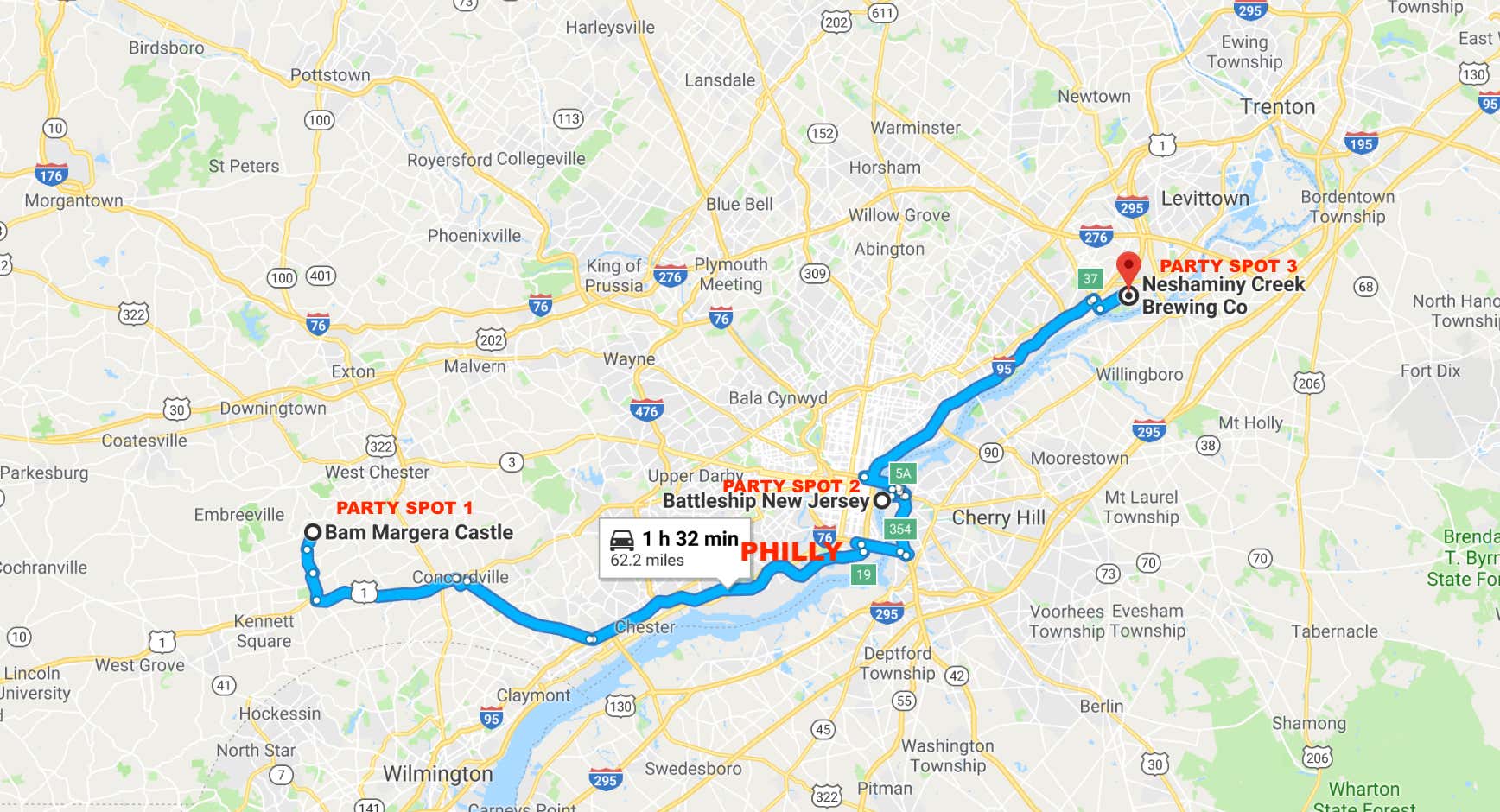 As a final side note that I felt the need to highlight, the website for this event (castlebamevents.com) is wonky at best, and I found a part that said it’s being run by Bam’s life coach who wrote the following:

Tim Zenhaling’s instagram is 99% him hitting things with a ‘Z Stick’ or twirling other types of sticks around & if you’re looking to kill some time I highly recommend checking his page out.

Every time I think the whole thing can’t get any stranger, it does. Stay tuned. Side note, the website still says the party’s on the Battleship New Jersey. Tim, put down the sticks & get cracking on these updates.