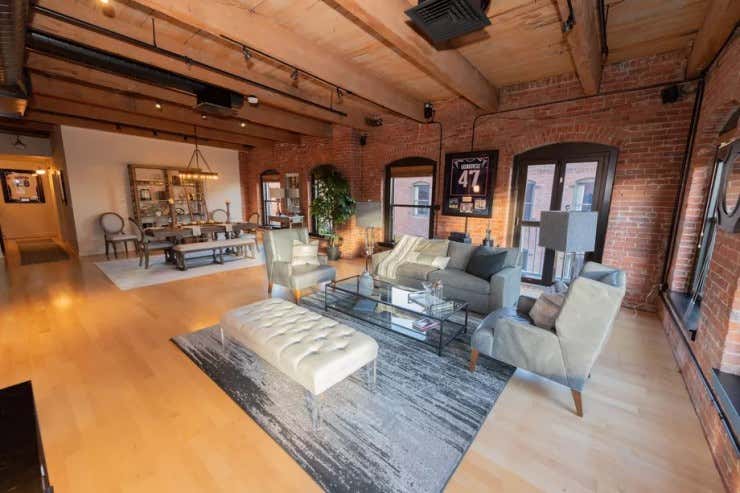 The 2,063-squrae-foot penthouse loft at 21 Wormwood Street in Fort Point is in contract to sell for $2.3 million, according to Douglas Elliman’ Sarkis Team, which listed it. It had been asking $2.375 million; and No. 87 bought the two-bedroom, two-bathroom spread with a 340-square-foot rooftop deck for $1.9 million nearly two years ago.

A Douglas Elliman spokeswoman declined to name the buyer, though the Globe is saying it’s an LLC connected to Gronk’s brother, Gordon Gronkowski.

Remember when the Patriots all got back from the Super Bowl in Minnesota and Rob Gronkowski found out his house got robbed of safes and guns?

What suprised me most at the time and has stuck with me ever since was the surprise not that Gronk was the victim of a break in, but that he had bought in a million dollar home in a nice neighborhood. Forgive me for stereotyping, but I just had always assumed that he was living in a two-bedroom with Goon furnished with nothing but a table for his TV and game system fashioned out of boards and cinder blocks, Bluetooth tower and a fridge stocked with nothing but Muscle Milk and a big bowl of Morning After Pills on the counter. But here is was, buying a quality piece of real estate in a nice suburb probably populated by old money, tech company owners and venture capitalists.

And now this? He puts a condo on the market and sells it in the span of like three weeks for a $400,000 profit. That’s more than 21% more than he paid for it. For an apartment that you wouldn’t want to ever want to see under blacklight because it probably looks like a Jackson Pollack painting from all the DNA and whose main decorative artwork is a framed Glenn Gronkowski jersey that might fetch 25 bucks at a Midget Hockey fundraiser silent auction.

On top of it, the Globe is claiming what? That the buyer is a dummy corporation run by Gordie Jr. or something? I saw “The Big Short” and, like everybody else, I don’t remember much more than Margot Robbie in a bubble bath. But I seem to recall that was exactly the kind of shenanigans being pulled by the people who really, truly understood what was going on in the markets. And not only were they getting filthy, never-have-to-work-again, retire-to-the-Caymans levels of rich, even the crooked ones never went to jail.

In no way am I suggesting Gronk is doing anything shady. My point is I think he might have been playing us all along. That he’s actually a real estate and finance genius hiding in plain sight disguised as a big, dumb jock who doesn’t understand money beyond the coins Mario jumps up to collect. So now he’s flipping luxury condos like a TLC host and laughing at all of us while his nine years of NFL salary just sits in an account untouched, accruing value. No wonder he retired. Now that the “making money off his name” portion of his life has begun, he can’t afford to play football. Fucking brilliant.