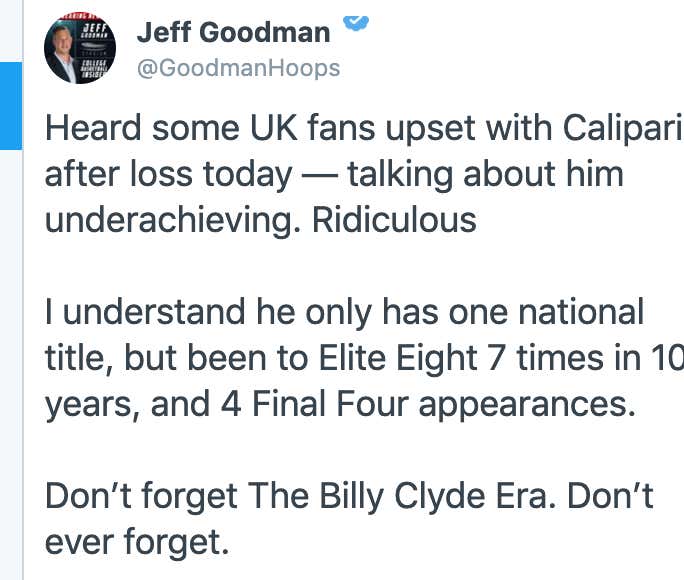 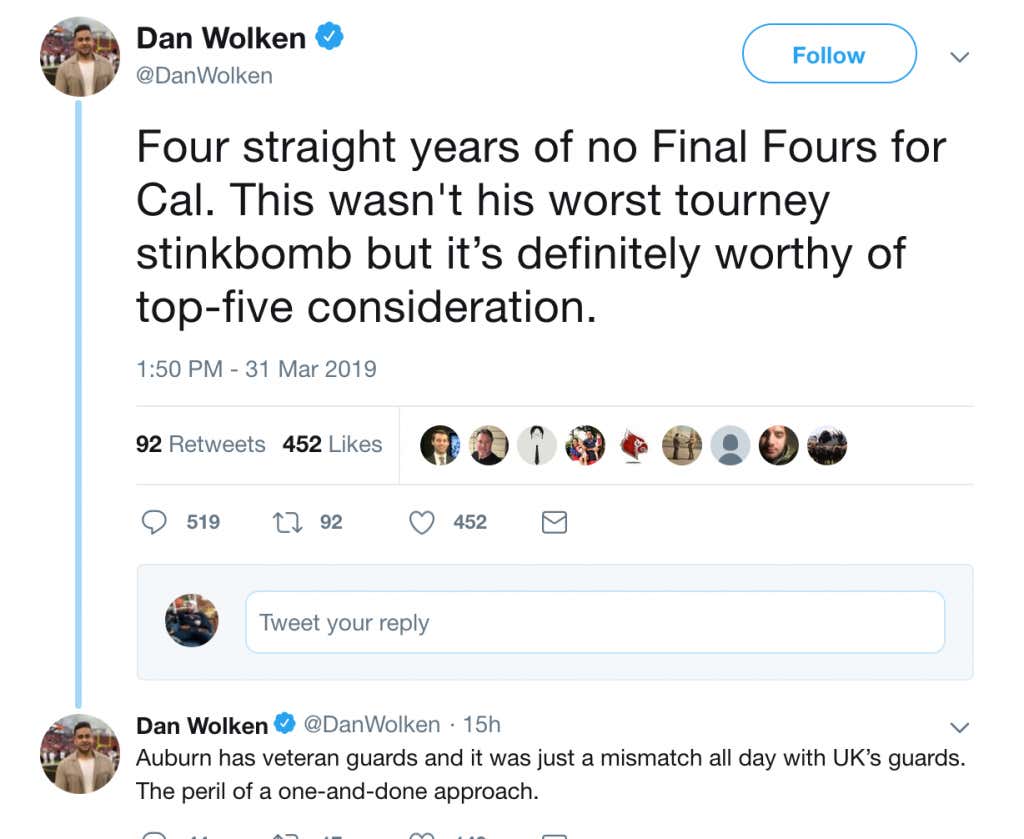 So, Kentucky lost. We all know that. But, what happens from here is morons tend to come out and start talking about getting rid of Coach Cal or how his approach doesn’t work. It’s always hilarious when it happens. Look at Dan Wolken’s last tweet. Auburn’s veteran guards were a mismatch and that’s a peril of a one and done approach? Must have missed the UNC game, with you know, a bunch of older guys. Weird how we didn’t bring that up.

Ultimately, yes, you can be upset at how the game went yesterday. It’s a loss that stings and fucking sucks. There’s no reason to lose that game to Auburn, especially the way the game started. You control them and run them off the 3pt line. You’re getting the ball to PJ Washington and getting buckets. You had a double digit lead.

But, how is it on Cal that Herro, Quickley and Hagans all struggled? He’s not out there turning the ball over. Hagans legit forgot to just how split a ball screen. He was dribbling it off of a guys foot. Quickley and Herro were missing wide open looks.

If you want to criticize Cal about not going small for a few minutes, fine. That’s one I get. Keldon Johnson was rebounding well enough that you could have slid him to the four. But, again, Quickley and Hagans weren’t exactly dominating to where you needed to have both out there.

But, to sit here and say you don’t want Cal or don’t want his approach is batshit crazy.

Look at that graph. Seems pretty good to me! Sure you want more than one title right now. But, we’re talking about a win and advance scenario. It’s not set up for the best team to win. And look at the losses since Cal last made the Final Four. You had the 2nd round loss to Indiana. After that? Luke Maye at the buzzer. The Sweet 16 to Kansas State where there was a bunch of missed free throws. Overtime to Auburn. They are literally two shots away from this being a non-narrative and just further proving how dumb it is to base everything on the NCAA Tournament.

Oh, for all this talk about Cal not making a Final Four since 2015, K hasn’t either. Wonder when we’ll got the hot takes about how the game has passed him by at Duke. It’s almost like he’s the one landing the better recruits and having all this talent and not making it. Weird.

Do you really want to move on from Cal? If you do, answer me this. Who do you want to hire and why? Tell me how you think that person will be better than Cal. I’ll bet you’re wrong.