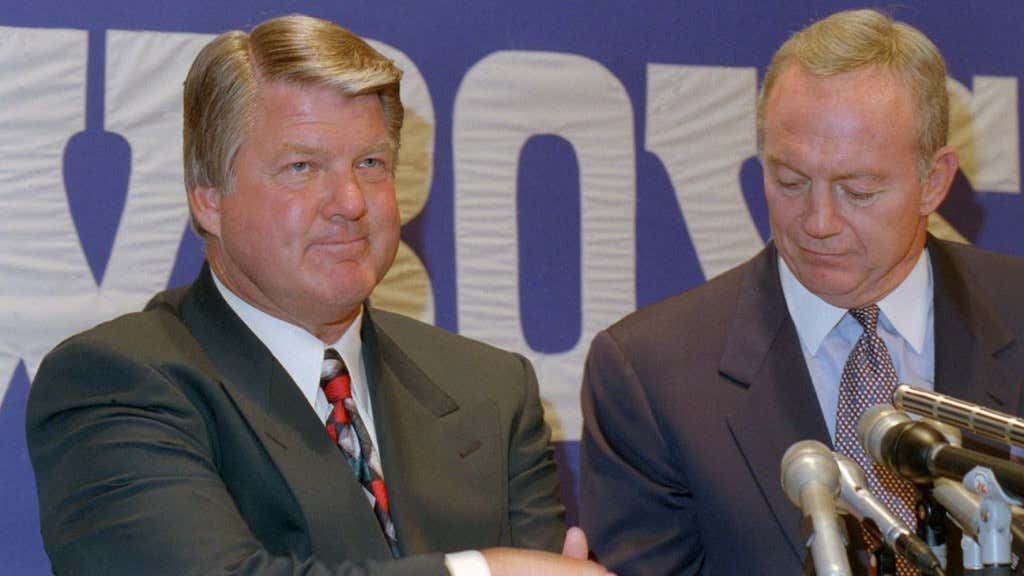 Big D turns in to divorce as a fight leads between Owner Jerry Jones and Coach Jimmy Johnson leads to a coaching change for the Dallas Cowboys. The fight started at a diner when Jones, claimed any coach could have won the last two Super Bowls with the Cowboys roster. This angered Johnson who built the team leading to him leaving with Barry Switzer taking his place.

When Jerry Jones purchased the Dallas Cowboys in 1989, his choice for coach was an easy one as he hired Jimmy Johnson a longtime friend, who was a teammate on the 1964 Arkansas National Championship Team. While Jimmy Johnson went on a long coaching career on the college level, Jerry Jones went into business and became a millionaire in real estate and the oil and gas industries. Johnson would eventually become the head coach of the University of Miami, winning a National Championship in 1987.

When Jerry Jones named Jimmy Johnson as the coach of the Cowboys the move was heavily criticized and unpopular as he dismissed Tom Landry who had been on the sideline in Dallas for the Cowboys entire 28-year history, winning two Lombardi trophies in five trips to the Super Bowl. Johnson knew hard decisions had to be made and traded Herschel Walker the team’s lone star to the Minnesota Vikings in a multiplayer deal. The trade left the Cowboys looking like an expansion team as they posted a record of 1-15.

The trade would pay dividends quickly as they got a cache of draft picks and began quickly to develop one of the most talented rosters in the NFL. In 1991, the Cowboys returned the playoffs after a six-year drought a year later they won the Super Bowl. With Troy Aikman, Emmett Smith and Michael Irvin leading the way the Cowboys became the envy of the league as they won a second straight Super Bowl in 1993.

With a young core of star players, the Cowboys looked poised to be a dynasty, when things began to unravel. The football and sports media heaped their praise on Jimmy Johnson, making the Cowboys owner somewhat jealous as he wanted to share the credit of the Cowboys success. This led Jerry Jones to make the comment that any coach could have led Dallas to two straight Super Bowl titles. The fight ended a long 20-year friendship, as Jimmy Johnson stepped down as coach of the Cowboys with a two-million-dollar buyout.

To further anger, Jimmy Johnson, Jerry Jones named Barry Switzer another former teammate at Arkansas as the new coach of the Cowboys. Switzer and Johnson had a long heated rivalry that was stoked when Jimmy Johnson coached at Oklahoma State and Switzer at Oklahoma. In 1994, the Cowboys went to the NFC Championship Game but lost to the San Francisco 49ers. A year later they would become the first team to win three Lombardi Trophies in four years. However, Switzer had won with Johnson’s players and never achieved the same success. The Cowboys have now been to the NFC Championship since, as they have been a constant underperformer come the postseason.

Jimmy Johnson after two years working on Fox, returned to the NFL as the coach of the Miami Dolphins, replacing another legendary longtime coach in Don Shula. Johnson could not repeat the success he had in Dallas, though he was able to lead Miami to the playoffs in three of four seasons at the helm.