Source -  For weeks now, Operation Varsity Blues has served as a beacon of Schadenfreude for those of us who had to get into college the fair and just way: with exceptional grades, ambition, and offering our dignity and future fiscal stability to the financial aid gods as proper sacrifices.

Over the weekend, Dr. Dre posted a picture on Instagram of himself and his daughter, Truly Young, with what appears to be a welcome packet from USC, the university at the center of the major admissions scandal that broke March 12. Underneath the photo the music mogul and proud father added the caption: “My daughter got accepted into USC all on her own. No jail time!!!” 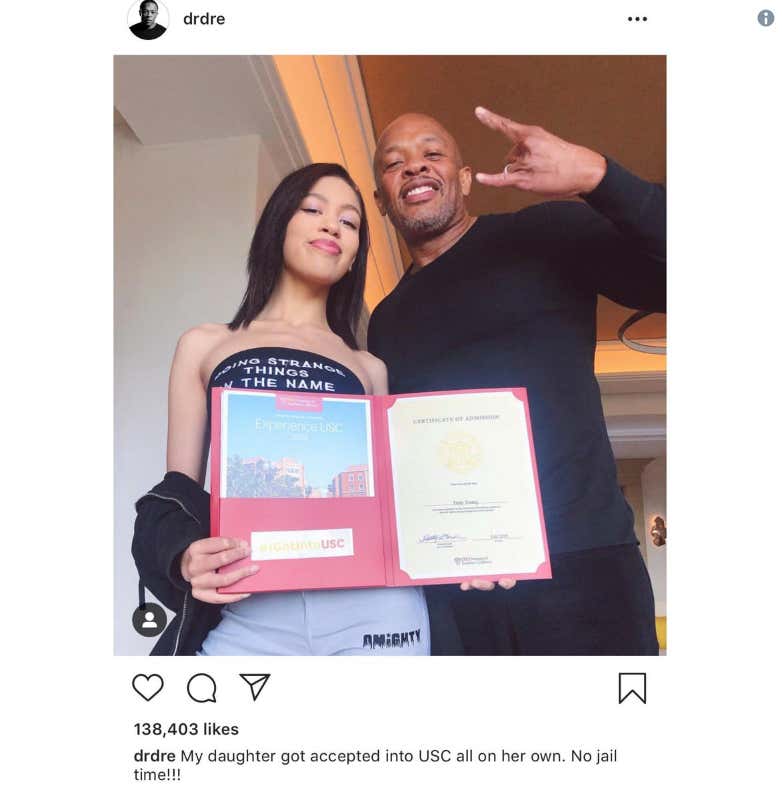 He was allowed a few seconds to warmly chuckle to himself before the internet swiftly accessed its long memory to remind him that he, too, made a shared $70 million donation to same university.

In 2013, Dre and fellow producer Jimmy Iovine gifted the university the whopping donation to form the USC Jimmy Iovine and Andre Young Academy for Arts, Technology, and the Business of Innovation.

Seventy MILLION dollars. SEVENTY MILLION DOLLARS given as a gift to a university that he didn’t even attend. I don’t care what the tax write-off implications are, my mind simply cannot comprehend that level of fuck you money. I guess when you’re worth $850 million it’s a drop in the bucket but still, what a preposterous sum of money to donate.

The funny part is, he probably forgot he donated the money in the first place. Why else would he put that up on Instagram? It’s not like he’s ever bragged about it. Most people didn’t even know he made the donation- it was touched upon briefly in The Defiant Ones but was never made into a big thing. Besides, technically his daughter did get into the school legally. He didn’t alter test scores or fake athletic prowess- he donated money to the school. That’s it. Now, that’s not to say that there wasn’t an asterisk next to the Truly Young application, but it is worth noting that Dre played by the rules. And let’s be honest, even if he didn’t donate the money his daughter was getting in anyway. Her dad is Dr. Fucking Dre. and she’s going to school in California.

If I were him, I would’ve never removed the post in the first place. Once it’s up the damage is done. You have to live with the fact that people are going to get upset with you no matter what you do because you’re rich and famous and they’re not. It’s a damn shame. Things just ain’t the same for gangsters.