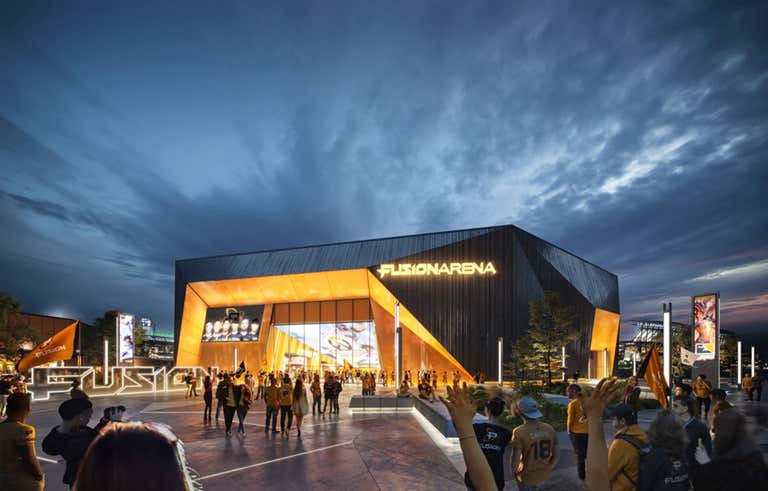 Sports Business Daily – Comcast Spectacor and The Cordish Cos. are building a $50 million, 3,500-seat esports arena in Philadelphia.

The Fusion Arena will be next to Wells Fargo Center, Lincoln Financial Field, Citizens Bank Park and the mixed-use Xfinity Live development.

“We’re thrilled to introduce a venue like no other as we move forward with the next phase of development within the Philadelphia Sports Complex,” said Dave Scott, Comcast Spectacor’s chairman and CEO.

Xfinity Live is also a joint venture between Comcast Spectacor and Cordish, which specializes in real estate developments around stadiums and arenas…Construction will start this summer on a site currently used as a parking lot and the venue is scheduled to open in 2021. The Fusion facility will have a 10,000-square-foot esports training facility as well as two balcony bars, a broadcast studio and premium boxes and suites.

There’s only a handful of cities in North America which have teams in all four of the major league sports. Boston, Chicago, Dallas, Denver, Detroit, LA, Miami, Minneapolis, New York, Philly, Phoenix (kind of), the Bay Area and Washington DC.

Eagles, Sixers, Phillies, Flyers, Union, Wings, Soul, Freedoms, Fusion. Name another city with 9 professional sports teams in 9 professional sports leagues right now. Oh that’s right, you can’t. Because Philly is the greatest sports city in the world and we’re only continuing our dominance in the future. That starts with the Philadelphia Fusion getting their own $50 million eSports arena in 2021.

Now the one downside here is that this would definitely explain why my Xfinity bill has been skyrocketing each month. But the Sports Complex in South Philadelphia is pretty much going to be a sports fan’s version of Disney World once this is completed. You’ll have players like Joel Embiid, Ben Simmons and Carter Hart all hitting their prime in a newly renovated Wells Fargo Center for the Sixers, Flyers, Wings and Soul. You’ll have Lincoln Financial Field for Carson Wentz and the Super Bowl Champion Eagles. Citizens Bank Park for Bryce Harper and the Phillies. A new eSports Arena. You’ll have Xfinity Live for all your sports bar needs. And I’m pretty sure there’s going to be a new office buildings/hotel right there in the Sports Complex as well coming soon. Pretty sure a casino is on the way soon as well. And all of it is within a nice little .5 mile x .5 mile loop.

P.S. – I desperately want to play NHL Hitz 2002 in the new arena. I don’t know jack shit about Overwatch. But Hitz 2002 was the last video game I was really good at so hopefully they start up a new league for that.