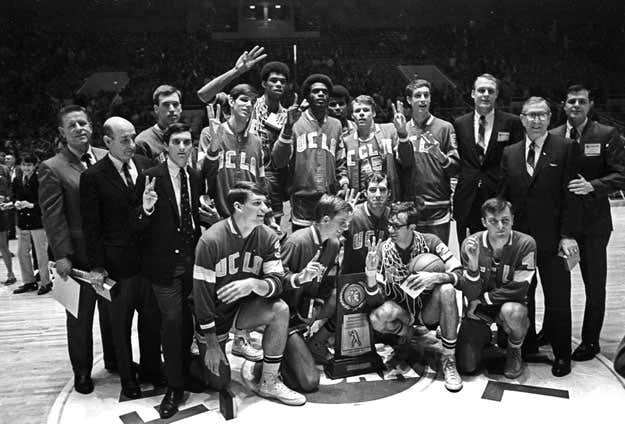 Lew Alcindor wraps up his dominant NCAA career, winning a third straight National Championship as he is named Most Outstanding Player for the third straight tournament. It’s the fifth championship in six years for UCLA, who beats Purdue 92-72 in the championship game in Louisville. In three years at UCLA, the Bruins posted a record of 88-2 with Lew Alcindor, who later became Kareem Abdul-Jabbar and won six NBA MVP awards.

Kareem Abdul-Jabbar was born Lew Alcindor in New York City on April 16, 1947. A man among boys, Alcindor was the most dominant player ever seen on the New York schoolyards. A highly sought-after recruit, Lew Alcindor chose to attend UCLA, who had won the NCAA Tournament in 1964 and 1965 under Coach John Wooden. Unable to play in 1966, due to an NCAA rule that barred freshman from playing varsity, he led the UCLA freshmen to victory over the UCLA varsity in a scrimmage game at Pauley Pavilion.

Upon getting clearance to play, Lew Alcindor showed his dominance right away. His size and ability became so much, that the NCAA banned the slam dunk after 1967 due to Alcindor’s presence in the middle. That year saw UCLA go 30-0 and win their third National Championship. In 1968, UCLA suffered a loss to Houston in what some called the game of the century. The Bruins would avenge that loss in National Championship Game. By Lew Alcindor’s senior season, he had converted to Islam and turned down a chance to play in the 1968 Olympics. Again, UCLA dominated, losing just the final game of the regular season to arch-rival USC, going 25-1.

The Bruins road to the Final Four began with a 53-38 win over New Mexico State in the Western Regional Semifinals followed by a 90-52 win over Santa Clara in the Regional Finals both games were played on the campus of UCLA. Joining UCLA in the Final Four at Louisville were North Carolina, Purdue, and Drake. The Tar Heel reached Louisville with hard-fought wins over Duquesne (79-78) and Davidson (87-85). Purdue came out of the Mideast Region with a 91-71 win over Miami-Ohio and a 75-73 win over Marquette. Drake came out of the Midwest by beating Texas A&M 81-63 and Colorado State 84-77.

In the Semifinals, Purdue slammed North Carolina 92-65, while UCLA had its hands full with Drake, winning 85-82 as John Valley led the way with 29 points for the Bruins. This set up a unique final personally for Bruins coach John Wooden who played for Purdue four decades earlier. Wooden had once thought about leaving Westwood to lead his alma mater but stayed as a course of full filling his contract. Instead, it was George King leading the Boilermakers into the title game.

In many ways, the championship game was a coronation for Lew Alcindor, as UCLA raced out to a 42-31 lead at the half and won the game 92-72. In his final college game, Alcindor was at his best scoring 37 points with 20 rebounds to win the Most Outstanding Player for the NCAA Tournament for the third straight season, a record unlikely to ever be approached. UCLA controlled the boards in a big way as Curtis Rowe added 12 rebounds and Lynn Shackelford had nine. Purdue meanwhile was led by Rick Mount who had 28 points.
Lew Alcindor would go on to become the first overall pick in the NBA Draft by the Milwaukee Bucks. He would win the Rookie of the Year that first season and won the MVP while leading the Bucks a third-year expansion team to an NBA Championship in 1971. Changing his name to Kareem Abdul-Jabbar, he would win five more MVP awards, five more championships for the Los Angeles Lakers, while becoming the NBA’s All-Time leading scorer in a 20-year career.