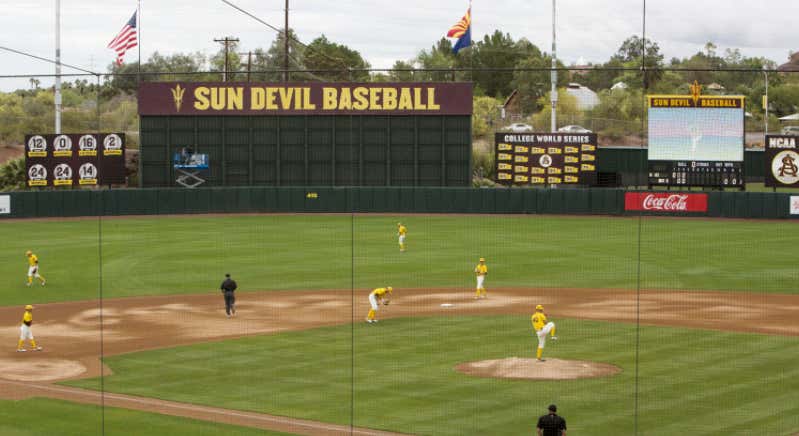 Ask and ye’ shall receive, coach.

Look, 19-0 is amazing any way you slice it.  It’s the 3rd best start in ASU history.  The Sun Devils are playing good, clean baseball right now and as of this blog, are ranked 19th in the country.  As soon as the polls come out later today, we’d have to imagine they’re making a bee line to the top 10.

But my question right now is, can they sustain this pace?  Now obviously there will be a handful of losses over the course of the season.  No such thing as undefeated in baseball.

That’s a tough pace to keep up.  Now that’s not to say they’re not dominating, because they obviously are, but history shows that they could be in line for some regression.  And that’s my job as an independent journalist who covers ASU baseball – to show that a handful of losses could be right around the corner.

That’s fine though.  Again, losses happen in baseball.  It’s not if you lose, it’s when you lose and how you rebound from the loss to win the next game.  The old baseball adage runs true for even the college game that “an offense is only as hot as the next day’s starting pitcher” and the Sun Devil’s starting pitchers are dominant right now

And it starts with Alec Marsh, Jr. RHP of Milwaukee, WI

We’ll get the obvious out of the way – Marsh is more than likely a Packers fan, and for that we should hate his fucking guts.  And while we do, we can’t look at him and truthfully say he’s not dominating right now.  He’s putting together one of the best seasons in the country and could be making a run at an All American campaign should he stay the course he’s on now.

6 games, 5 stars, .77 ERA, 34 Ks in 35 IP, with only 10 XBH surrendered.  This coming off a great sophomore campaign where he a 3.89 ERA over 71 IP in 12 starts.  The kid just keeps getting better and better.  Incredible when you consider he’s pitching his home games in the thin Arizona air and in a ball park as small as Phoenix Municipal Stadium.  Still though… fuck the Packers.

Next up is RJ Dabovich

Dabovich, sophomore RHP out of Colorado, is throwing the ball exceptionally well right now too.  Him and Marsh have become a really nice 1-2 punch on Friday and Saturday nights.  The contact specialist is sporting a 2.57 ERA through 28 IP by featuring a heavy sinker (this is a guess since he’s not striking out a shit ton of guys) and creating weak contact up and down the lineup.  He complements Marsh’s power pitching style perfectly.  Do I predict an all PAC12 year?  Maybe, but I’d have to look up the rest of the conferences stats and that would take too much time and I have a podcast to record in a little bit.

Aside from those two – the lineup is still doing it’s thing.  The balance is great in the Sun Devil’s lineup.  They have plenty of power and the ability to move runners and work counts and situations.  Get em on, get em over, get em in, and do so anyway you can.  Whether it’s Hunter Bishop and his .438 batting average, 1.535 OPS and 10 dingers or Gage Workman swiping a bag late in the game, the Sun Devil’s offense has shown great balance up and down the lineup and scared the ever living shit out of opposing pitching.

The Devils have a layup non-conference game against California Baptist Wednesday night (who?) to hit the 20-0 mark before taking off for Eugene, OR for a 3 game set against the 11-7 Ducks in a PAC12 battle royale.  The Ducks are a decent squad, so they can’t be taken too lightly with the Devil’s intrastate rivals coming to Phoenix for a 3 game set right after.