A couple of weeks ago I did a deep dive on Jackass’s Bam Margera, who was preparing to throw another party at his Chester County home on April 1st.

I’d gotten the green-light to attend but am actually glad/relieved to say I don’t think that will be happening now, as the reality star’s been checked back into treatment. As someone who grew up near West Chester, PA & was a Jackass fan, watching him spiral on his Instagram stories recently was just sad. And it all came to a head last Thursday, March 7th here in NYC at West Side Comedy Club.

Initial thoughts, what an absolute shit manager if he was still insisting Bam could do the show.

According to the Philly Voice:

Days after outbursts by former “Jackass” star Bam Margera surfaced online, including insults against his wife and manager, the Chester County resident reportedly has been committed to a behavioral health facility by his friends and family.

The latest trouble surrounding Margera, who left rehab after just 10 days earlier this year, came after he posted video rants to his Instagram account targeted at his wife, Nicole Boyd. Those posts have since been deleted.

Later, a video surfaced of Margera threatening his manager before bailing on a scheduled appearance at a New York comedy club. The event was immediately canceled.

It sounds hollow & obligatory, but I hope Bam gets the help he needs & that his family gets the support they need. A lot of his buddies, including Brendan Novak & Chris Raab have gone down that road & come out better on the other side. Steve-O just celebrated 11 years sober, too.

Fingers crossed that when this guy, who appears in the background of the club video nervously holding his BAM skateboard & pen, finally gets that board signed, it’s by a Bam who’s stable & healthy. 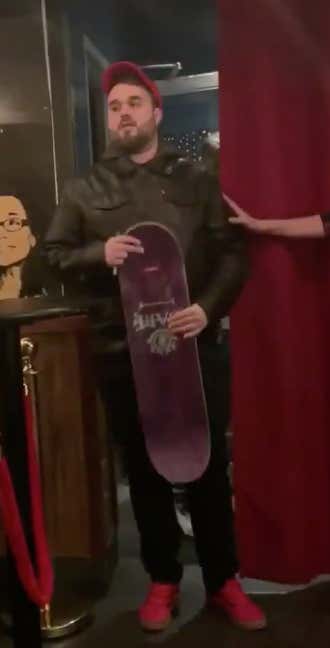