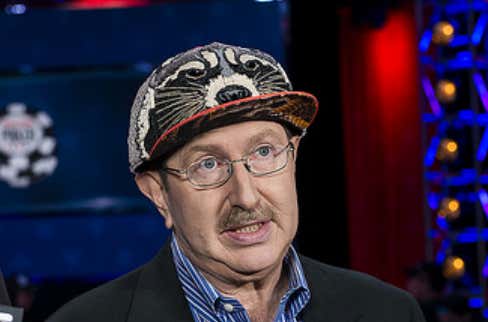 Over the weekend, Norman Chad jumped on the pile and wrote his own hit piece about Barstool. If you are like “that name rings a bell, but I can’t quite place it”, don’t feel bad. You might remember Norman Chad from making the same “my ex wife” joke every summer during the WSOP broadcasts for the last 20 years. He hasn’t made a fresh joke since the Clinton administration, but that’s neither here nor there. The point is, Norman Chad just found out what Barstool is, and it completely broke his brain. He was already a Trump broken brainer to the max, and when you mix that in with an old man who still think newspapers are the future and these new fangled kids on the internet are just a fad, you have the perfect recipe for a generic Barstool hit piece.

And boy, Norman Chad can sing the hits like no others. You know when you go to a bar and see a cover band and they go from Mr. Brightside into All The Small Things into Jesse’s Girl? Well that was Norm. By the end of the piece I was on my feet, pumping my fist, wanting an encore. And boy, did he deliver. The encore blew me away. Let’s go through the setlist though and appreciate Norman Chad for truly crushing every hit song.

He opened with an all time heater to really get the audience:

“Barstool Sports’ Dave Portnoy is a disease for which there is no cure.”

Portnoy is the founder of Barstool Sports, an overflowing toilet disguised as a sports blog. Barstool Sports exhibits the very worst of America, which, of late, is a hard title to come by. To his discredit, Portnoy has proved that crass, ugly, crude and boorish is the road to Internet riches.

Portnoy once joked that a woman wearing size 6 skinny jeans “kind of deserve[s] to be raped.” He said that anyone blocking traffic to protest racist policing “deserves to die a horrible gruesome death.” Barstool used to run a blog post called “Guess That Ass” and “Guess That Rack.”

I told you it was a cover band.

He then did the BVT jab which is sure to get some claps from the echo-chamber he’s yelling into:

It would be nice to ignore Barstool Sports, but it has a growing presence — with podcasts, on SiriusXM, even ESPN greenlit a weekly Barstool show in 2017 before someone in Bristol woke up in a cold sweat and canceled it after one episode — and the Chernin Group threw millions into the pot as a majority owner.

Wait, is “woke up in a cold sweat” a John Skipper/cocaine joke, or is Norm’s best joke completely unintentional? Heavy money is on the latter.

He then played an old timer directly into an original, which had me going nuts:

He indiscriminately attacks everything, and if you push back, he sends out his hyper-aggro, testosterone-inflamed groupie brigade — they are called “Stoolies” — to crush you.

Frankly, Peter Chernin should be Twitter-shamed for that toxic capitalism.

I mean we’ve said 1,000 times we don’t condone people tweeting vicious things at anyone, but that’s neither here nor there, because Norman Chad now wants his fan(s?) to…Twitter shame Peter Chernin? Imagine some 65 year old man on Twitter tweeting at Peter Chernin? Too funny. Again, Norm is funniest when he’s not trying to be at all.

But what really put him over the edge? Going on Fox News.

Imagine if he found out Tommy Smokes is the Vape God?

And then finally, the grande finale. The joke that hit us so hard, so crushing, that I think Barstool might finally be on the brink of tapping out. Brace yourself:

What, these cyber thugs are going to hurt me more than I’ve already hurt myself? We’re talking two divorces, two bouts of kidney stones, a weekly dose of IBS, an occasional flare up of hemorrhoids and a back that’s gone bad. I’m virtually six feet under, so I’m virtually untouchable.

Honestly, Barstool, schmarschool is so brutal. Like, why did he even waste time with the size 6 skinny jeans when he had Barstool Schmarstool up his sleeve? That’s a god damn mic drop if I’ve ever seen one.

It is great that Norman Chad is like, 5 years late to the party, but we are happy to have him. We’ve been slacking in the 65+ demo, and now that we have those eyeballs, I fully expect to start seeing VIVA stickers popping up in nursing homes across the nation.

If only grandma was here to see it.