Good God. Don’t hurt them Bernie/Larry. Don’t do it to them like that. I mean what an absolute beatdown in the stands after your team loses. That’s low key the best part about this. This happened during the Monmouth/Canisius game – which was after Siena lost to Iona.

I appreciate this guy though. I’m sick of the new dance moves – mostly because I have no idea what the hot one in the street currently is. Stay in your lane. Use your bread and butter moves. For this guy – it’s clearly his hips not lying: 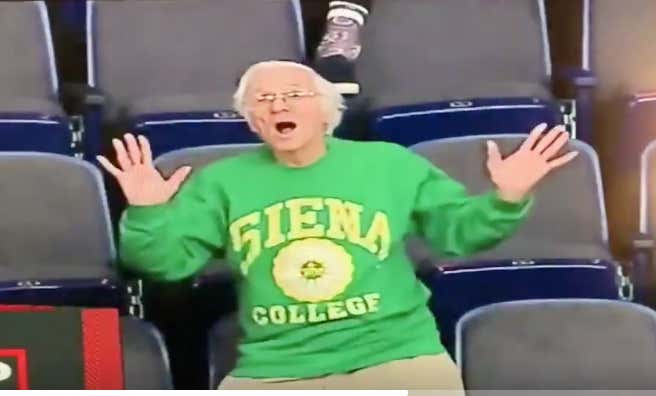 I’ve watched this video no less than 500 times already. I mean it’s unreal. He starts with almost a warmup. Shimmying his way down the row, loosening up his arms. Starting to give the people a little bit of the goods:

Just stats the swaying. You can see it in his face with that smile. He’s ready for the big time. He knows he’s about to be a star. He knows what has to happen next. There’s only one thing that could happen next.

This is when we start to know what we’re seeing is gold. The open mouth the ‘ohh’ sound out of his voice. He’s feeling it. Notice the hips. We’re getting there. It’s officially time to make this sexy.

And mission completed. Danced his sweet ass right into our hearts. Well those of us with ESPN+ and watching a MAAC semifinal game.

Just flat out beautiful. Gotta love this time of the year when fan’s leave it all out there too. We’re going to see some gold fan reactions over the next month, but good luck topping this guy.