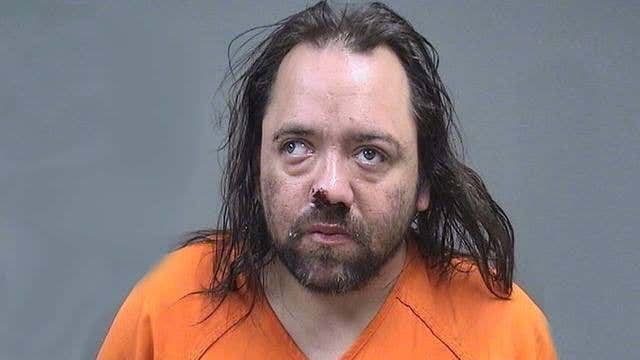 (Source)- A Struthers man was arrested after a mail carrier reported that he was following her around as she was delivering the mail. Justin Stamp, 36, was booked into the Mahoning County Jail on Wednesday on a menacing by stalking charge.

According to a police report, Stamp told the mail carrier that she was “very beautiful” and asked her what she likes to do for fun as she was on Como Street, delivering mail. The mail carrier told police as she was walking away from Stamp, he commented, “There’s going to be another standoff.” She said Stamp was then pacing in front of a house on Como Street.

No offense to Mr. Stamp, but you simply cannot be doing anything resembling stalking if you look like that. You cannot creep, lurk, prowl, linger or anything of that ilk with that face, haircut, wonky eye, and busted ass nose. Cannot. Do. It. And you DEFINITELY cannot start acting like a weirdo by calling a random girl beautiful before you follow it up with some good old fashioned standoff talk. That’s just Day 1 life stuff.

Now I admittedly know nothing about Justin Stamp’s personal life outside what’s in that report. The first result that comes up when you Google his name is a LinkedIn profile for an investment banker.

Could the man in that picture be an investment banker? Maybe, maybe not, maybe fuck yourself. But I would personally be very surprised if that man knew how to (fill in whatever the fuck an investment banker does here). However if you tell me that guy with the last name STAMP is a perp that does freaky shit in broad daylight to an innocent woman that just wants to deliver 8 zillion Bed, Bath, & Beyond coupons, some bills, and whatever else is actually mailed in 2019, I would probably believe you. Again, not throwing around accusations, but stating a very correct opinion.