Yiiiiiiiiiiiikes. That seems like a great way to be on Dana White’s shit-list for the rest of your life!

If you’re unfamiliar with Colby Covington, I’m incredibly envious of you. He’s the single most cringeworthy human being on the planet.

He’s the UFC Interim Welterweight Champion (or was, I guess, before he was stripped of it – it’s all confusing), and his entire personality is that he voted for Donald Trump. Liiiike, I literally couldn’t name another discernible characteristic or trait of his. He just yells constantly about how great Trump is, and how he’s gonna make the Welterweight Division “great again” like Trump has made America “great again”, and like, if you’re a Trump guy, cool. I don’t care. If you dedicate your life to him – you’re a fucking loser.

Predictably, Colby’s also constantly in hot water for racist/homophobic remarks he makes in attempt to promote his fights – calling all brown people “filthy animals” and everyone else “faggots” – and he honestly believes he’s doing well despite having considerably less Twitter followers than me. He’s also been called out by anyone and everyone that’s ever come in contact with him over being a keyboard warrior who would NEVER say in person what he says online to everyone he “calls out”, and my friends working backstage at UFC events have shared with me some preeeetty funny videos displaying just how quiet and standoffish of a guy he truly is, but I digress.

Colby earned himself a Welterweight Championship opportunity when he defeated Rafael dos Anjos for the division’s Interim Championship back in June, but turned down the fight with Tyron Woodley multiple times over the past few months due to injuries, some disclosed, some not, eventually making Dana White and the UFC matchmakers decide that the division couldn’t be held up any longer, booking Kamaru Usamn in the spot Colby was supposed to be given this weekend at UFC 235.

He didn’t take too kindly to that, and showed up in Vegas yesterday to “crash” Usman’s open workout…

…with a Fisher-Price bullhorn.

Pssst – Colby, if you’re gonna go for it…go for it. 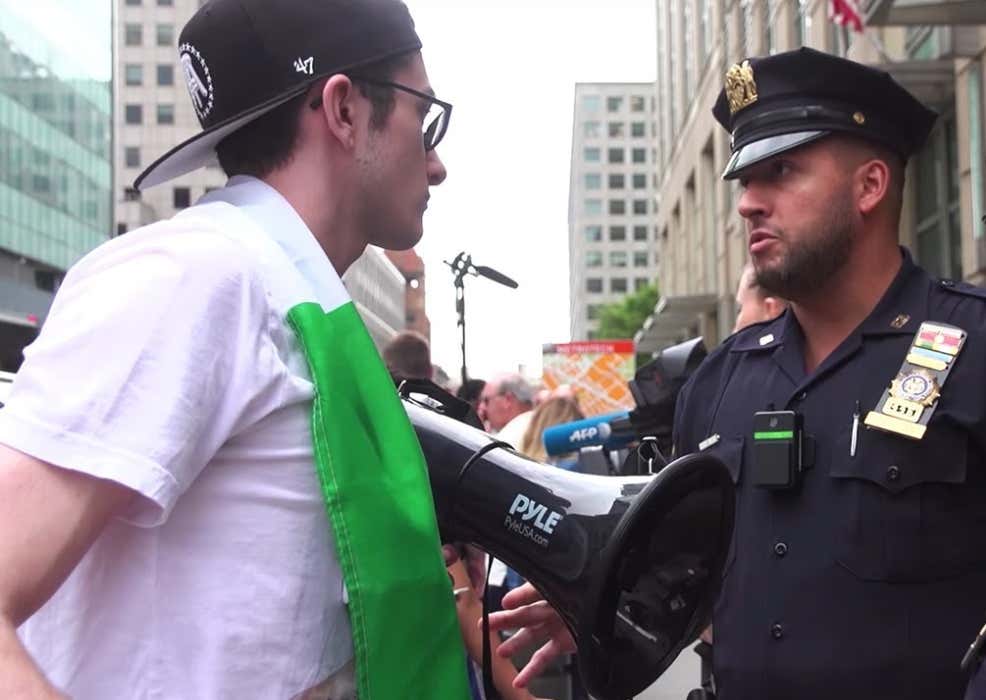 Afterwards, he went looking for Dana White on Instagram Live…

…and shockingly, FOUND HIM!

Dana didn’t seem too pleased about this, nor did the random chick sitting next to him who bounced faster than you could say MAGA.

Colby turned the camera off real quick when asked, putting up zero resistance, and I can’t imagine the talking-to that followed. If I know one thing, it’s that you do not fuck with the big goof. He will cut your ass and leave you asking for spare change on the streets before you know it, and honestly, I hope he does. I’m sick of this loser and his weird ass tick where he forcefully smiles in-between sentences.