We all know Anthony Davis is going to be on LeBron’s next episode of The Shop tomorrow, so when I saw this clip on my timeline I couldn’t help but laugh. What an outrageous lie here by Anthony Davis. He’s doing what he wants to do and not what somebody tells me to do? Are we sure about that? Let’s just revisit the facts here. I don’t doubt that AD wants out of New Orleans, why wouldn’t he. The thing is, he came out and said he wasn’t going to deal with this until the summer and wanted to play out the season. Well, then the next thing you know he signs with Klutch, we got near the trade deadline and all the sudden he publicly demanded a trade in an effort to force his way to LA. We’re to believe that everything that went down over the trade deadline was Davis’ idea? I have a hard time believing that.

To be fair, this is a sound clip that’s out of context and all that, but that doesn’t mean it didn’t make me laugh. To think that AD isn’t being influenced by LeBron and Klutch is simply outrageous. Look at LeBron’s face when he said that! 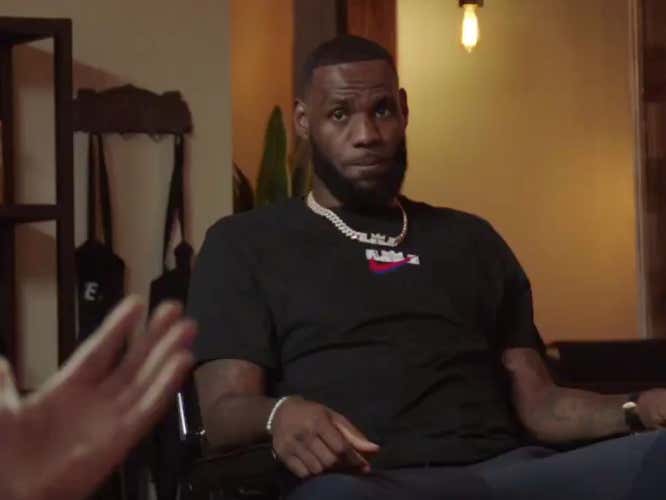 If that face doesn’t scream “Anthony, I told you what’s going to happen. You do not have a say in this. We had a conversation that this was not up for debate, what are you saying” then I don’t know what is.

So I’ll ask you, on a scale of 1-10 how bullshit is that quote? I’m not even ready to rule out the possibility that Rich Paul demanded he say something like this on TV so that it would be shared a billion times and everyone would try and back off the Klutch scent. Name one thing that both LeBron and Rich Paul do that isn’t extremely calculated? First it was at the All Star break where all of the sudden there was no “destination” list after Klutch failed to get him to LA. Now we’re to believe that Davis is making his own decisions? Yeah OK