Another Wednesday, another episode of Survivor in the books. Pretty solid episode last night. As I said last week, pre-merge can be a bit of a drag sometimes. After the merge is when it really kicks into high gear. We have more characters now though which does lend itself to better content.

Before I get into the recap, I just want to say that Survivor needs to bring back the classic intro music. Here’s an old one.

The episode started off with a scene of Reem on the Edge of Extinction island. She was falling apart. Crying about wanting to make her kids proud and all that nonsense. I hate waterworks on Survivor. She has a camera crew with her and a little shelter. Suck it up or leave.

We got teacher Ron leading these stupid dances. At first, I couldn’t decide if I liked him or hate him. But when you have the whole tribe dancing around, I’m gonna hate you.

I don’t watch Survivor for dance parties, I watch it for the hate and drama.

Aubry seems like she might be in trouble. The montage clip of her going around to every tribe member saying, “I see a lot of myself in your game” was laugh out loud funny. Nice job, editors. It’s not the worst move from Aubry, but you have to be more careful about it. Personally, I would just find one similar interest to bond over with everyone, and sometimes lie about them if I had to. “Oh you’re a chef? No way. My dad’s a chef too. I’ve been around kitchens my whole life. I have such respect for you guys.” Shit like that.

We also had an idol hunt at each tribe. Group idol hunts are tricky, but I think I like them. Here’s my thinking: You don’t want to be shady and sneak off alone for an idol. If you do it in a group, it’s much less sketchy. HOWEVA, if you do find the idol in a group idol hunt, you’d be an absolute moron to tell anyone if you find it. Stuff that shit in your pants and say, “Damn can’t find anything.”

I’m going to start off by saying that I’m extremely woke on Tourette’s Girl Wendy. Last week she told everyone about her Tourette’s and was doing random click sounds and shit all over the place. Last night? Nothing. And she had a scene where was talking quite a bit. Look, I don’t know how Tourette’s works so don’t want to offend, but I’ve got my eye on her.

Rick and David have formed a strong bond. I’m all in on this alliance. Just a couple of funny betas. I think they can be very successful together. A funny quote from this was David saying how The Wardog “doesn’t like talking strategy until absolutely necessary.” Love that. Classic Wardog.

In their idol hunt, Lauren was successful. 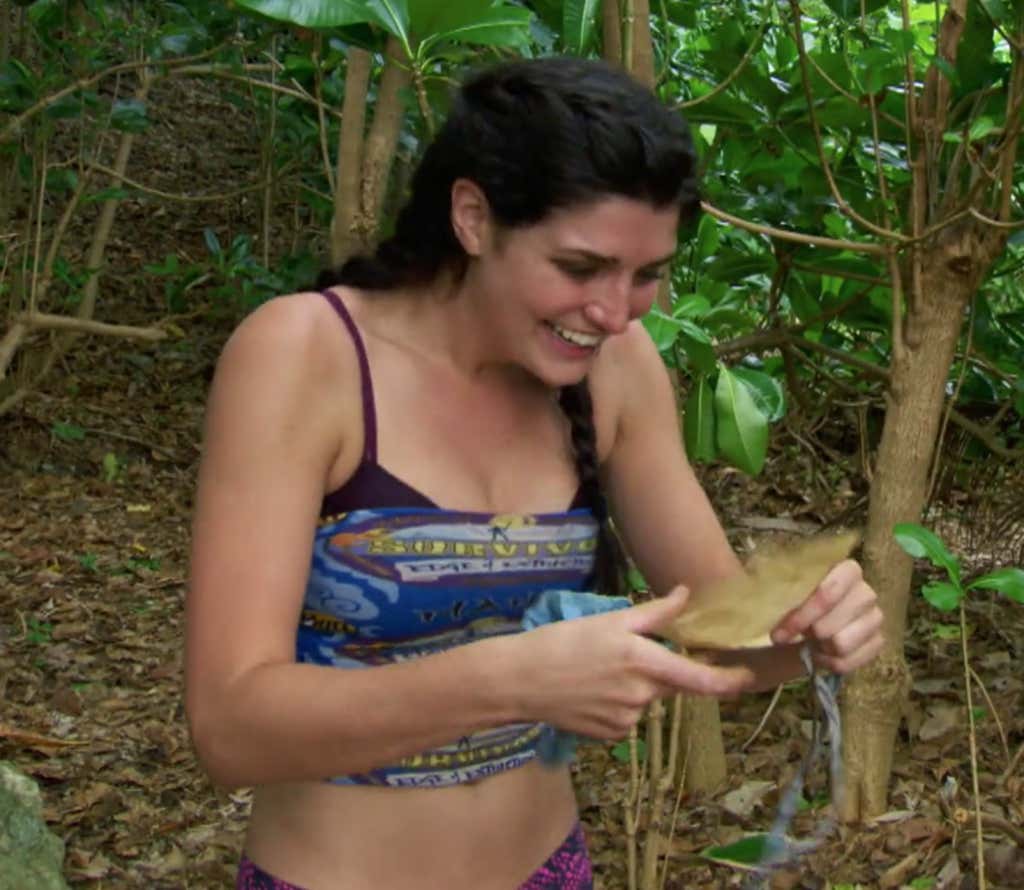 Would be a real shame if she stays on our screen for awhile. Real shame.

If you’re going to go on Survivor, you should practice two things: untying knots and swimming. Keith clearly did not get the memo on the latter. 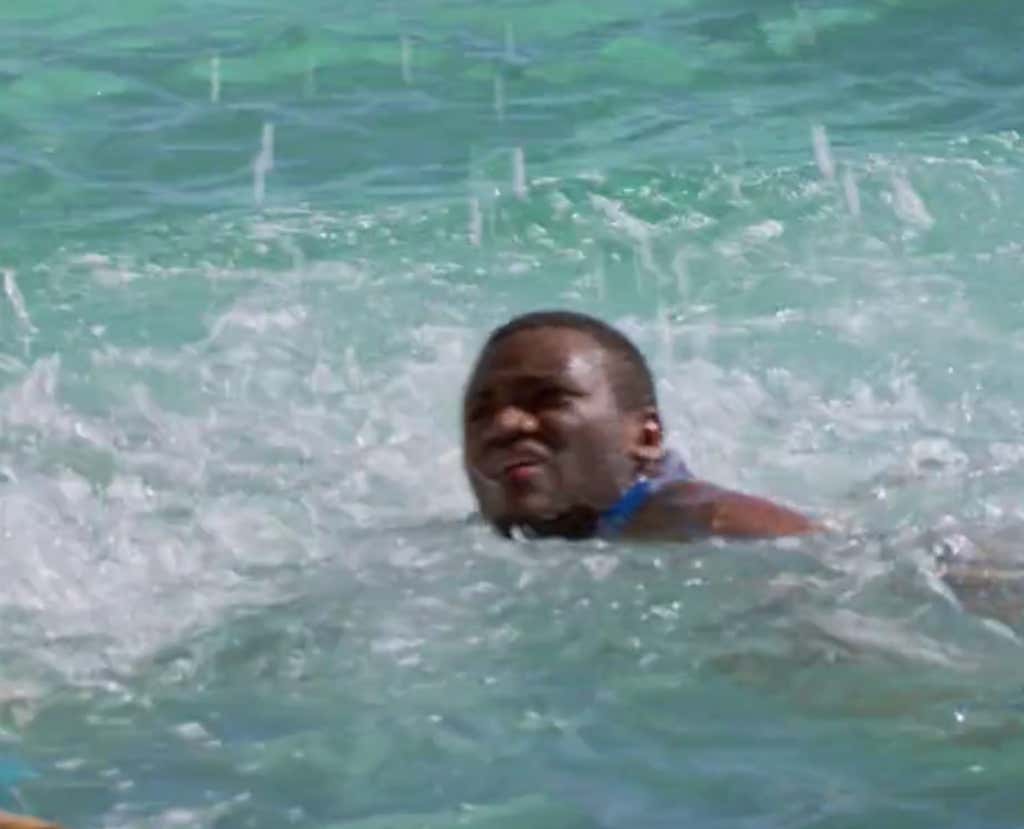 The blog title “Just Learn Swimming” is a play off “Just Keep Swimming” from Finding Nemo. In case that wasn’t clear.

He put his tribe in a massive hole. He tried to make up for it on the ring toss, and was arguably even worse at that. Survivor tip: Never volunteer for any part of the challenge where the spotlight is solely on you. If you fail, you’ll get a lot more blame than you would get credit if you succeed. Just do the main parts of the challenge and try to blend in. Keith clearly did not take this advice and the ring toss dug his hole even deeper.

That challenge performance put Keith squarely on the chopping block. Wendy was also on the block for being a liability in challenges and not part of the majority alliance. Wentworth’s name was also being discussed and it looked like they’d have the numbers to do it – Chris, Rick, David, Wendy, Keith.

But The Wardog made a strong case for keeping Wentworth. A tribe swap is likely coming soon so why bother keeping the tribe strong? She’d be better to keep around at a swap where a target would be on her back. I fully support this thinking from The Wardog. Not bad for a guy who doesn’t really do strategy.

They ultimately decided to boot Keith. He gave one of the most ironic exit lines in Survivor history. “You think ya’ll are still gonna win challenges?” Newsflash moron: You have not won challenges. And the reason is YOU. Just a stunning lack of self-awareness.

He walked out and was presented with his choice to leave or take the torch and stay in. So what did he do? He paced around, cried, and begged Jesus for a sign. What an absolute pussy. They chose this guy to play the game over me?!?! You’ve been out there 6 days man, just stay.

They didn’t show his decision, which is annoying. I think every episode should conclude with that decision. I think he does decide to stay though, because otherwise we probably would’ve seen his exit speech. But we’ll see. The last scene just flashing back to Reem was funny. Had kind of forgot she was still out there chilling.

I’ll keep a running ranking all season of who I think has the best chance to win. This is not a power ranking of who’s least likely to get voted out next. It’s power ranking who can actually be Sole Survivor. It’s based on what us superfans call “edgic.” It’s a mix of logic and edit, paying attention to how certain people are portrayed and if they have that coveted “winner’s edit.”

I am going to leave voted out players in the rankings since they’re technically still alive, just at the bottom.

Adding returning players this week, just an honest mistake leaving them out last week. I’m getting rid of the tiers though.