This is Blog part 6/6 before we run back the new version starting next week. Please keep it coming. No story is too small. 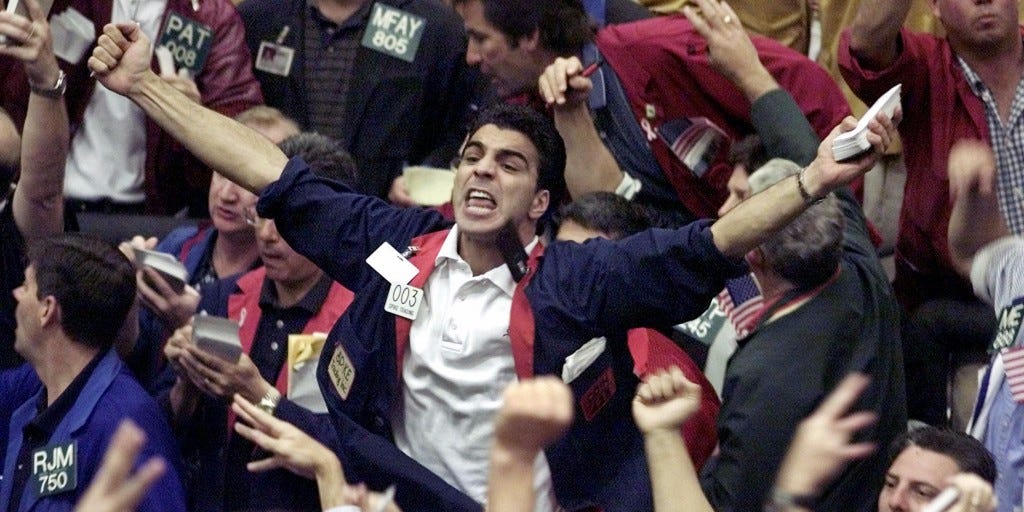 Good morning Sports Fans. We're back for the 6th installment of Traders Are Insane - an ongoing series where I share stoolie submitted stories about working in the trading industry. If it's your first time, I encourage you to check out previous versions here:

The point of this is simple. The trading industry is stockpiled with some of the most outrageous behavior of my lifetime. As you will see below, a lot of this goes back to the 80's and 90's. Different era sure. But I think we can all agree those were simpler times with respect to recreational drug use, extramarital affairs and renting a private helicopter to win a golf bet.

I've said it before, I'll say it again. You literally cannot make some of this shit up. Let's get to the stories.

I was working at a trading firm last year. We traded energy options and futures. The market was not volatile at all during that time which basically means things weren't overly crazy.

After the very hot start, New Guy gets a call from our internal Risk Team. They're in charge of making sure we don't burn the place down on our positions. They basically chew him out for wiping his ass with all their risk parameters. He knows better.

After the meeting some big OPEC news hits on moil and the market has its biggest move down after some OPEC news.
His position reverses and now he's down 150,000 instantly. Risk Team calls him up again and says knock it off. Obviously he ignores them and doubles down on Brent Crude, again and promptly loses 210,00 the next day. Never seen anything like this guy.

Before the end of the day, the head boss comes over to New Guy's desk and proceeds to pour a pitcher of water all over his keyboard and torrent (probabaly 5k of equipment) while yelling to get the fuck out.

On his way out of the office, New Guy punches a 2ft diameter hole in the wall and slams the glass door to the office shattering it everywhere. He eventually is carried out by the building security picked up the cops and went to jail.

All told he lost nearly a quarter million but only paid for the wall, door and court fees. Btw came back 2 weeks later to pick up his “lucky” Jobu mascot like the one from Major League.

There's nothing positive about being the New Guy. Everyone hates you including yourself. If you're starting a new job, pretty much any time ever, tread very lightly because it's unavoidable. Also, don't lose $250,000 in your first week.

It was my first year I started, 21 yrs old no college degree, lived at home. Naive to the world. I get hired to clerk for a friend of a friend. The broker next to me was around my dad's age and every day is telling me stories about how he's banging this and snorting that and his wife has no clue. I'm looking at this guy trying to imagine my dad like this and I can't. Just an impossible thought of my dad railing hookers and blow.

One Monday the guy comes in and says "My wife almost caught me this weekend" I ask what happened. The guy says "The old lady is supposed to be out for the night and I'm banging the housekeeper on the dinning room table" The garage door opens and he hears the old lady's car pull in. The guy has the housekeeper hide under the dinning room table naked while he eats dinner with his wife. The wife never found out. He's laughing his ass off as he's telling me this and I'm standing there with my mouth open picturing this guy as my dad. Fucked up summer but holy hell did I learn a lot.

Get To The Chopper

Back in the early 90s, me and a few guys I worked with all belonged to the same country club. One year during the member/guest golf tournament, my buddy's briongs some big shot guest. No clue where he made his $ from but this guy was awesome. Could talk to anyone and everyone loved him. Clearly a high roller.

The member/guest tournament was thurs-sun so it was a long 4 days. On Sunday our 4some wasn't even in the final flight but we had massive side bets going, it was down to the 18th hole and me and my guest were all square with my buddy and his guest.

I go up to the tee box and I had noticed the guy has been on his phone all morning giving bizarre orders to someone on the other end - "yeah come right over the hole", "as many as you can fucking find." "i'll tell you when". I'm about to tee off and a FUCKING HELICOPTER shows up, this guy is going NUTS hysterically laughing, on his phone going NOW NOW….out of the helicopter drops, no joke, thousands of ping pong balls right on us/course. It was the most absurd thing I've ever seen in my life. Needless to say we lost.

I know we talk a lot on this website about Fuck You money and Real People Rich stuff. Whatever I'm allowed to take back I want to take back right now. From here on out you don't have real money until you can casually call a helicopter to your 18th fairway for no other reason than to fuck with someone you just met.

Me and 3 trader friends took a Super Bowl trip together back in the 80's. We left Chicago on Thursday morning from O'Hare and all 4 of us were on the diet craze of the 80's called COCAINE.  We were heading to Florida for the Superbowl and maybe a round or two of golf. We got settled at our hotel and headed to the golf course. After drinking and sticking to our diet we finished up the round and headed for a strip joint. We stayed there all night and then waited until they opened up again for lunch on Friday. Obviously by now we were all in love with someone inside and had to see her again. We end up drinking and staying there until close again.

It was late Friday night /Saturday morning when one of us decided we needed to actually eat and maybe try a normal activity. We had already seen more pussy than Magic Johnson did in the 70's and 80's combined.  I'm not sure which genius decided let's go to Disney World.

At the time it sounded like a good idea.

We end driving to Disney and stumble on in. After walking around for a few minutes someone declared , "Lets get stoned and grab something to eat". Great idea but now it's midday at Disney and people are all over the place. We decide to all get on the open ride that goes above the crowd across the Disney grounds.

We get up there, light a joint and everything is working out. Then the ride stops and there is mechanical difficulties. We are stuck 100 feet above all the crowds at Disney with no where to go and nothing to do. Being degenerate gamblers we start playing liars poker. That lasts for a little while until we get bored. Then we just started checking out hot moms walking below us. Then the fun began.

One of the guys with us drops a $10 bill into the crowd and we all watch what happens. This guy see's it on the ground and tries to put his foot over it and sneak it in his pocket. We start yelling and he doesn't think enough to look up and see us, good laughs. Then another guy, the big winner of liars poker decides to make it rain singles into the crowd below. Not thinking this through, a fucking mob scene occurs and people are pushing little kids aside to grab money. Fucking hilarious scene, until it wasn't. We are having fun so now we are dropping cash at a good rate and the place is going crazy, it's mayhem.

All of sudden the tram starts working again and we get a big applause from the crowd below until we get to the end of the ride. Standing there with Goofy, Donald, Mickey were Florida State Troopers who promptly brought us to an office to have us arrested for causing a dangerous mob scene and banned us from Disney.

This was tough to explain to my wife years later who wanted to take our kids to Disney and I said how about a waterpark instead.