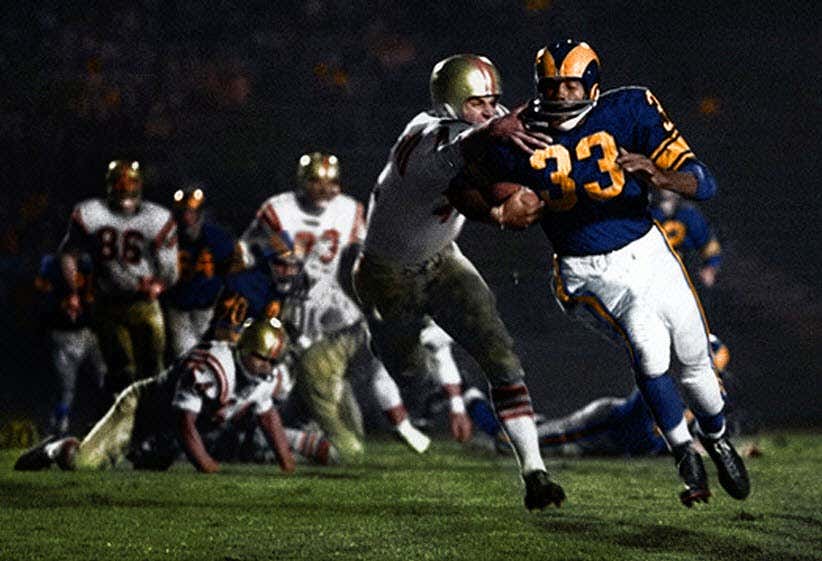 The Los Angeles Rams acquire Ollie Matson from the Chicago Cardinals sending a cache of nine players in return. Matson had been an All-Pro in five of his first six seasons with the Cardinals as one of the league’s top running backs. None of the nine players the Cardinals received in the deal had any impact on the Cardinals future as they moved to St. Louis following the 1959 season.

Ollie Matson was born on May 1, 1930, in Trinity, Texas. Raised in San Francisco he attended the University of San Francisco playing football and star in track. Drafted third overall by the Chicago Cardinals, Matson won two medals in the 1952 Helsinki Olympics, taking home a Bronze Medal in the 400meters and a Silver in the 4×400 Relay.

Playing for a Cardinals team that was forever lost in the shadow of the Chicago Bears, Ollie Matson became the beacon of hope on the South Side, as he was named to the Pro Bowl Roster and chosen as an All-Pro in his first NFL season. That year Ollie Matson would share Rookie of the Year honors with Hugh McElhenny of the San Francisco 49ers. After missing a year due to military service, Matson again was an All-Pro in 1954. He continued to be among the NFL’s top running backs throughout the rest of the 1950s, as he was named an All-Pro five times and made the Pro Bowl roster in each of his first six seasons.

At the same time that Ollie Matson was staring at the University of San Francisco, a recent graduate began working in the Sports Information Department name Pete Rozelle. As Matson began his NFL career, Rozelle too was moving into the professional ranks with the Los Angeles Rams, where he had previously been an intern. Rozelle would later start his own Public Relations firm, but returned to the Rams in 1957 as General Manager, where he openly coveted Ollie Matson.

After trying several times to land Ollie Matson, the Cardinals finally agreed to send him to Los Angeles, getting back a king’s ransom in return. The nine-for-one deal was the biggest trade in NFL history at the time. However, none of the nine players did anything of note for the Cardinals. Ken Panfil an offensive tackle played in the 1959 Pro Bowl but struggled in the final three years of his career as the Cardinals moved to St. Louis. Defensive tackle Frank Fuller also was on the pro bowl roster his first season, but like Panfil faded over the last three years of the deal. DT Art Hauser spent just one season with the Cardinals, as did Rookie Running Back Larry Hickman, chosen by Los Angeles with the #31 pick before he was a part of the nine-player package. John Tracey also drafted by the Rams and traded also traded did manage two seasons with the Cardinals, while Defensive End Glenn Holtzman and Running Back Don Brown were cut in training camp.

The Cardinals also got a pair of 1960 draft picks in the deal a second and fourth round pick. The second-round choice was used to pick Duke Lineman Mike McGee who spent three years in St. Louis, while their fourth round Silas Wood a receiver out of Marquette did not make the roster out of training camp.

Ollie Matson did not exactly pan out in Los Angeles, as it was clear he was in decline over the next four seasons, as the Rams struggled to win games. Matson would finish his Hall of Fame career quietly playing one season with the Detroit Lions and two with the Philadelphia Eagles. Pete Rozelle the GM behind the deal would leave the Rams after the 1959 season to become the NFL’s new commissioner a post he would for nearly 30 years. One of his last acts as commissioner was to approve the Herschel Walker trade from the Dallas Cowboys to Minnesota Vikings that nearly mirrored the great Matson trade.